Update 8 March 2013: Chika informed me that her sister has a website for her restaurant  which you can check out at http://www.okada-izakaya.com/ (it's in Japanese).

Karen’s Japanese friend Chika has a sister who is a chef. We had dinner at her restaurant in Osaka and ate the most amazing meal of our trip!


Chika’s sister had one year training at a cooking school and then took up an apprenticeship at a prestigious Japanese restaurant where you were required to make a reservation in order to get a table and lunch would cost at least 10,000 yen (over $100 in Australian dollars). At this restaurant she met her husband and they opened their own restaurant together.


Located in Osaka, the restaurant is called ‘Okada, Tori, Umi, Yamano-sachi’. I asked what this meant and in English it translates into the Okada, Chicken, Ocean and Mountain restaurant. It’s pretty self-explanatory - Okada is the family name and the restaurant specializes in a chicken dish, all fish come from the ocean and all vegetables come from the mountains.


The restaurant has traditional style Japanese dining where you are required to take off your shoes and sit at low tables on cushions. 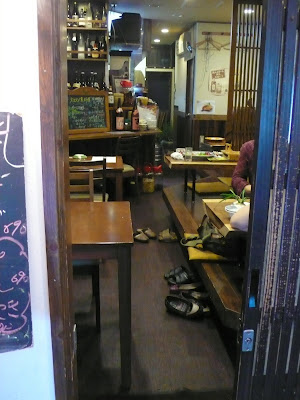 Japan as an island nation and its coastal waters support a variety of fish. It is one of the world’s greatest consumers of seafood. At this meal I consumed a number of fish that I have never eaten before.


We were served an elaborate 10 dish meal!


• Fried eggplant which had been boiled and seasoned with dried shrimp. 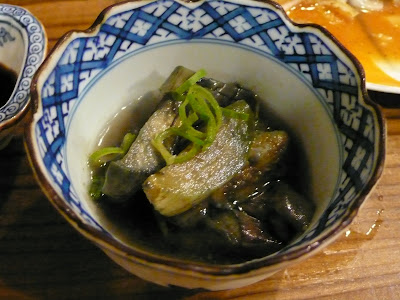 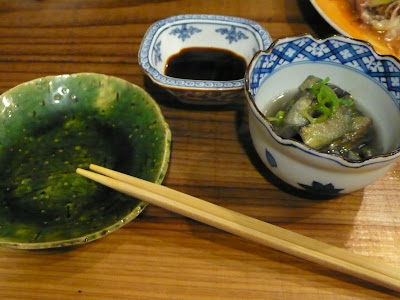 • Bonito fish with fried garlic and vegetables such as onion and daikon. 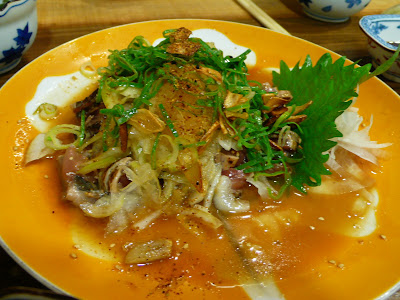 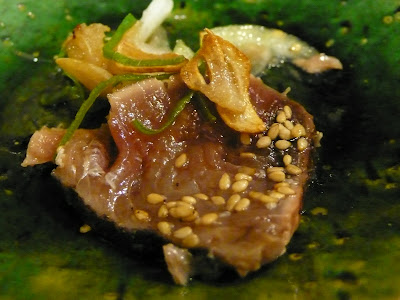 
• Croquette cake which is a French inspired dish with a bready crust and a crème filling that contained little bits of seafood. 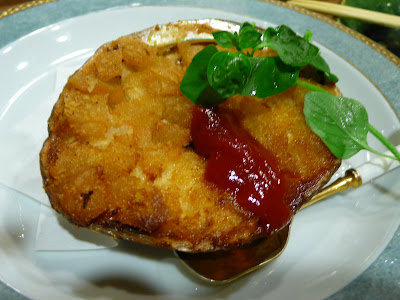 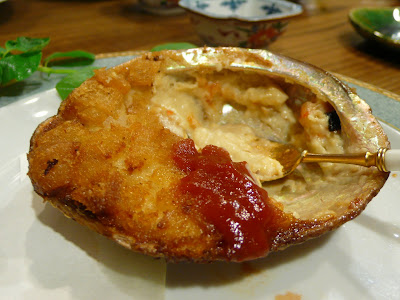 • A very hearty and warming lotus root and daikon soup (this soup was amazing…soooo good!) 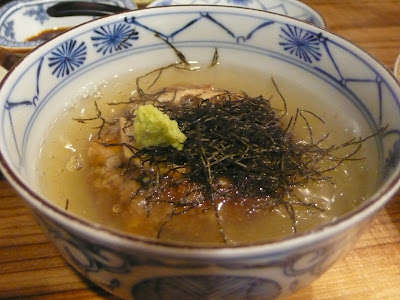 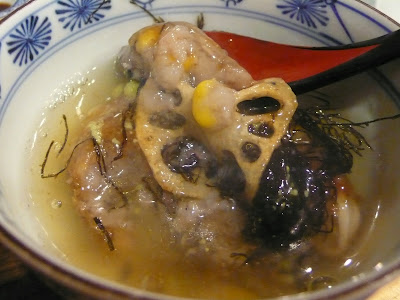 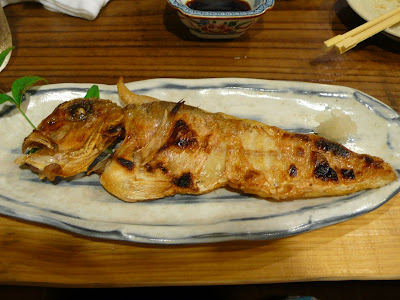 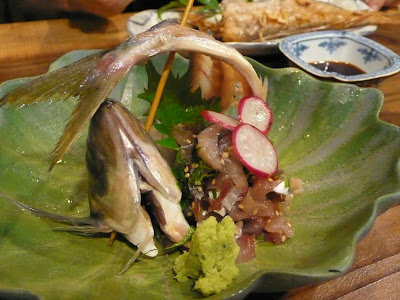 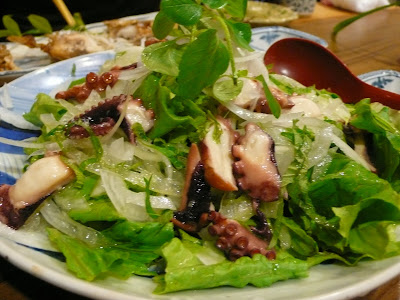 • Bream fish in a rice soup served with a dish of pickled vegetables. 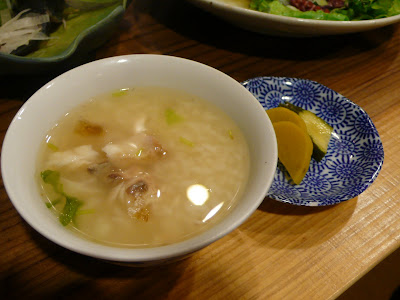 • Baked chicken with a dressing made from sudachi (a Japanese citrus fruit) with a side of fried thinly cut potato crisps. 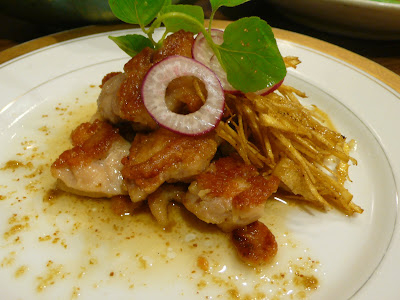 I asked what sudachi was and the chef brought me out a little saucer of grated sudachi to taste and it was quite pungent, it has a much more zestier flavour and aroma than lemons or limes. 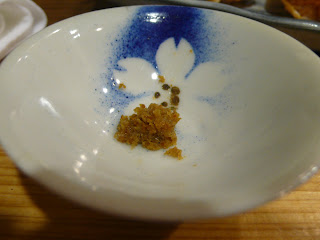 • Desert - Japanese squid rice flour balls topped with some bean paste and a maple leaf (no it’s not a marijuana leaf). 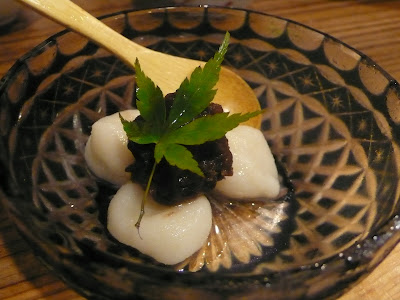 • Of course no Japanese meal would be complete without some green tea served at the end of the meal. 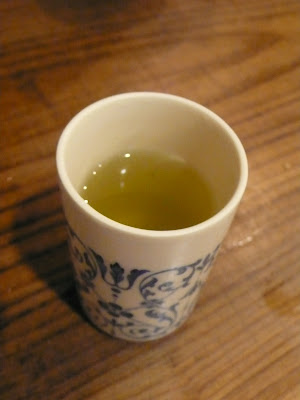 Please note that the only way to eat such a feast is to have it spoon fed to you by a cute Japanese girl. 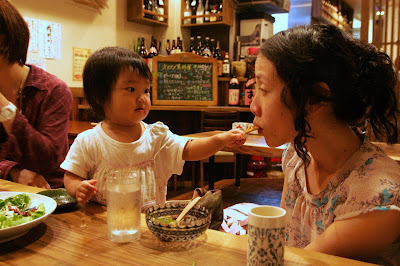 The cute girl on the left is Chika’s niece/the chef’s daughter and the big baby on the right is moi!


Because Chika’s sister was the chef, I was able to get a bit of a chef’s insight and she was very generous in telling me about what was in the dishes cooked.


Salarymen sat at the table next to us and they ate a very elaborate meal presented on a wooden boat. 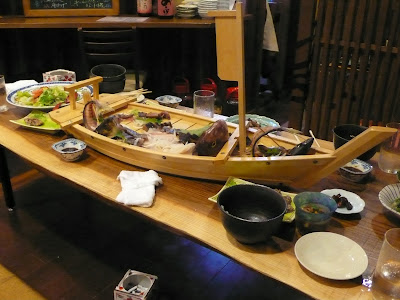 To this day, this was the best meal that we had in Japan (in my opinion). Everything tasted amazing, it encompassed everything Japanese food is about – the use of fresh seasonal ingredients, simply cooked with light and delicate, subtle flavours which are beautifully presented.


Unlike Chinese, Vietnamese or Thai food, Japanese is not characterized by spiciness, richness or complexity of flavour - Japanese food stands apart from all other Asian food because of its simplicity and purity.


No wonder the Japanese have one of the most healthiest diets in the world!


If you are ever in Osaka, I highly recommend having a meal at - 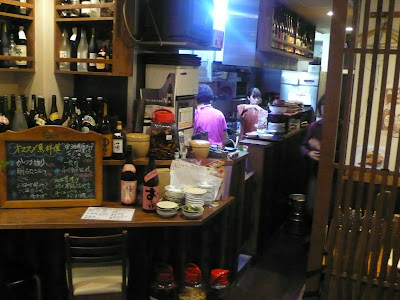 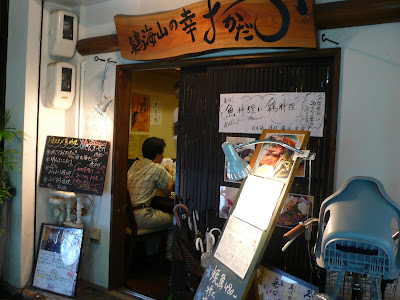 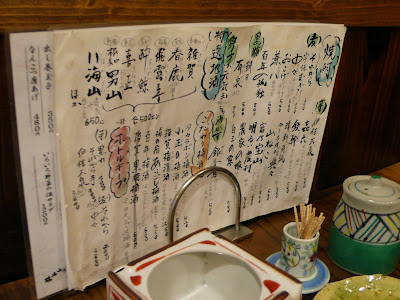 Posted by Blue Apocalypse at 9:09 AM