My holiday in Japan was awesome but it’s good to be back home. It’s so nice to be able to sleep in a normal bed with a real pillow, I like using toilets which do not confuse me and I miss eating lots of fresh fruit and vegetables, and simple hearty home cooked meals. I am also over eating raw fish, we ate a lot of sashimi in Japan and some of it was amazing but some was not so great…by the end of our trip we were avoiding raw fish options and looking for cooked foods…
When you travel to another country you always experience culture shock.
•    The transport system of trains and subways in Japan is both awesome and insane! It’s awesome in that it can get you anywhere and is really efficient, and if you miss a train you can expect another one to come in a few minutes. It’s insane in that if you are a novice to it all, it can be quite confusing! All maps of subway routes and railway lines look like a double rainbow spider web. There are many different companies that operate the trains and subways. You have to figure out what line to catch and then which company runs the line and make sure you get the right ticket. Then you have to determine if you want the ‘rapid’ or ‘local’ line and be sure that the train will actually stop at your stop. Sometimes you might catch a train and then transfer to a subway and then transfer to another train! As an American traveller we met at our hostel in Kyoto put it to us - “the Tokyo transport system is brutal”.
•    Throngs of people…everywhere. Coming from Perth it was quite overwhelming - 2.25 million versus 128 million! Perth is small and when you are out and about, you are always scanning the crowds of people you pass because most of the time you are bound to bump into someone you know…this becomes an automatic brain activity…your brain is constantly scanning crowds for familiar faces…even when you are in Japan! As we travelled around and passed hundreds of thousands of people everyday we had to keep our head down to the ground and stop looking at people to keep our brains from working in overdrive trying to scan crowds for familiar faces!
•    Japan is quite a monolithic culture. It made me realise that Australia really is a multicultural society in that when I am out and about I see people from all different cultures/races but in Japan almost everyone in Japanese, there are very few foreigners (or "gaijins" to the Japanese). The lack of gaijins was notable in Osaka and Nagoya but when we got to the more touristy areas like Kyoto and Tokyo we noticed a lot more gaijins. This made us feel less special because for a while we thought we were the only gaijins.
•    Japanese toilets are on another level. Some toilet seats would begin to warm up when you sat on them, some automatically flush on you, some produced sounds of flushing water while you are doing your business (this is supposed to smother the sounds of your business time), sometimes I had trouble working out how to flush the toilet, some had special functions which I was too freaked out to use – no I do not really want to squirt water up my arse.
•    There is no eating while walking. When you travel, all you do is walk around heaps and eat heaps so doing both at the same time is purely practical but the Japanese look down on this type of behaviour. But when you are a tourist, you don’t really give a shit…did we eat while we walked? Shit yeah! Onigiri from 7 elevens where lifesavers, a great rice ball snack to eat on the run. 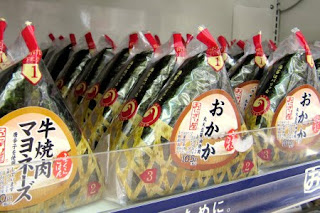 Check this video for how to eat onigiri – unwrapping this thing was tricky!
•    There are no bins around Japan. For a country that prides itself on being very clean – there is nowhere to put your rubbish, you have to carry it around with you...maybe this is how they discourage people from eating while walking (!)
•    The Japanese overpackage everything! If you buy a piece of cake from a bakery you can expect it to be placed in a box, then put in a paper bag and then put into a plastic bag…I think this may be another way that the Japanese discourage people from eating while walking (?)
•    There are always two lanes formed when riding an escalator, people who choose to just stand stay to one side to provide a clear lane for others (who may be in a hurry) to walk pass. Worldwide, people respect such escalator etiquette because you do not want to be in the way of someone who is trying to rush up an escalator. When you travel around to different parts of Japan - the standing side changes. In the Kanto area (where Tokyo is located), everyone stands to the left and walkers pass on the right. In the Kansai area (where Osaka is located), everyone stands to the right and walkers pass to the left. Way to be confusing Japan!

•    Riding bikes without wearing helmets. Coming from a country where the wearing of bike helmets is mandatory, it is always surprising to be in a country where people ride around without a helmet and everything appears to be in harmony. It makes you wonder what the big deal over bike helmets is…but what about the children?…have you thought about the children?...well in Japan there are none, I mean there are fewer children (ie: Japan has a declining birth rate).
DAY ONE IN JAPAN
We flew into Osaka from Cairns and the in-flight movie was Valentines Day (they say that if you can’t say something nice, don't say nothing at all…so I have no comment about this movie). We successfully navigated our way through the transport system and made it to the guesthouse we were staying at and settled in. The first thing on our agenda was to eat some food. Thankfully in Japan there are restaurants which are open at all hours, it’s easy to get some dinner late at night.
We went to a restaurant that specialised in one of the dishes Osaka is famous for - a Japanese savoury pancake called Okonomiyaki.
When we sat down and tried to order we experienced what would be a recurring problem throughout our trip. I was travelling with my friends Karen and Crispin who were to the Japanese ‘gaijin’ aka Westerners/Foreigners. I also consider myself to be a gaijin but I am an ABC aka an Australian Born Chinese, so people would often mistake me for being Japanese. Whenever we were at a restaurant, the staff would automatically start talking to me thinking that I was Japanese and I would express that I didn’t speak any Japanese. We would then try to attempt to order in broken English, with lots of pointing to pictures and hand gesturing, consulting the lonely planet Japanese phrasebook for words to recite (but beware a slight mispronunciation can result in a completely different meaning) …as you can imagine…we were completely lost in translation…and the staff would just look at me desperately as if to say “hey sista, help me out here”…but sorry, I am not Japanese.
Okonomiyaki is made up of a batter consisting of flour, grated yam, water or dashi, eggs and shredded cabbage, and you can add in any other ingredients you want such as meat (pork or beef), various seafoods (like octopus, squid, shrimp), vegetables, kimchi, mochi or cheese. The name is derived from the word okonomi, meaning "what you like" or "what you want", and yaki meaning "grilled" or "cooked". So okonomiyaki literally means “grilled as you like it” and this makes sense as you can basically put anything you like into it. The batter and other ingredients are fried on both sides and the cooked okonomiyaki is topped with Japanese mayonnaise, an otafuku/okonomiyaki sauce (similar to Worcestershire sauce but thicker and sweeter), katsuobushi (bonito flakes), aonori (seaweed flakes) and pickled ginger (beni shoga).
The okonomiyaki restaurant we went to had tables fitted with a special hotplate so that you could mix and grill the ingredients for the okonomiyaki yourself, but we have never cooked okonomiyaki before so we indicated to the waitress that she should cook it for us. 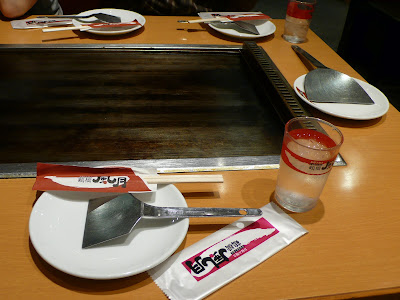 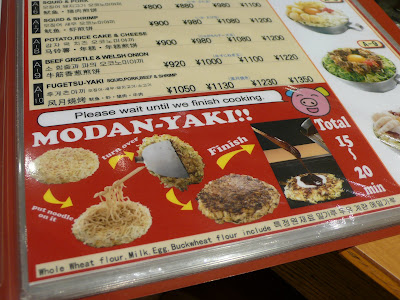 I really enjoyed eating okonomiyaki, I like concept of it and look forward to creating my own versions of it back in Perth. Okonomiyaki also makes me think of kebabs. It’s the perfect tasty, greasy and messy food that you would want to eat when you are drunk at 2am in the morning….well maybe not…but it’s delicious, the sauces and seasoning pack it full of flavour. When you are drunk you want to eat something that goes POW.
Our first meal in Japan - here’s how you make okonomiyaki.
You order the batter and ingredients, and it is brought to you in a bowl. Turn on the hotplate on the table so that it can heat up. Thoroughly mix up and combine the raw ingredients in the bowl. 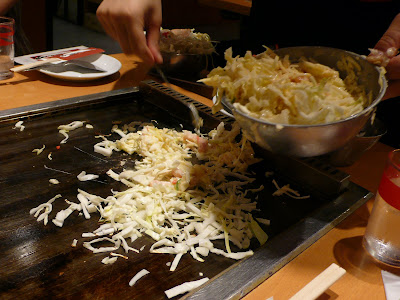 Brush the surface of the hotplate with oil and pour the mixture of ingredients onto the hotplate. Shape into a circle. 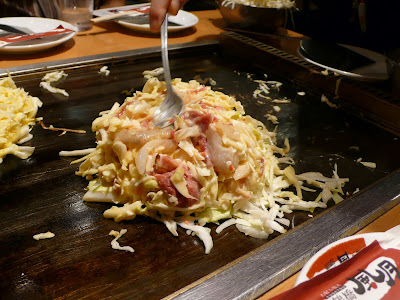 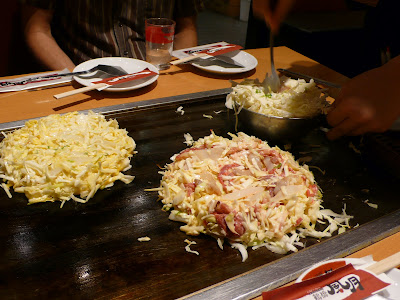 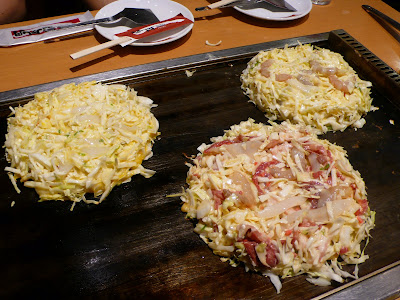 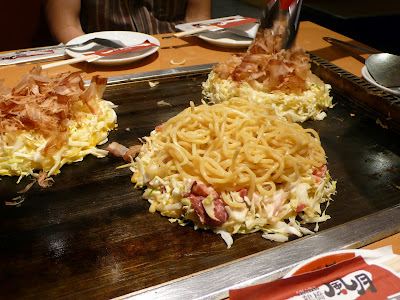 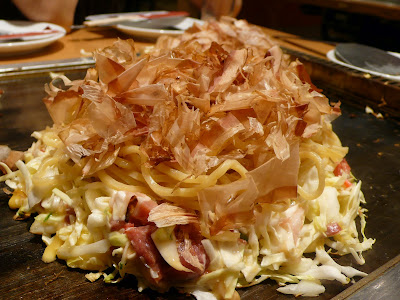 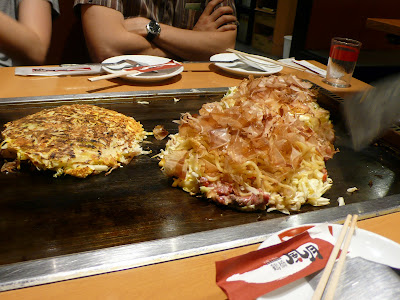 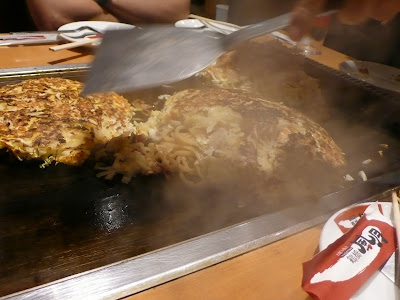 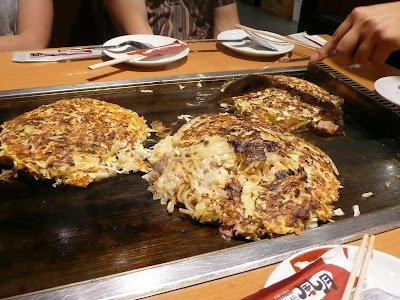 I consumed the biggest Japanese savoury pancake (the one on the bottom-middle) on the table and it was a little hard to flip over.
Once the pancake has cooked though - add mayonnaise sauce and a generous amount of otafuku/okonomiyaki sauce, and sprinkle some aonori (dried seaweed flakes) on top. 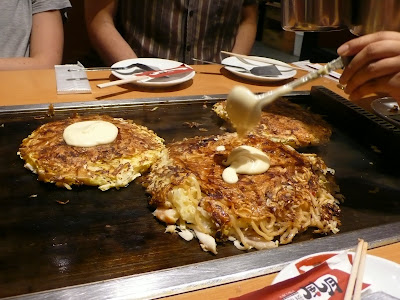 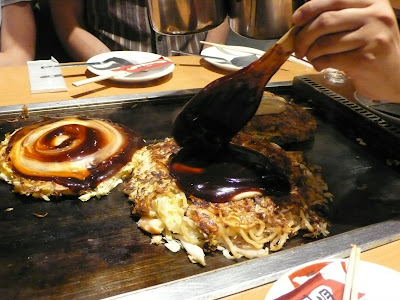 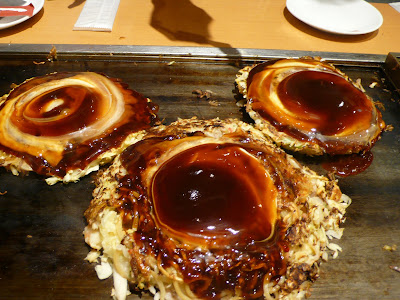 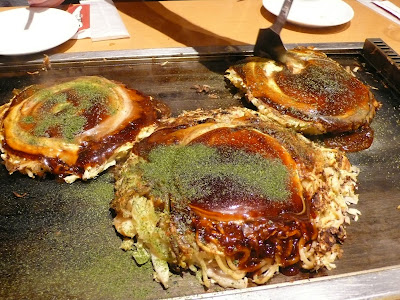 Eat immediately. Small metal spatulas are used to break off pieces of the okonomiyaki and because the okonomiyaki is left on the hotplate while you eat it, it keeps nice and hot! 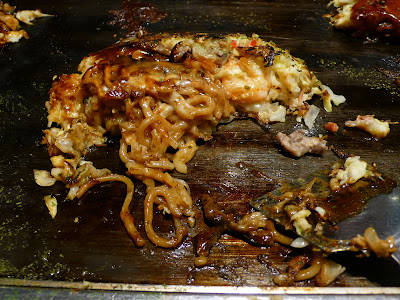 Posted by Blue Apocalypse at 10:35 AM