Kitchen Confidential – Being a chef, daughter of a chef…waiting 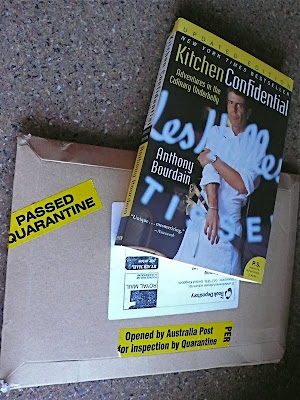 When Kitchen Confidential arrived in the mail from the Book Depository I was surprised to find that it had been quarantine tested. My friends thought the Australian Quarantine and Inspection Service (ASIC) suspected that there was food in the package and Australia has quite strict quarantine measures for food products. But after reading the book, I think that ASIC may have suspected that the book was laced with cocaine.
I really enjoyed reading Kitchen Confidential. It’s a best-selling book, renowned for its behind the scene look at working in a restaurant kitchen. The moral of the story was that cooking professionally is hard work. My dad is a chef so I already knew what being a chef was really like but reading someone else’s story somehow reaffirmed to me even more how hard being a chef is and made me appreciate even more the work that my dad does.
Being a chef is strenuous work that is repetitious, it entails long hours over the heat of a stove, mountains of prep, bringing order to the chaos that is the kitchen, battle wounds from burns/chopping/bumping into things and other people, trying to achieve a 100% strike rate for all the dishes served…..you are required to give yourself entirely to the establishment (my dad can never take a sick day off work because the restaurant wouldn’t be able to function without him) and you don’t always make a lot of money.
As David Chang stated in an interview earlier this year

"There's the common misconception that restaurants make a lot of money. It's not true. If you look at maybe the top chef in the world, or at least monetarily, it's like Wolfgang Puck, but he makes as much money as an average crappy investment banker."

I always remember the changing point in Michael Rulhman’s book The Making of a Chef, the day that made him want to prove himself as a ‘real’ cook. In the chapter ‘The Storm’, there was a blizzard so Michael couldn’t make the last day of the Skills One class so he calls the instructor Chef Pardus to tell him that he can’t make it and Pardus pretty much tells Michael that he is a wimp.

“Part of what we’re training students to be here is chefs – and when chefs have to be somewhere, they get there…Chefs are people who are working on Thanksgiving and Christmas when everyone else is partying…or at home with their family”

My dad works long hours and growing up I never saw much of my dad. I would be in bed by the time he got home from work and he would be sleeping when I got up for school, and at work when I got home from school. I rarely had the opportunity to celebrate with my dad his birthday or Father’s Day on the actual day as he would always be working. My dad has breakfast but eats lunch after 2.30pm when the lunch service finishes and then has dinner after 10:30pm at night when the restaurant has finished for the day. Even if my dad is hungry, he never has the time to eat within service, there is always a constant flow of orders coming in and dishes that need to be cooked and out of service there is prep to do for the next service.
...sometimes he doesn’t even have time to feed his own children…
After many years of working in various restaurants, starting out washing dishes and then moving to kitchen hand duties, and then working his way up to being a cook and owning a small lunch bar for a short period of time, my dad finally opened up his very own restaurant about 2 years ago.
This is every chef’s dream, if you are working so many insane hours then you would want to be working for yourself. 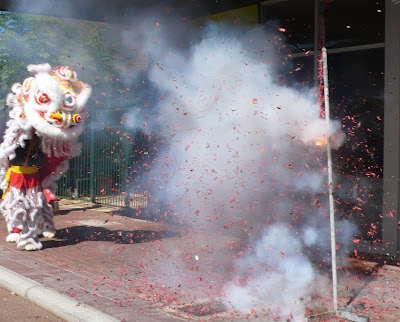 (opening of my dad's restaurant with traditional dragon dancing)
The opening night was a very exciting time for my family. It’s like everything that my dad has done in his life had been building up to this point and it was a very proud moment.
On the opening night, I drove my younger brother and sister to the restaurant. When we walked in it was really busy which was a good sign. Mum had reserved for us the best table, a little booth at the back and we seated ourselves pouring over the large menu deciding on what to order. We placed our order and then waited, and waited. Our dad came out at some point to greet us but only very quickly as he needed to be in the kitchen. We waited some more…two hours later and still waiting.
It was pretty chaotic in the kitchen as it was the first night and everyone was still trying to get into the groove of things. A system for handling the flow of the tickets to cooking and dishing up had not been established. Other people were also waiting, sometimes over an hour for their meals. The teething issue that restaurants face when they first open is not a joke.
Mum was helping out in the kitchen and would come out now and then and say to us kids, your order is coming up next….yes, next, after that order that you placed in front of it. For every order that came in, ours would be moved back down the line because it was important to serve the customers first and get them out of the way.  We were family, we understood how important it was for our parents that night to satisfy all the customers that dined as much as they could and it was our duty to take a hit for the team.
After about two hours of waiting my mum confronted her three now starving children. The solution was to put $50 into my hand and tell me to take my brother and sister across the road to get some food. This was the only way that we would get fed that night.
At the restaurant across the road, we were the only customers. It was completely empty. It’s thunder and customers taken away by the opening of my dad’s restaurant, and business would continually be taken away. It’s funny though, what would the owner have thought if he knew that the only people eating at his restaurant that night were the children of the owner across the road…
After eating we went back to my dad’s restaurant and things were still quite busy. We said goodbye to our parents and headed home. We were all a little disappointed that we couldn’t eat at our dad’s restaurant that night. We had watched it being built, all the family had been at the restaurant a week before to give it a christening which involved enjoying a whole roasted suckling pig. But I was never mad because I knew how hard my dad was working, he would have been even more disappointed than us for not being able to feed his own children that night. 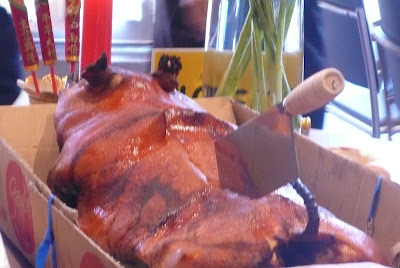 (christening the restaurant with a whole roasted suckling pig!)
For people who complain about service, think about the service that you get at times over the chef’s family members when you dine and how chefs spend their birthday, Father’s day, Christmases and New Years serving you rather than spending time with their family. 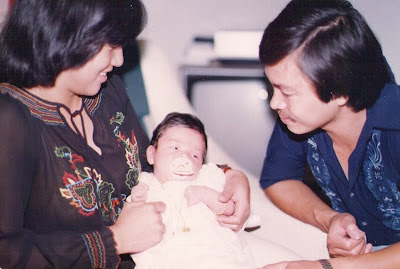 Spending some quality time with my parents (L-R mum, me and dad)
Posted by Blue Apocalypse at 2:38 PM