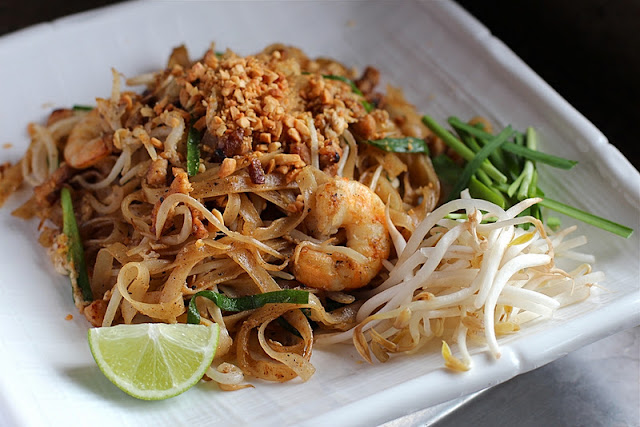 Every country has a national dish that it’s famous for and is found everywhere. Pad Thai is a dish you will often see listed as the top Thai dish, sometimes it’s a toss up between Tom Yam soup and Pad Thai, but I think that Pad Thai is more representative of Thai cuisine as it’s the ultimate street food and you will often find food carts in Thailand cooking it fresh on the streets. 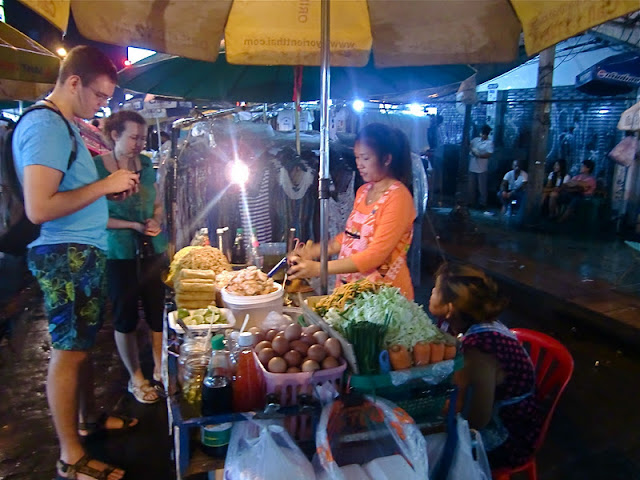 (Photo I took of a street cart selling Pad Thai in Bangkok)
When I traveled to Bangkok in September, I had Pad Thai almost every day. It was everywhere, so it was hard to avoid eating. I’ve always enjoyed eating Pad Thai and it’s a dish that I would often order at home in Perth, so while I was in Bangkok I was interested in trying Pad Thai as often as possible to see how it was cooked, and explore its taste and the ingredients used to cook it.
Ever since coming back from Bangkok I wanted to recreate the Pad Thai that I had there. I consulted my Thai bible aka David Thompson’s Thai Food and my favourite Thai food blogs Chez Pim and She Simmers.
From my research, I learnt that the three key elements for a successful Pad Thai are: 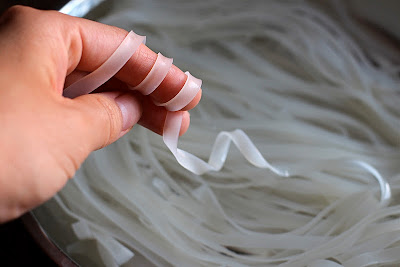 Swirl around the finger test for soaking dried rice noodles
Here’s my rendition of Pad Thai, I’m pretty happy with the result. 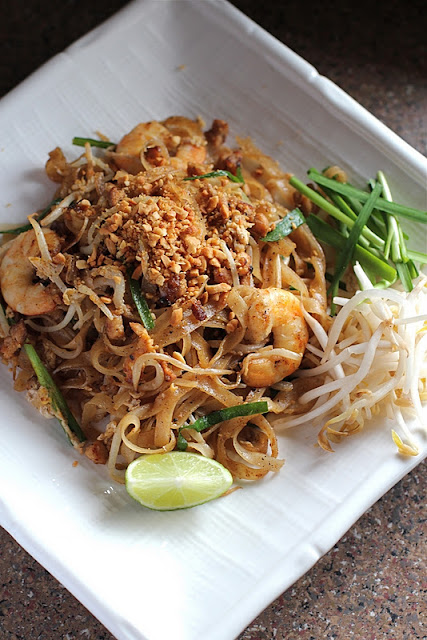 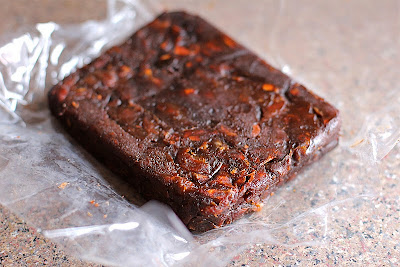 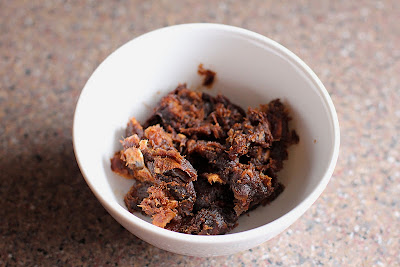 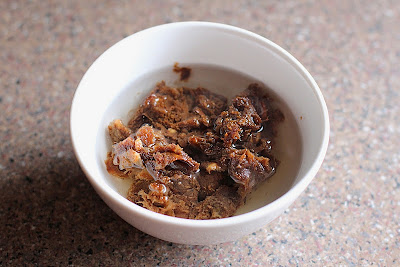 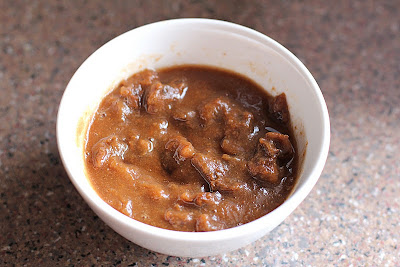 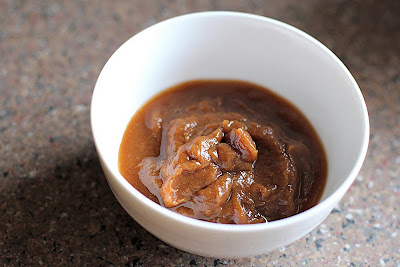 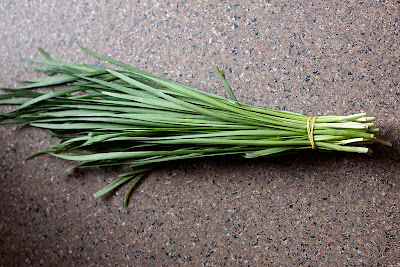 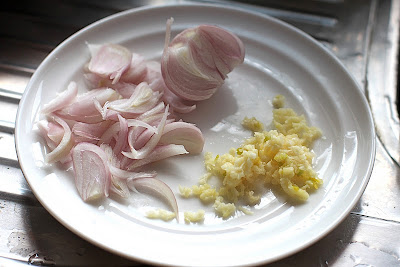 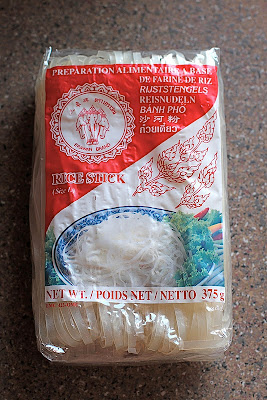 This was the packet of dried rice noodles that I used, available from most Asian supermarkets. How did I know that it would be the right one to use? Well the back of the packet said that it was a product of Thailand and that was good enough for me. 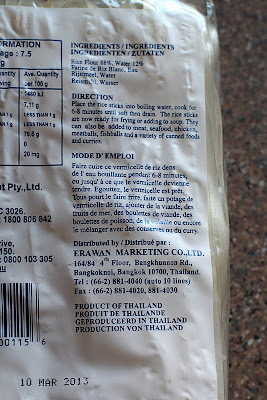 Method
(Reference: David Thompson’s Thai Food, Chez Pim and She Simmers)
Soak the dried rice noodles in room temperature water for 30-45 minutes until it softens and is pliable. Drain well. 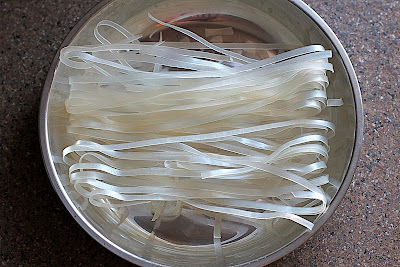 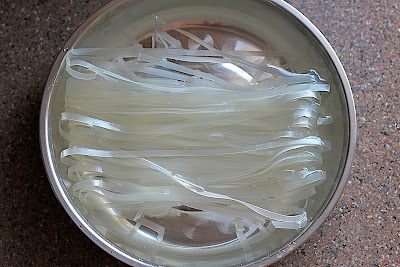 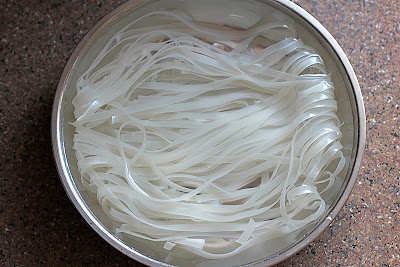 Prepare the sauce – simmer the palm sugar, white sugar, tamarind pulp and fish sauce for 1-2 minutes until dissolved. Taste and adjust the flavour balance until it suits you. 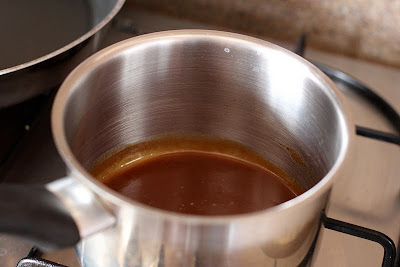 Note: It’s best to make one serving at a time!
Heat up frying pan and add in some peanut oil (add in more oil throughout the cooking process as necessary, ie: when things start to stick to the pan). Add in the minced chicken, fry until halfway done then add in 1-2 teaspoons of sauce to flavour the chicken. 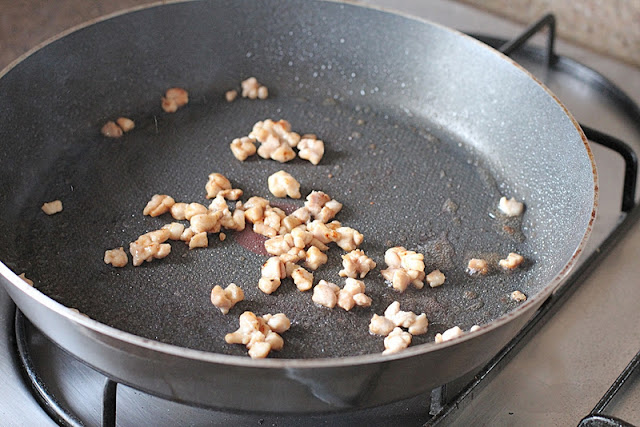 Add in the rice noodles, 2-3 tablespoons of sauce and fry rigorously, stirring everything around (the amount of sauce added to the Pad Thai can be adjusted according to how strong a flavour you like). Add in some water, a tablespoon at a time, if the sauce evaporates too quickly and/or the noodles get dry and haven’t cooked through yet. Keep the noodles moving around constantly to keep from burning or forming a crust. Cook until the noodles are soft. 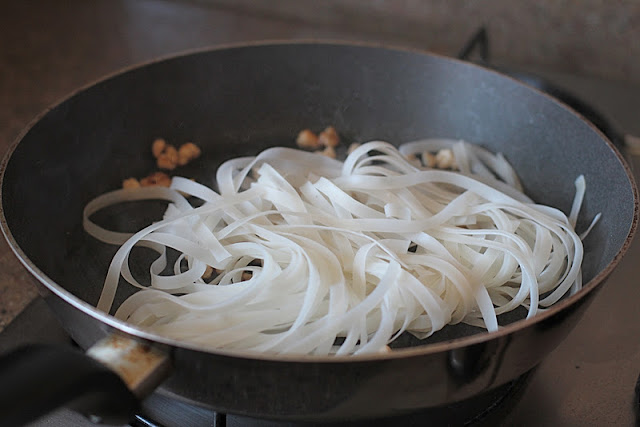 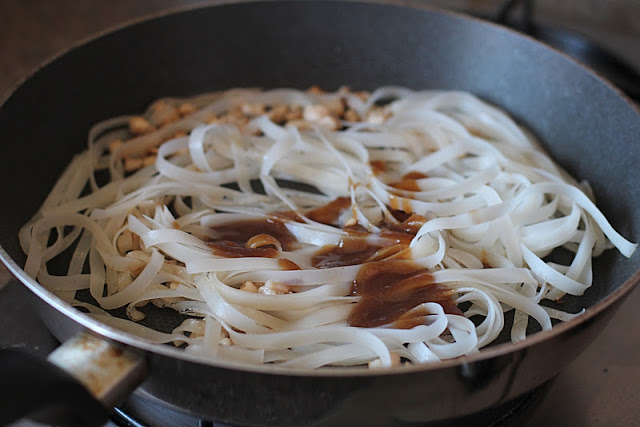 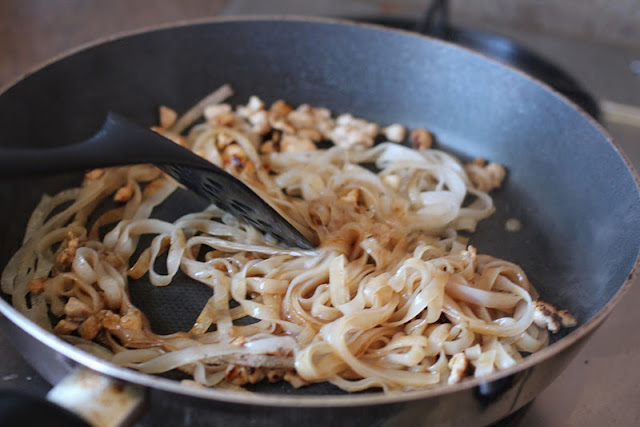 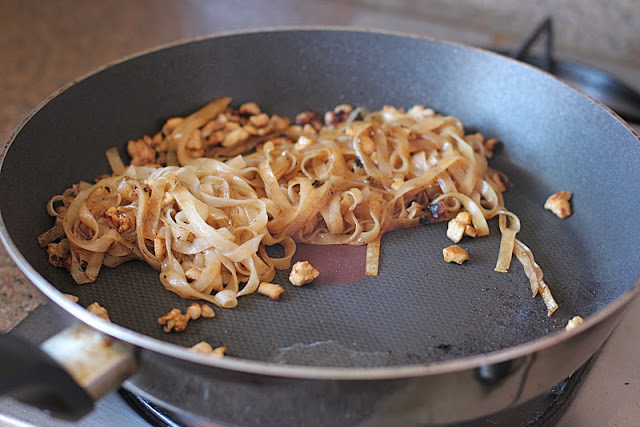 When the noodles are ready (pull out a strand to taste), push the noodles to one side of the pan and add in the prawns, shallots and garlic, and cook until the prawns are nearly done. Then add in the bean sprouts and garlic chives, and quickly toss everything together. Taste and check the seasoning, add more sauce if necessary and a pinch of chilli powder if more heat is desired. Create some space in the middle of the frying pan and crack in the egg, let it sit for 10-15 seconds and then fry everything together. 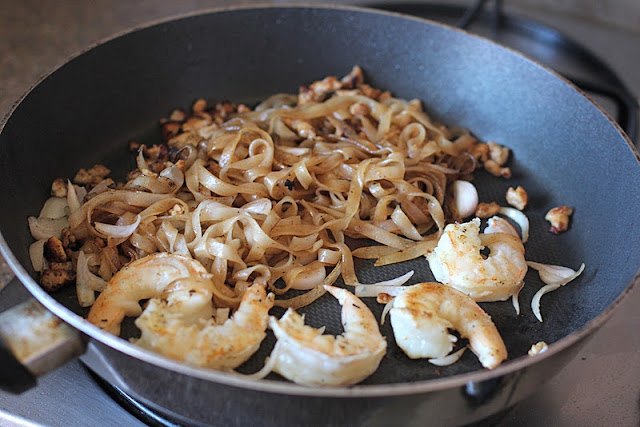 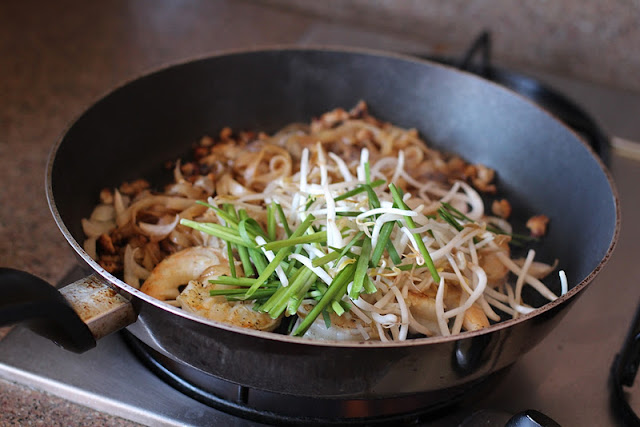 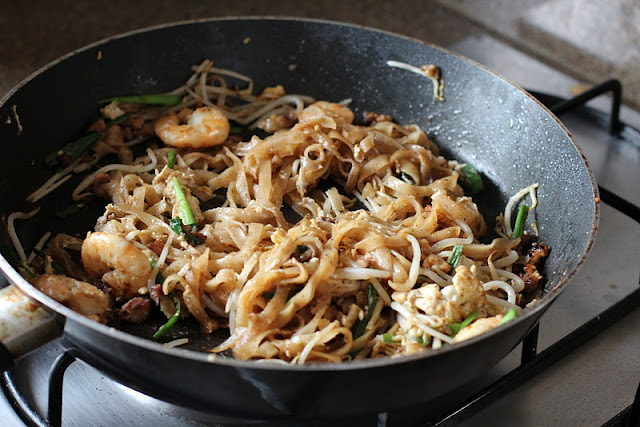 Serve the Pad Thai on a plate with crushed roasted peanuts, wedge of lime and some extra bean sprouts and garlic chives.
Wipe down the pan and then make another serve. 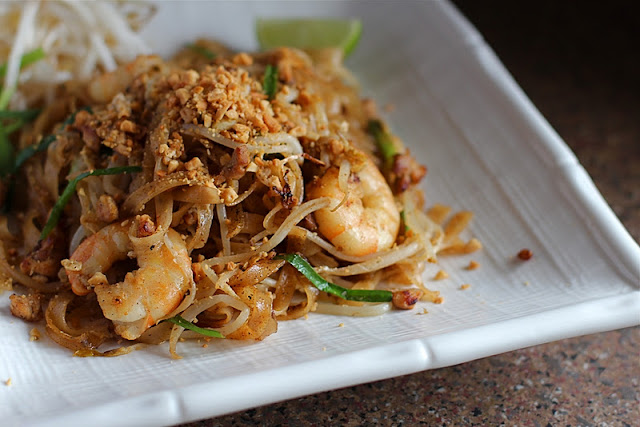 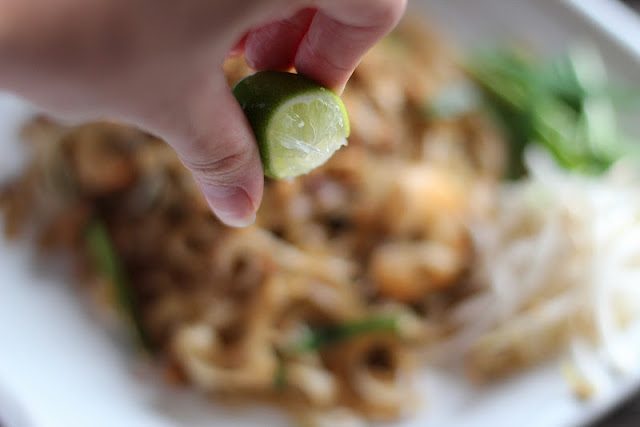 Posted by Blue Apocalypse at 10:51 AM