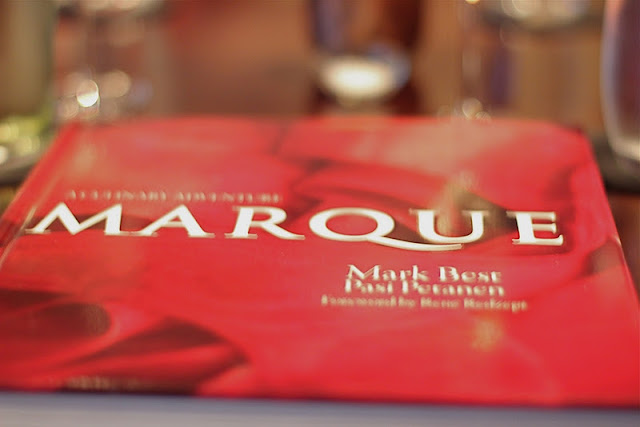 Mark Best’s restaurant in Sydney, Marque, was awarded 2012 Gourmet Traveller Restaurant of the Year and he recently published a cookbook Marque: A culinary Journey. To launch the cookbook in Perth, Mark Best and his head chef Pasi Petanen came over and cooked a special degustation at Restaurant Amuse. The opportunity to eat dinner cooked by undoubtedly one of the best chefs in Australia and consume signature Marque dishes without having to travel to Sydney was too good to pass up.

On Thursday, 8 December I found myself at Restaurant Amuse for the third time this year with fellow dining partners in food crimes Linda, David and Chris to experience what would be the best meal that I have had this year.

Degustation means a careful, appreciative tasting of various foods. A degustation is much more than just tasting an array of small dishes served one after the other, together with matched wines, in the one sitting. A degustation is an experience and takes your pallet on a journey. At a degustation I am always introduced to interesting creations and new flavour combinations. The dishes served should have a natural progression and flow on from one another, building on different tastes. A degustation in a lot of ways is like a symphony, it needs to be well orchestrated, with every dish working together to create a beautiful harmony. The degustation provided by Mark Best was the finest symphony that I have experienced, everything was beautifully and tastefully executed.

The evening started with some hors d’oeuvres. First up was Beetroot Macaroon with Foie Gras. They looked like macarons, two little meringue like shells encompassing custard made of foie gras. We thought that there was a misspelling on the menu – shouldn’t it be called macaron not macaroon? In the book Marque: A culinary Journey, it states that the word macaroon is used to put the diner off guard. You think that you will be biting into a crisp meringue shell with a soft interior, but instead, when you put this little morsel into your mouth, the texture is so light that it’s what I imagine biting into a cloud would be like if it was edible. Next was Pacific Oyster with Grilled Sea Foam. You have to pop the oyster and foam into your mouth all at once for the marriage of texture and flavour to take full effect, and when you do, the feeling of the sea fills your senses. 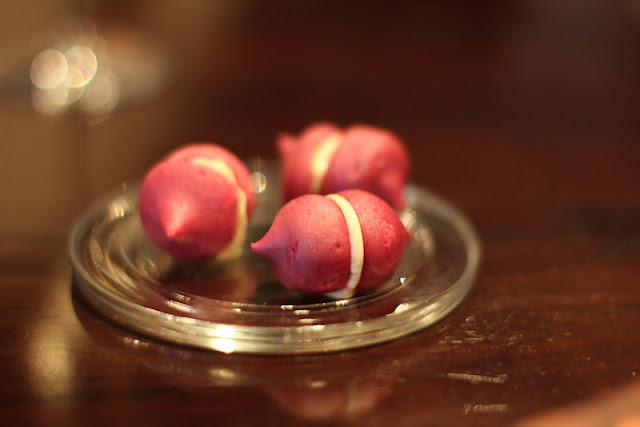 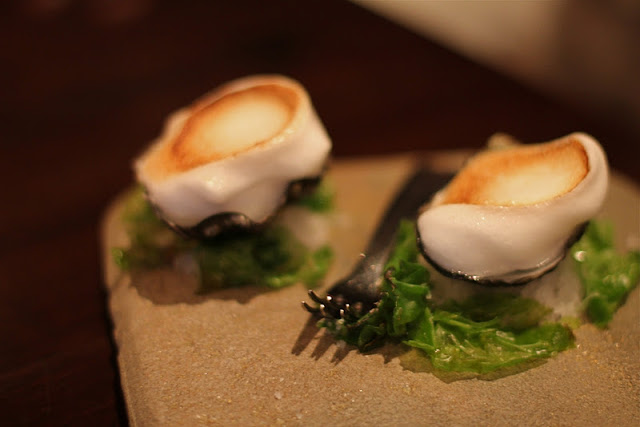 Then discussions ensued over whether or not to take the matched wine option or to (be responsible because it’s a school night and work beckons the next day) order just a few glasses. Linda and I went with the matched wine option. I always go for the matched wine option with a degustation. I am not much of a wine connoisseur but I appreciate how wine complements and enhances the food you eat, and with a degustation, the wine matches have been even more carefully considered so that like the dishes served, the wines flow on from one another and don’t overwhelm the palate. The sommelier at Restaurant Amuse is Kim, I love her enthusiasm, the way she described each wine before she pours it into our glasses made me excited to try it. Each course was expertly and thoughtfully matched with a wine to fit in with the elements presented on Mark Best’s dishes. 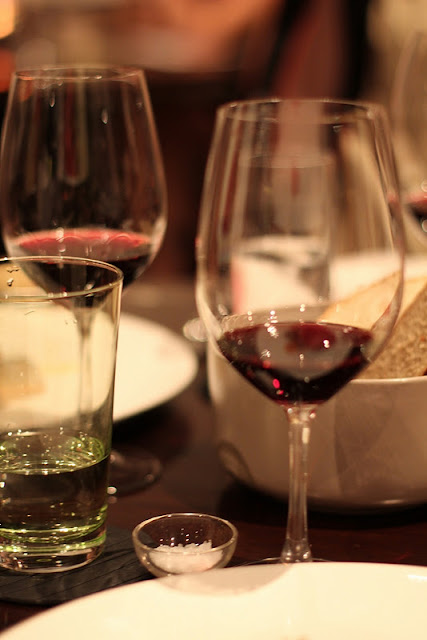 The first course was Almond Jelly with Blue Swimmer Crab, Almond Gazpacho, Sweet Corn & Avruga paired with A. Christmann, 2009 Riesling, Pfalz Germany. We were presented with a plate that had a little snowy almond mountain, we dig into the mound to find the lovely meat of the blue swimmer crab with its natural sweetness lifted by the almond and sweet corn. For the second course, we were presented with Scallops with White Asparagus, Yoghurt Whey & Togarashi paired wth Prager, 2009 ‘Hinter Der Burg’ Federspiel Grüner Veltliner, Wachau Austria. The scallops were ceviche style with thinly julienned white asparagus to provide texture and the togarashi (Japanese spice mix) scattered on top provided little pops of flavour. I loved the interplay of flavours and textures in this dish. 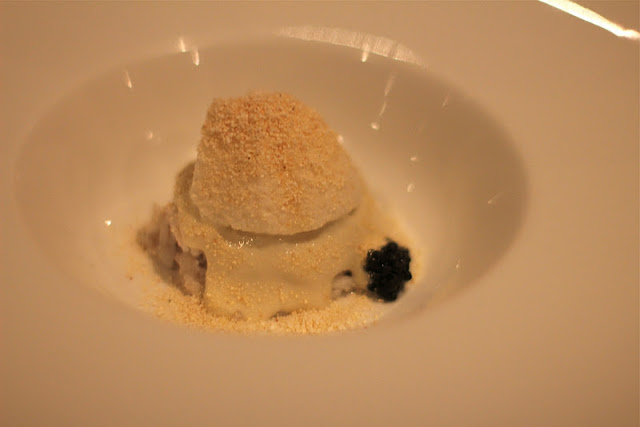 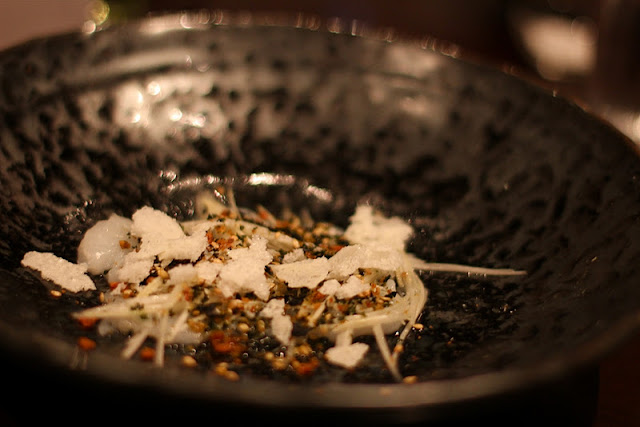 The third course of Dutch Cream Potato with Bone Marrow, Sea Urchin & Coffee paired with Josmeyer, 2008 ‘Le Fromenteau’ Pinot Gris, Alsace France was undisputedly the dish of the night for all. The Dutch potatoes were specially smuggled in for the occasion. It was an interesting but cohesive combination. The coffee being the most surprising element, which was lightly sprinkled over the top, it was like icing on a cake. One spoonful and everyone around the table released sounds of contentment. It was truly an exquisite dish. As everyone finished and little scrapings on the plate were left, we were left wanting to lick the plate clean in order to savour every last bit of the dish. Thankfully the bread came out at this point in time and we prevented the waitresses from collecting our plates so that we could use the bread to wipe up whatever was left. 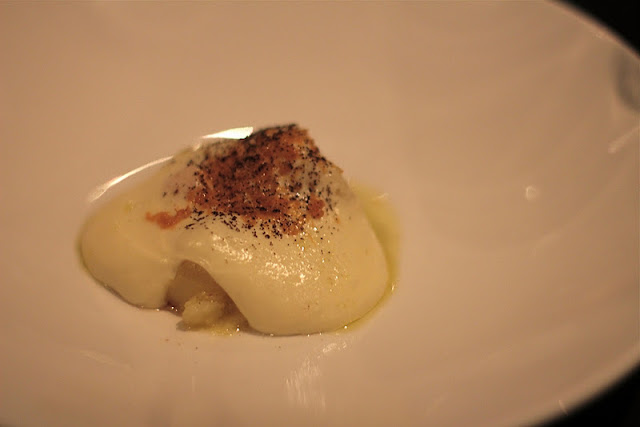 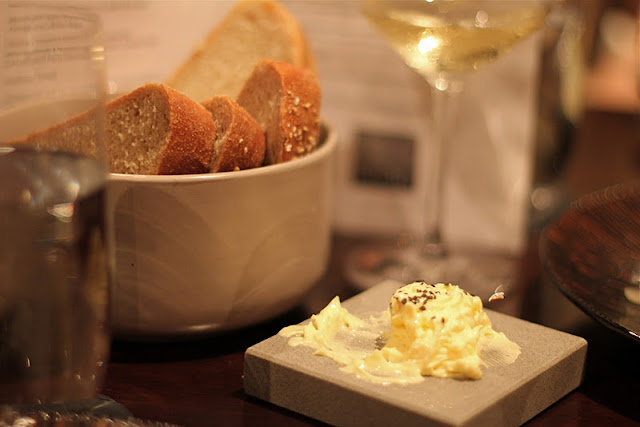 The bread was accompanied with creamed butter and volcanic salt.

The fourth course was Bar Cod with Polenta, Buddha’s Hands, Witlof & Vadouvan paired with Man O’ War, 2009 ‘Valhalla’ Chardonnay, Waiheke Island New Zealand. I don't think that I have ever consumed fish that has been cooked so well, the bar cod was a delight to eat, I could have eaten it on it’s own with nothing else. The outside was lightly seared and the flesh was so soft that you could cut through it like butter. A teaspoon sized amount of polenta and buddha’s hand accompanied the fish on either side of the plate, providing contrasting flavours to go with the fish. This was the first time that I had eaten buddha’s hand which is a fruit that is fragrant with a citrusy taste. The fifth course was Glenloth Pigeon and Duck Liver with Green Strawberries, Beer & Fennel paired with Chimay, 2011, Baileux Belgium. This dish to me was about the pleasure of eating well cooked game meat. On one side you had pigeon and on the other side you had the duck liver, both cooked perfectly and served with some green strawberries which provided a pleasant tartness, accented with a spike of beer and fennel. 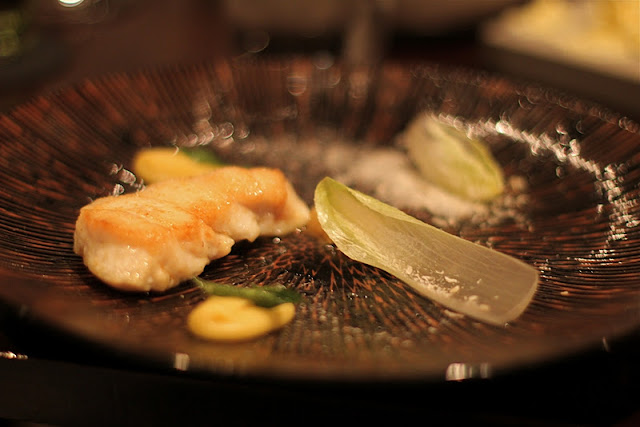 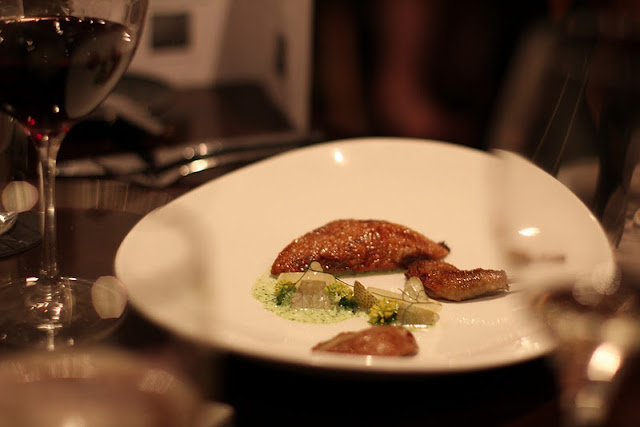 The sixth course was Blackmore Grain Fed Wagyu with Beef Tendon, Wasabi & Fermented Vegetables paired with Le Fonti, 2006 Riserva Chianti Classico, Tuscany Italy. Compared to the other dishes we had consumed throughout the night, some felt that this dish didn’t have the wow factor that the other dishes did, but I liked the simplicity of this dish with its subtle flavours and vibrant colours. The beef was the star presented in its purest form teamed with delicately fermented vegetables where the wasabi felt almost not present. 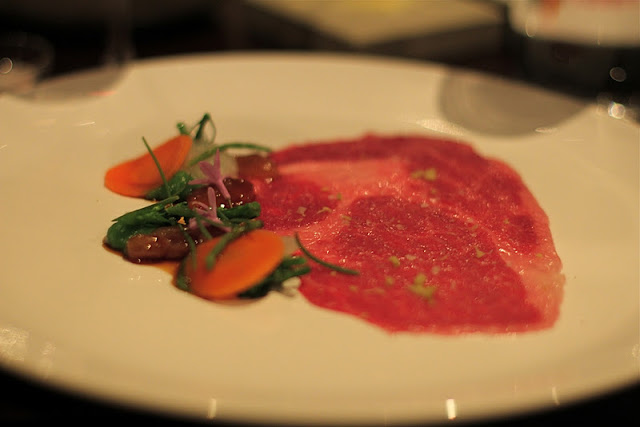 Next was the famous Marque egg dish. The Sauternes Custard. This has been served as a pre-dessert since Marque began. It’s a delicate and rich tasting custard. The final dessert dish was “Tomberries” with Chocolate Jelly & Crème Fraiche paired with ‘The Portberries’. The tomberries are baby tomatoes cooked in a strawberry syrup creating an art of deception as you try to figure out what you are eating. I liked how this dessert wasn’t overly sweet but still hit the sweet spot. 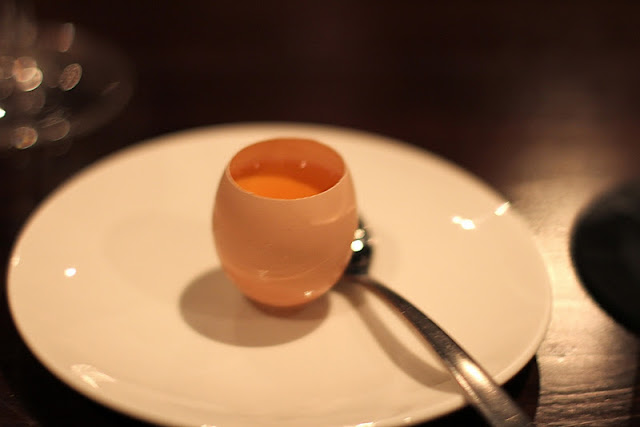 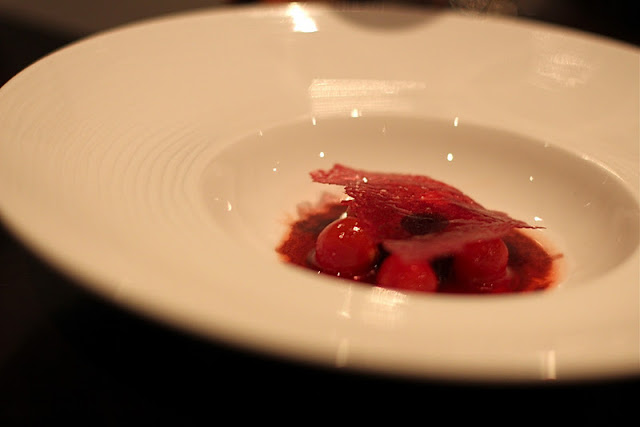 The night ended with petit fours of Salted Caramel Chocolates, Lemon Drops & Bitter Bon Bons. I was very impressed with the bursts of flavour that came through the petit fours. One thing that I found throughout the night with every dish that I ate was that I could never fully predict what was ahead of me, the tastes I assumed that I would be confronted with was always taken to another level. The petit fours were no exception. I had the lemon drop first and it felt like I had bitten into an actual lemon as the sourness of the lemon came through prominently but the white chocolate coating was a saving grace tempering the acidity. My personal favourites were the bitter bon bons, they are like fruits jubes. I love fruit jubes and these were the best jubes that I have ever eaten in terms of taste and texture. 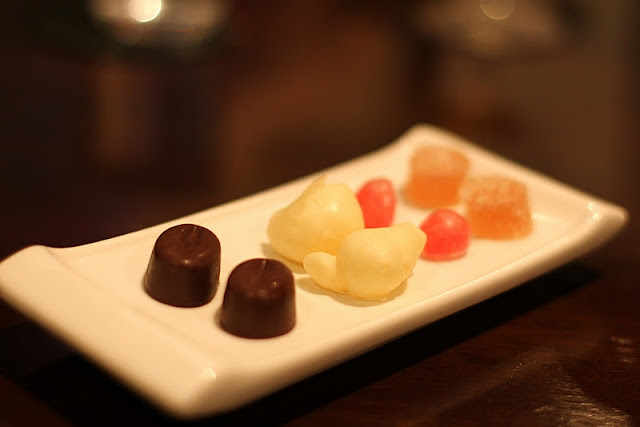 In the middle of service, Mark gave a little speech and then he spent the rest of the night making the rounds to each table and having a chat with all the diners. Mark not only shows an appreciation of how to use ingredients and techniques to provide a mesmerising dining experience but also an appreciation of the consumers of it.

The service that the Restaurant Amuse staff provided throughout the night was impeccable. Having been to Amuse a few times, the staff remembered us and made us feel right at home. This was one of the most memorable dining experiences that I have had. This event also provided an opportunity for the Restaurant Amuse staff to work with Mark Best and Pasi Petamen, and for both sides to learn from each other and share knowledge. When Carolynne, manager of Restaurant Amuse, was asked how were the staff coping with having to learn to cook a whole new menu amongst running the usual Amuse degustation, Carolynne told us that this was like a holiday because it had been a lot of fun.

The collaborative effort of the chefs from Restaurant Amuse and Marque put on a really special event with amazing food. I hope that in the future there will be more events like this.

Posted by Blue Apocalypse at 10:57 AM