How to make a Swiss Roll 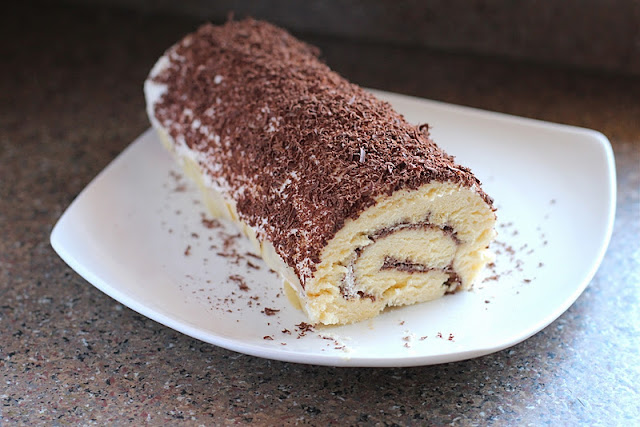 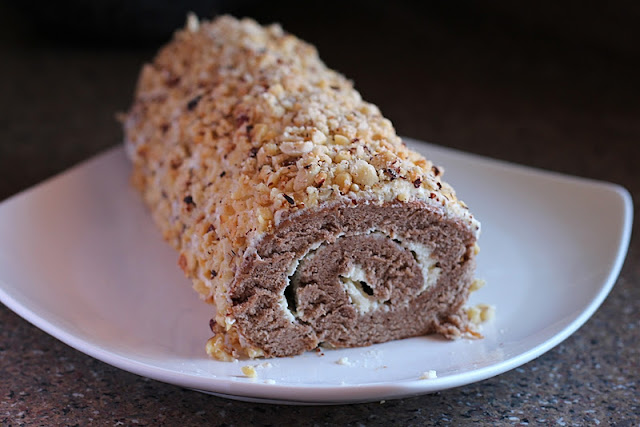 A swiss roll is a type of sponge cake roll. It is also called a roulade by the French and a jelly roll by Americans. A swiss roll is what the English call it and it looks like Australia has adopted the English way as I have always know this cake to be a called a swiss roll.

I ate a lot of supermarket bought swiss rolls as a kid, a slice of it was a lunch box staple for recess (morning tea), usually the ones filled with jam or the lamington roll with cream filling and covered with chocolate and coconut. I love the light, soft and fluffy texture of a sponge cake, and when it sandwiches a delicious filling in a pretty pinwheel design, it's a delight to eat.  What was your lunch box staple for recess? 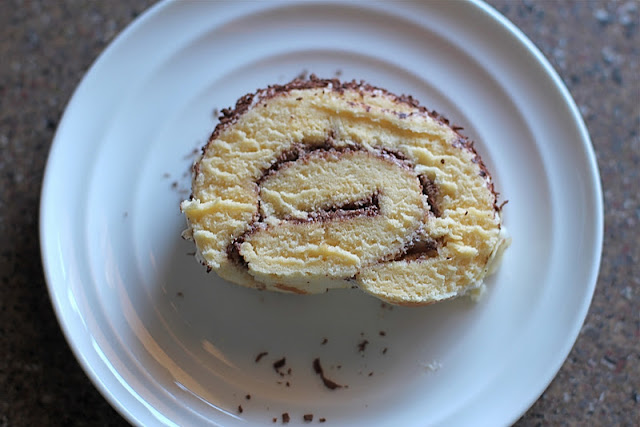 A slice of swiss roll 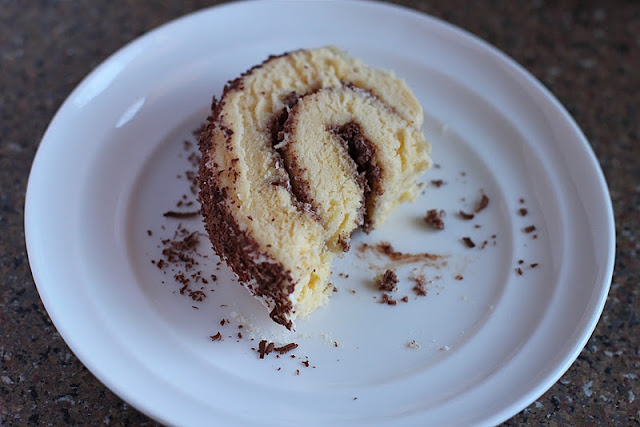 I have been trying to perfect baking a swiss roll and I have tried a few different sponge cake recipes to see which one would provide the best base. I found that the basic sponge cake recipe on the Master Chef website which was used in an elimination challenge in the third season worked best, but I altered the method after some experimentation. The changes to the method are that I folded the flours into the egg yolk mixture rather than at the end, after folding in the egg white mixture, in order to keep the batter light. I found that folding in the flours at the end after the egg whites knocked a lot of the air out of the batter. I also added in a little cream of tartar to the white eggs while I was beating it to stabilise the peaks. I didn’t add in any melted butter which was specified in the recipe as it was heavy and reduced the volume of the sponge, I had to fold quite a bit to ensure that the butter was incorporated into the batter. The butter is supposed to add to the taste but you fill a swiss roll with cream or jam so the butter isn’t really needed. The key to a sponge cake is to keep the batter as light and airy as possible, so as you mix in the different elements of the sponge, you don’t want to overfold or overbeat it.

My tried and tested recipe for swiss roll, adapted from MasterChef.

In a large bowl, beat yolks for a few seconds until combined and then add in 50g of sugar a tablespoon at a time and continue beating until thick and pale about 5-7 minutes so that when you raise the beaters, the batter will fall back into the bowl in slow ribbons. Add in the vanilla extract at some point during the beating process but only when the egg yolk mixture has thickened a bit. 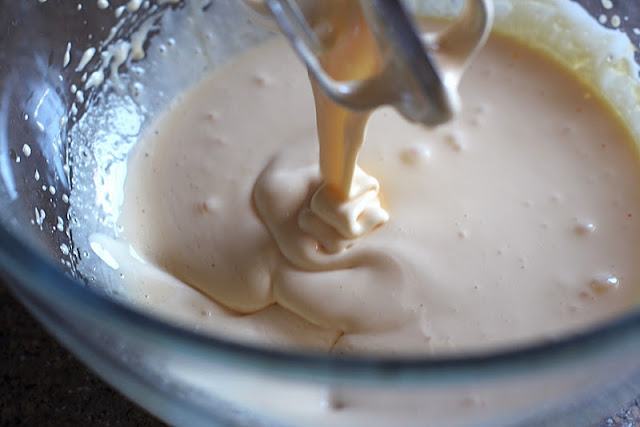 Sieve flours (plus matcha powder or cocoa powder if using) and salt into egg yolk mixture and gently fold to combine. 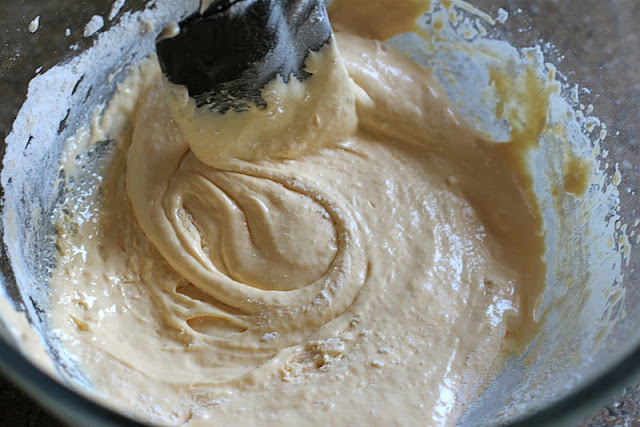 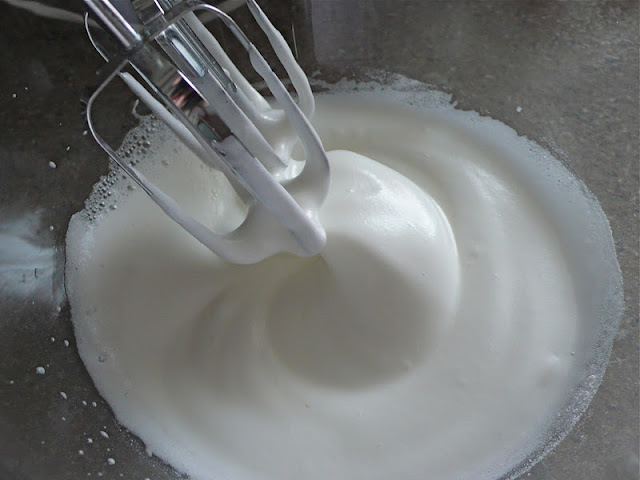 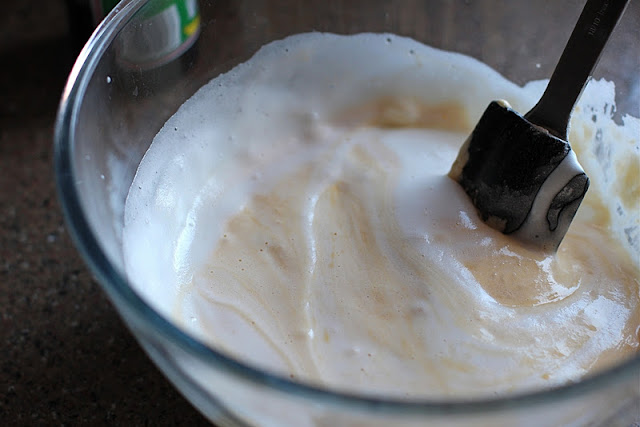 Pour mixture into prepared pan. Bake for 8 - 10 minutes or until light golden, the cake should feel slightly springy to touch (note: the sponge will look a bit bloated when it comes out but will level down). 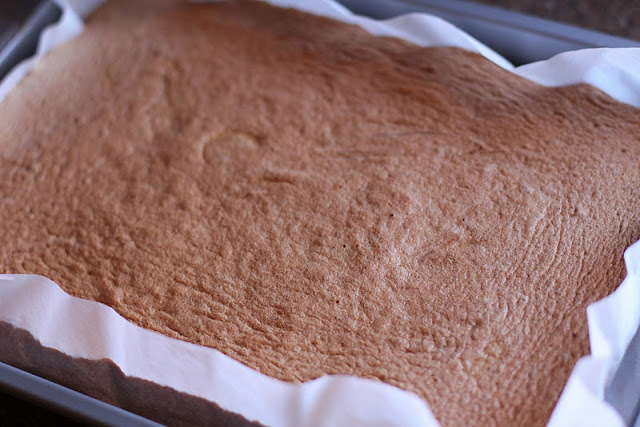 Remove and set aside for 5 minutes to slightly cool. Then turn out the sponge onto a piece of greaseproof paper, peel off the lining paper. Put another piece of greaseproof paper on the other side and roll the sponge up and leave to cool completely. This helps to set the shape of the roll and also helps to prevent cracking. The sponge needs to be rolled while it is still warm and flexible. 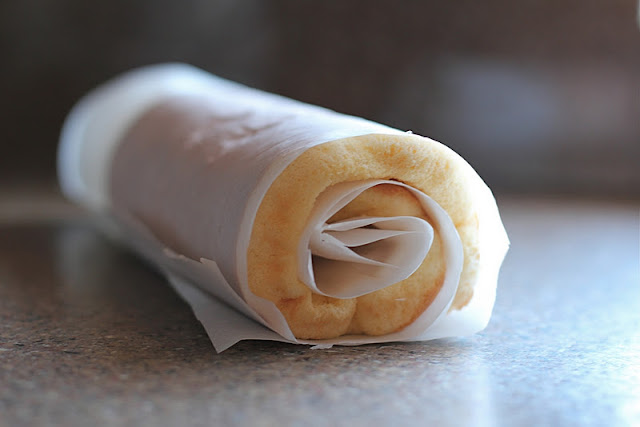 As the sponge roll is cooling, beat the cream until it forms whipped cream. I am always fascinated at how cream turns into whipped cream.

When the sponge has cooled, carefully unroll it and gently remove the inside paper. 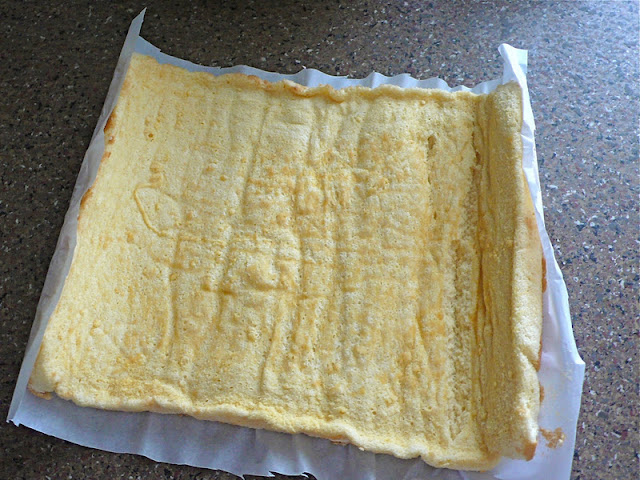 Spread the inside of the sponge with your choice of filling and roll it back up, slowly peeling off the outside paper. Place it seam side down on a plate. 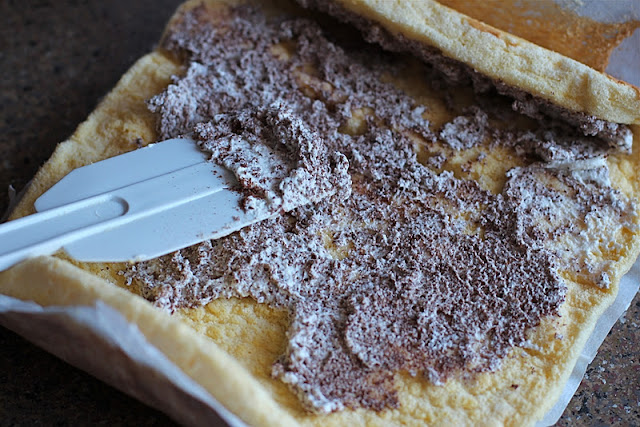 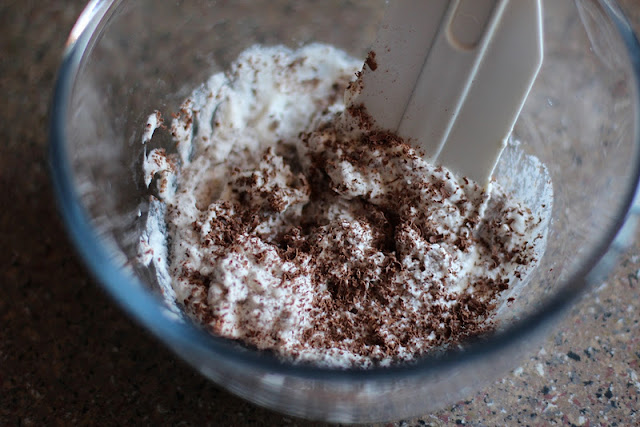 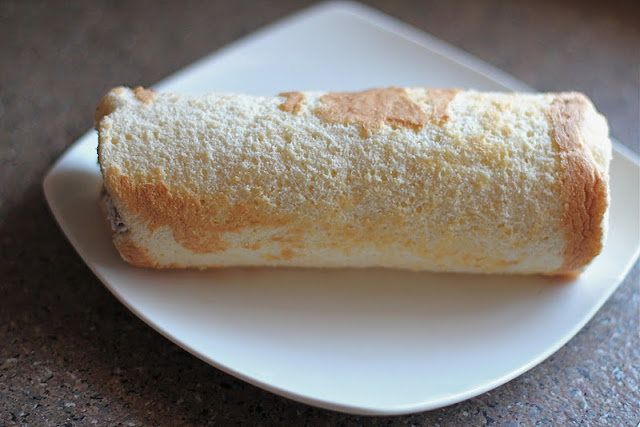 The top of the swiss roll is likely to stick to the greaseproof paper (alternatively, you can roll the sponge in a clean tea towel to prevent peeling), and sometimes you may get cracks in the sponge cake but it’s not a problem because I never leave the swiss roll naked, I always decorate the outside - spread the outside with whipped cream and sprinkle on chocolate gratings or crushed nuts, or just dust with icing sugar. 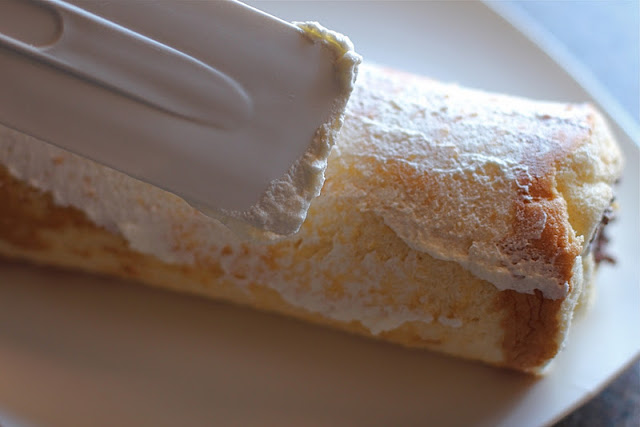 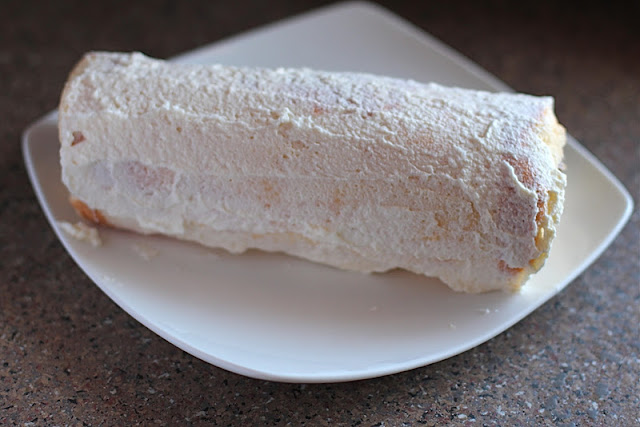 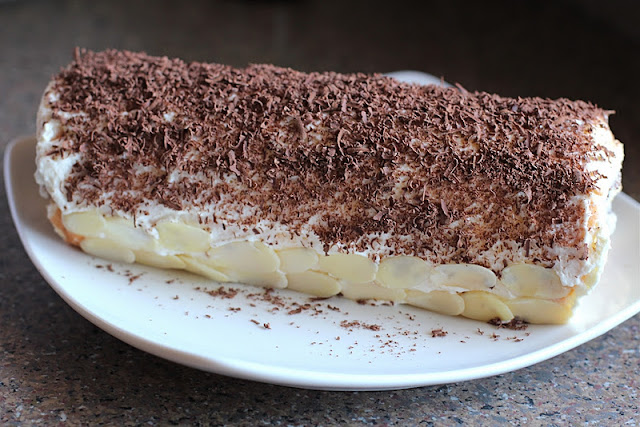 Swiss roll with chocolate shavings and lined down the bottom with almond flakes. 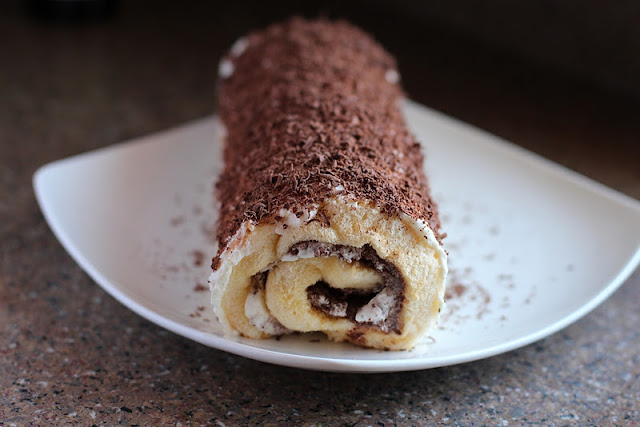 The assembled swiss roll can be eaten straight away but it tastes better if you refrigerate the swiss roll for a few hours or overnight before eating it. Refrigerating sets the sponge and cream together, and it will also slice more neatly. 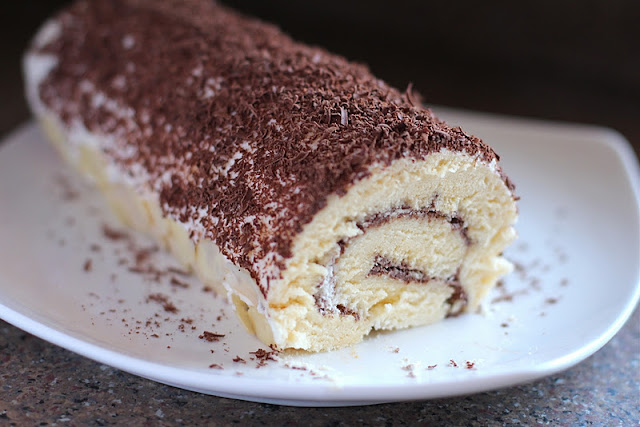 Posted by Blue Apocalypse at 1:08 PM