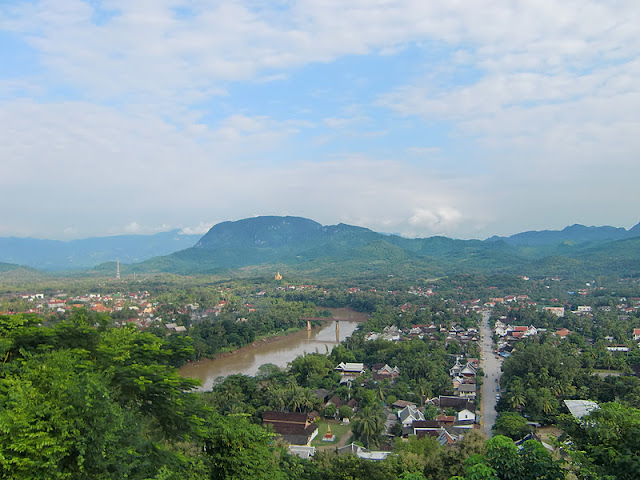 After spending much of our time recovering from food poisoning in Ayutthaya, we were really looking forward to the next destination on our trip – Luang Prabang. We had friends who had travelled to Luang Prabang about 4 years ago and we were promised some sort of untouched paradise, the least developed of all the South East Asia places you could visit.
But we were a little disappointed with our first impressions of Luang Prabang. It was very apparent that it was becoming a tourist city. There has been much development with guesthouses popping up everywhere, tourist agencies, shops selling local handicrafts at tourist prices, cafes and bars catered to Westerners (we even came across an Aussie sports bar which showed the footy finals!). At every corner there was a tuk tuk driver offering “waterfall…waterfall…I take you to waterfall?” The US dollar is commonly used in place of the local currency which is the Lao kip. 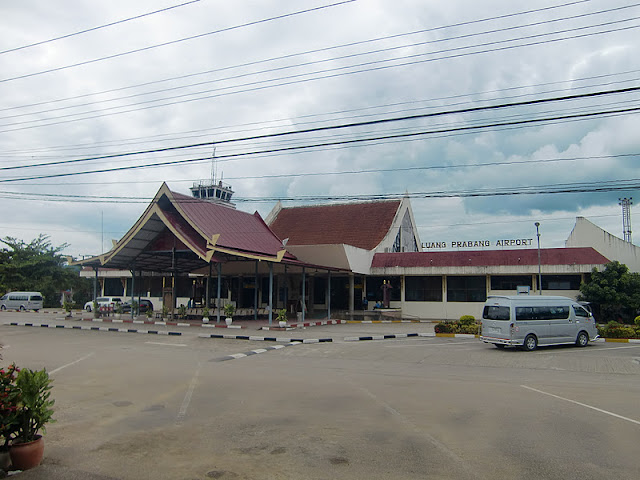 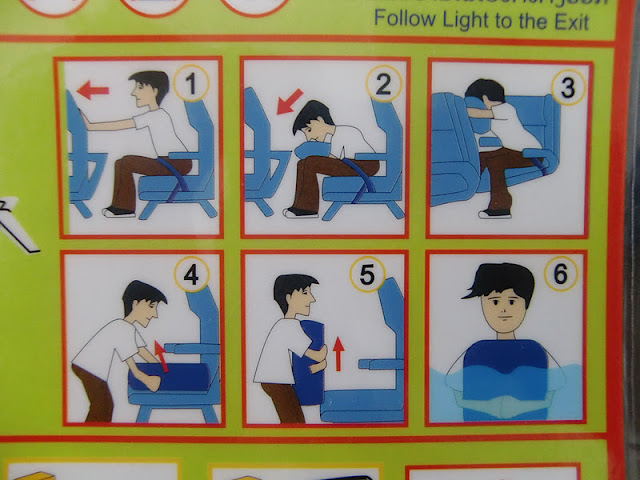 This is what the current Luang Prabang airport looks like. It’s tiny! Their planes (Lao Airlines) are also small and their equivalent of a life jacket is your seat. But all this is about to change…our guesthouse owner told us that Luang Prabang was building a new airport and will soon be able to accept flights directly from Singapore (currently you can get to Luang Prabang via Thailand or Vietnam).
I still enjoyed my time in Luang Prabang but it took a little bit of time to accept the reality of the situation. Luang Prabang still has a certain charm to it - it’s a place where you can ride around freely on a bicycle on uncongested roads, you will see the local Lao kids running around and playing in the street, and nestled between the Mekong and Khan rivers, it is extremely picturesque. 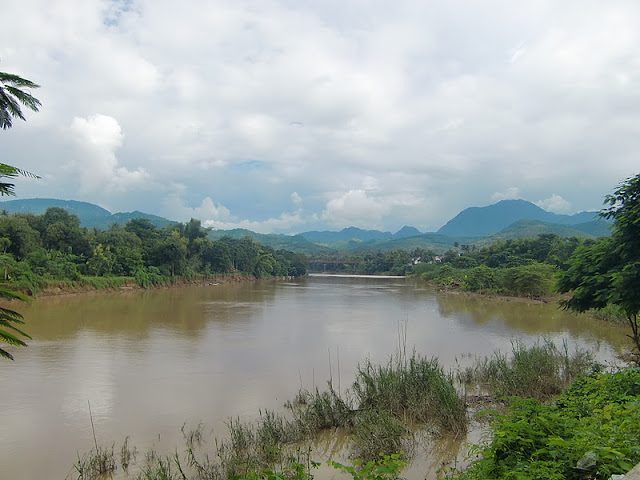 Your firsts of anything is always a significant affair – your first day at school, first time you ride a bike, first date, first kiss, first time you get drunk, first time you win an award for anything. When you are travelling, you experience many firsts – your first tuk tuk ride, your first attempt to cross the road in unregulated traffic, your first squat toilet, your first go at haggling with a street vendor…I think that one of the most important firsts is your first meal at a place. Seems like a typical response coming from a food blogger right? But after arriving at your destination, all that travelling, walking, sweating, overcoming communication barriers, finding the right hotel, checking in etc. – you are going to be damn hungry and at a point where you are not too fussed about what you eat as you have days ahead to explore the food. But you know what they say about first impressions, so finding a relatively decent first meal is important and some sort of achievement.
As far as first meals go, the first thing that I ate at Luang Prabang was probably my favourite first meal. We walked along the main street to find somewhere, anywhere to eat and saw this little noodle place with people inside slurping away. I always find any kind of noodle soup a safe bet – a flavoursome stock with noodles and fresh herbs, there may be varying degrees in flavour but you can always trust that it will provide a comforting and hearty meal, especially around South East Asia where noodle soups are a staple. 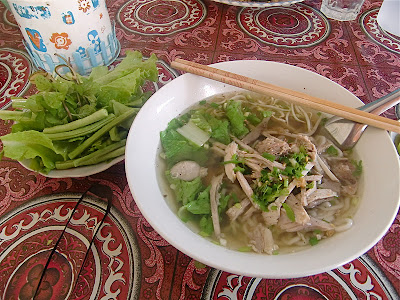 This is feu, a Lao noodle soup dish which is similar to a Vietnamese pho 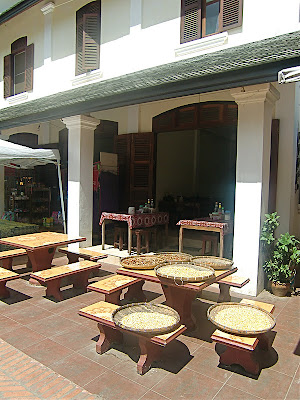 I can’t recall what this noodle place was called but it is located on Ban Pakham Sisavong road (a few stores down from Ancient Luang Prabang Hotel/Café)
In Luang Prabang we found it hard to find little local eateries that sold traditional Lao cuisine, the places that we ended up going to where tailored for Westerners but appeared to do a decent job of representing Lao cuisine.
One night we ate at Tamarind which is known as one of ‘the’ places to go to for an introduction to authentic Lao cuisine. It specialises in Lao tasting platters and also offers cooking classes. The menu contained a lot of explanatory information on Lao cuisine and as the waiters brought out each dish they would describe what it was and how to eat it.
We ordered the tasting plate, grilled pork, steamed fish and bamboo soup. 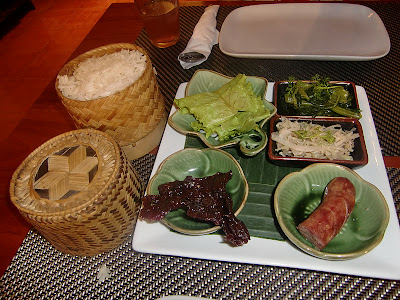 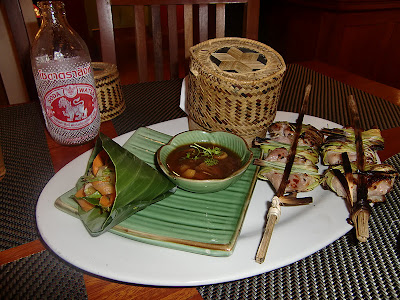 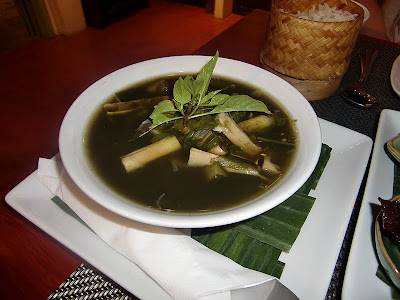 Bamboo soup
At Tamarind, it was the first time that I ate dinner with my hands. The staple food of Laos is sticky rice eaten by hand, you pick up a bit of rice from the bamboo basket and roll it into a ball, and use it to dip into the dishes of condiments and to pick up other ingredients on the table. Eating with your hands seems to be acceptable only if you are a child and have insufficient skills to manage cutlery but in Laos it’s proper dining etiquette. Eating with my hands did bring out the child in me though as I made a snowman with my food. 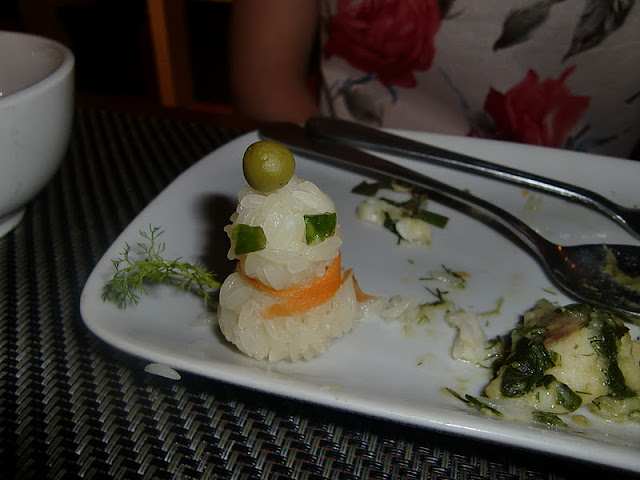 We checked out the Traditional Arts the Ethnology Centre, an independent non-profit museum. It’s a small space but great to visit if you want to get a feel for traditional Lao culture. It was very interesting to see all the traditional costumes and handicrafts of the different ethnic communities within Laos and learn about their lifestyles, especially the customs for courtship and marriage, where a woman’s weaving was a symbol of her marriage potential. We loved the museum shop which had a huge range of fair trade products and souvenirs hand made by different ethnic groups Lao. 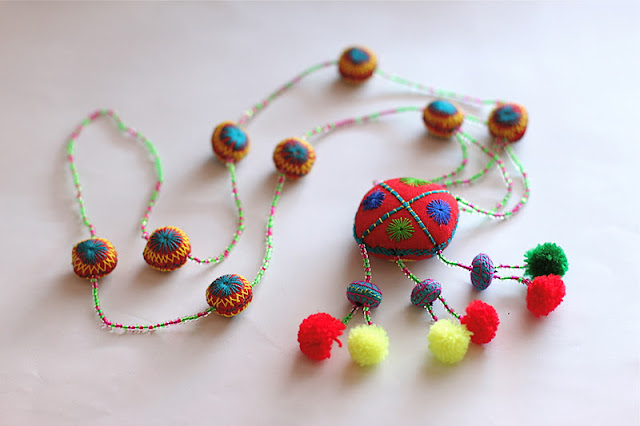 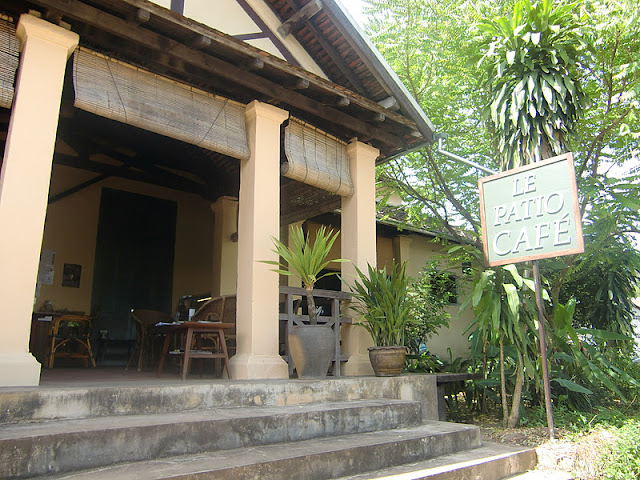 Outside the Traditional Arts the Ethnology Centre was Le Patio Café which served cuisine from different Lao ethnic communities. I ordered a dish from the Hmong people – a pork belly and leafy green stew. Out in the rural areas, meat would be expensive and I thought that this dish exemplified how meat is used sparingly to make a hearty dish, where the amount of pork in the dish was minimal but had been cooked until it was fall apart tender and full of flavour with a large amount of mustard greens. 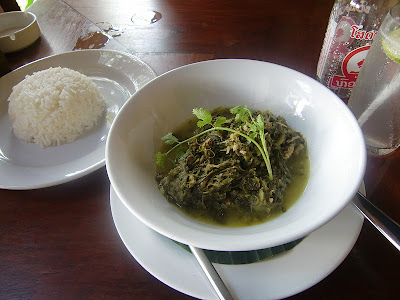 We visited the Ock Top Pop Living Craft Centre which is a traditional weaving centre and learnt about the process for creating silk and watched the women at their workstations hand weaving garments. It was an intricate and labour intensive process and we were told that one day’s work produced only 20cm of a scarf, so completing a whole scarf would take a few days. 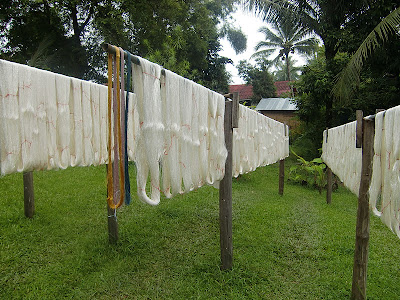 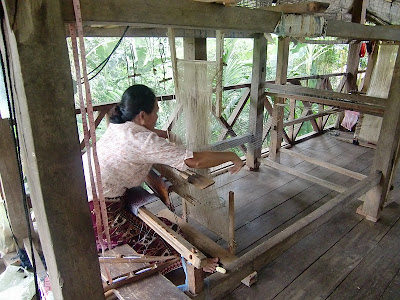 Woman weaving
At the Ock Top Pop Centre we had lunch at the on site Silk Road Café which served traditional Lao cuisine. I ordered a Lao style chicken salad and a traditional Lao sour fish soup. 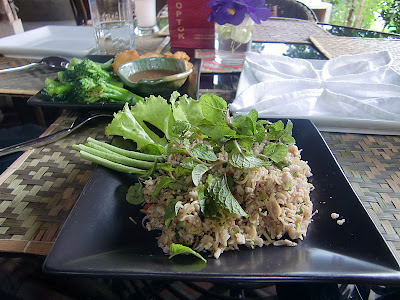 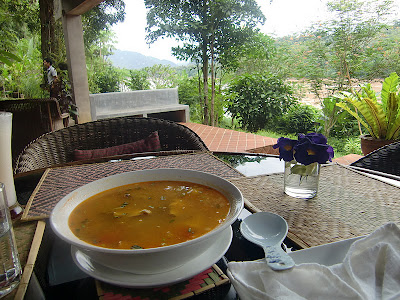 The Silk Road Café is situated on the banks of the Mekong so you get
a lovely view while you eat.
One of my favourite cocktails to order while I was travelling around South East Asia was a mojito as the local mint used in this drink took it to another level. It was especially refreshing for the tropical weather we were travelling in. A great little bar to have a mojito in Luang Prabang is Icon Klub. 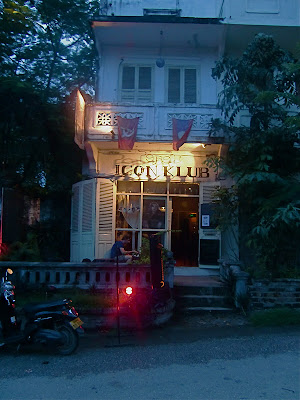 Wondering around town we spotted the local market were people buy all their groceries. 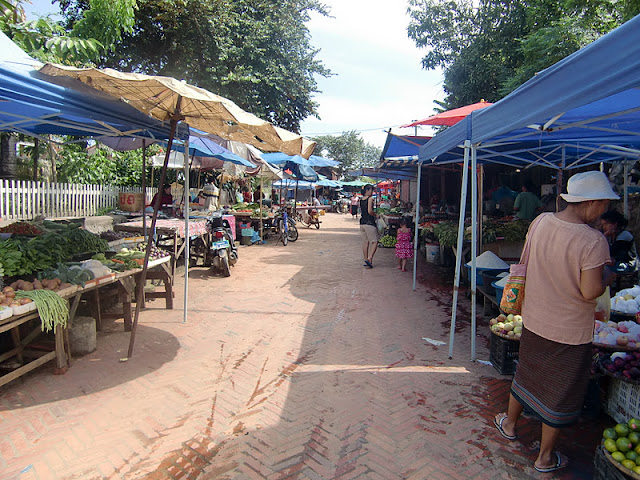 Here’s all the meat, packaged and ready to go. 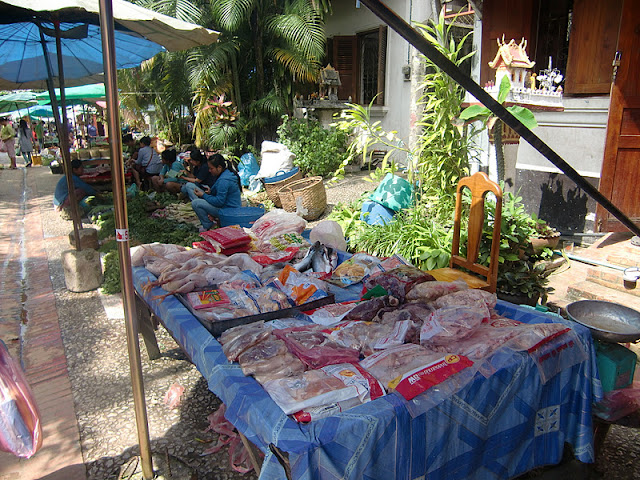 The freshest fish you can get, it’s still alive. 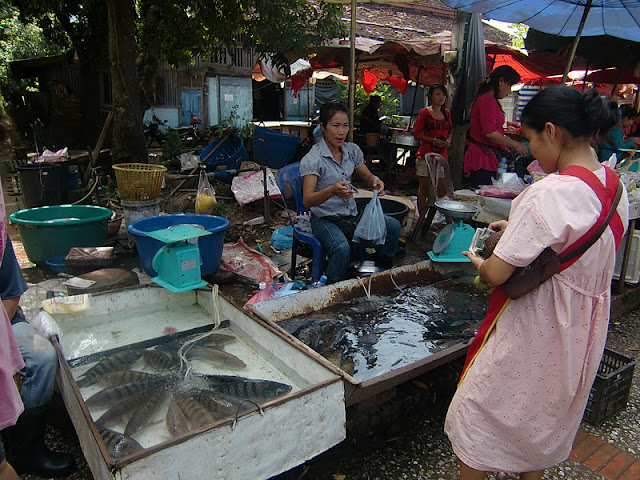 The variety of the greens available was amazing. 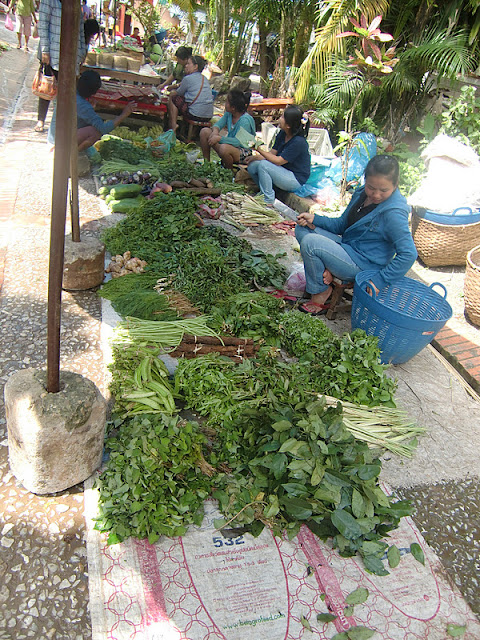 A trip to Luang Prabang would not be complete without an elephant ride and a trip to the waterfalls. It was the first time that I rode on an elephant. You have the option of sitting in a seat on its back or riding the elephant’s neck. I needed a little convincing from Nicola but I finally made the move to sit on the elephant’s neck. On its neck, the hairs prick into you and with every step you can feel the muscles moving beneath you. 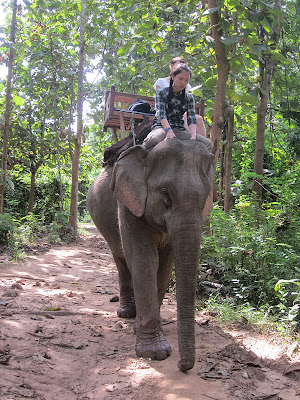 Riding an elephant at the Elephant Village Sanctuary. 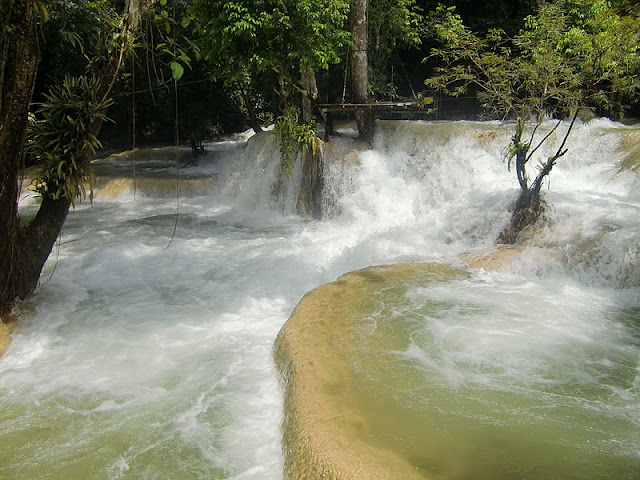