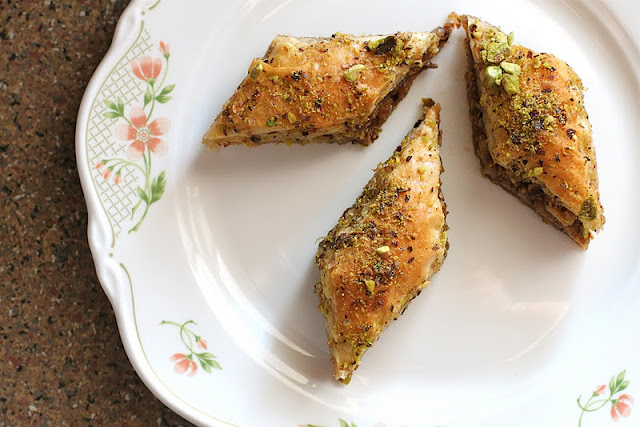 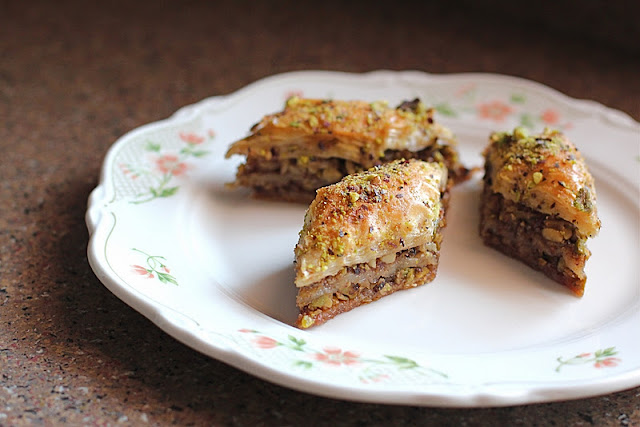 There are certain classic sweets that are universally adored and I think baklava is one of them…well judging from the reactions that I get from people when I tell them I made baklava. But what’s not to like about baklava? Layers of buttered filo pastry, sandwiching a spiced nut mixed and bathed in an aromatic honey syrup – it's a crunchy, sweet and decadent, and also moreish, where one piece is never enough.
I find baklava one of the easiest sweets to make but it’s just a little labourous as you have to layer in sheets of filo pastry and brush some butter between each layer.
I recently made baklava for the first time and everyone who ate it told me it was the best baklava that they had ever eaten (this is not an exaggeration). I adapted a baklava recipe from the Gourmet Traveller. The GT recipe had 500g of filo pastry but when I went to the supermarket I found that the filo pastry came in 375g packets, so I amended the recipe by reducing everything by a third and also added in some other spices (cardamon and nutmeg) to the nut mix.
I find that baklava can be really sweet so when making the honey syrup, taste and balance out the sweetness with the acidity of lemon juice to your desired taste.
Enjoy!
Ingredients
•    150g pistachios
•    150g walnuts
•    50g caster sugar
•    1 teaspoon ground cinnamon
•    ¼ teaspoon ground nutmeg
•    ¼ teaspoon ground cardamon
•    200g butter, coarsely chopped
•    375g filo pastry
Honey syrup
•    200g caster sugar
•    80g honey
•    1 lemon, grated rind and juice only (juice added to taste)
•    200ml water
•    ½ cinnamon quill
•    few drops rosewater and/or orange blossom water to taste
Optional: Extra chopped pistachios for sprinkling over the top of baklava.
Method
Preheat oven to 180C.
Spread the nuts on a baking tray and lightly toast in the oven for 5-8 minutes or until aromatic (toast the pistachios and walnuts on separate trays). Cool.
Combine the pistachios, sugar, cinnamon, nutmeg and caradmon in the bowl of a food processor and process a few times using the pulse button on the food processor. Then add the walnuts and continue pulsing until the nuts are coarsely chopped but not ground. (I processed the pistachios first for a bit before adding in the walnuts as the walnuts crumble more and I found that if I processed the pistachios and walnuts at the same time the walnuts became more ground before pistachios were fully chopped) Set aside the nut mixture.
Melt butter in a small saucepan over low heat, set aside and keep warm. Brush a 3cm-deep, 8x8inch square baking tray with butter. Cut filo sheets to fit tray snugly and cover with a damp tea towel (this prevents the sheets from drying out).
Layer one-third of the filo pastry in tray, brushing butter between each layer. Scatter evenly with half the nut mixture, then top with half the remaining pastry, brushing butter between each layer. Scatter over remaining nuts, top with remaining filo, brushing between each layer with butter. Lightly brush the top with remaining butter.
Refrigerate until firm (around 15 minutes so that it is easier to score), then cut through all pastry layers into 4cm diamonds with a sharp knife. Bake until golden and cooked through (45 minutes-1 hour). Cover loosely with foil partway through cooking if top browns too quickly.
While the baklava is baking, make the honey syrup - combine sugar, honey, lemon rind, cinnamon quill and 200ml water in a saucepan over medium heat, stirring to dissolve sugar. Reduce heat to low, simmer until infused (20 minutes). Remove from heat, strain through a fine sieve, stir through lemon juice and rosewater/orange blossom water to taste and set aside.
Cool baklava slightly (2-3 minutes), pour over syrup evenly, set aside at room temperature to cool completely (overnight if possible). Baklava will keep in tray, covered, for 3-4 days.
Optional: Sprinkle the top of the baklava with extra chopped pistachios. 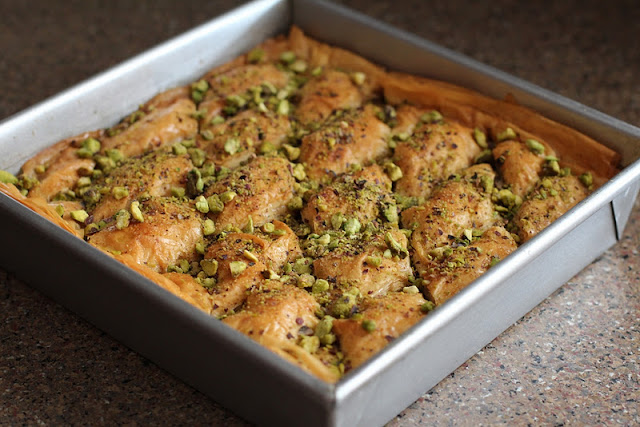 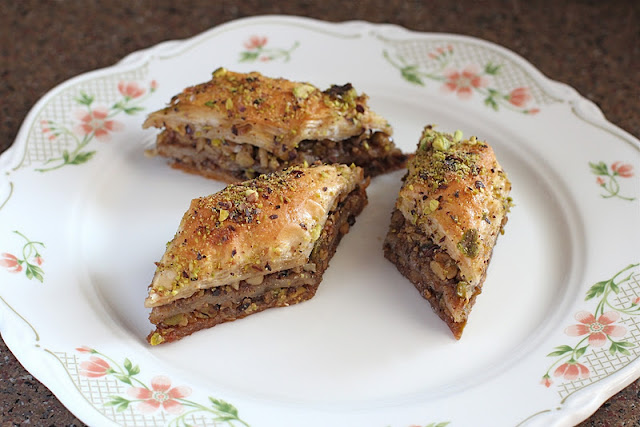 Posted by Blue Apocalypse at 8:02 AM

Email ThisBlogThis!Share to TwitterShare to FacebookShare to Pinterest
Labels: baking