While we were in Bangkok people warned us against going to Ayutthaya because it was flooding. We had already booked our accommodation so we rang the hotel the day before we had scheduled to go and checked on the situation. We were reassured that everything was ok so we took the train to Ayutthaya from Bangkok. We stayed in Ayutthaya for 3 nights, 2.5 days.
Ayutthaya is an island at the intersection of the Chao Phraya, Pa Sak, and Lopburi rivers. Ayutthaya is the ancient capital of Thailand and about an hour outside Bangkok. We were interested in Ayutthaya to visit its UNESCO world heritage listed temples and ruins, and we thought that it would be a nice respite after the craziness that is Bangkok.
When we arrived in Ayutthaya, we experienced our first tuk tuk ride from the train station to the hotel. The tuk tuks in Ayutthaya are larger than the ones in Bangkok and appear to be the transport of choice (we saw very few taxis around).
We ran out of time to visit a floating market while we were in Bangkok so the first thing that we wanted to do in Ayutthaya was check out a floating market. Floating markets are something that you want to see early in the morning, preferably before 9am. When we got into Ayutthaya it was after one in the afternoon and we were told that the only floating market available to us was the Klong Sa Bua Floating Market ‘nicknamed Disneyland’ aka it was made for tourists. We decided to check it out anyway. It was a fluffed up, family friendly affair but nonetheless we had a nice time walking around and taking a ride on the boat around the area. Then we enjoyed a delicious bowl of noodles from a boat vendor selling food. 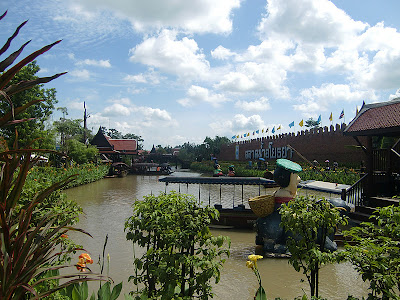 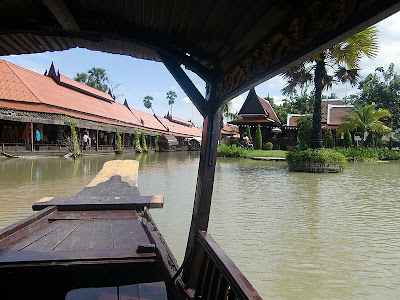 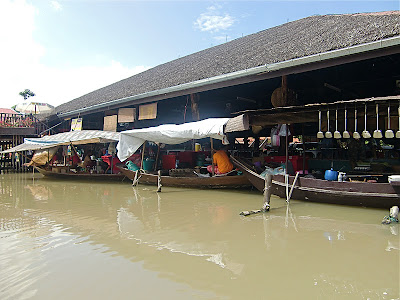 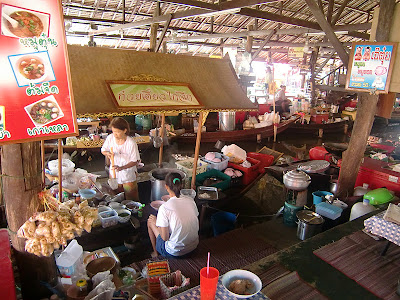 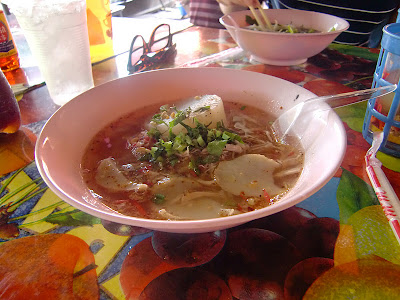 Ayutthaya has two night markets. The smaller Hua Ro Night Market on U-Thong road and the bigger Bang Lan Night Market at the end of Bang Len road which is more livelier and the one that most the locals go to. Wondering around the night markets in Ayutthaya was amazing, the night markets here are all about the food, it was the first time that I felt like I was at a real street food market. It was bustling with activity, with the most food stalls I have ever seen in one place, it felt like everyone in Ayutthaya was at these markets buying dinner.  Apparently it’s cheaper for Thais to eat out than cook at home and it was evident as all the food was provided in take away form, most were already portioned into take away containers or little bags ready to go. So on our first night in Ayutthaya, we ate like the locals did and bought street food from the night markets back to our hotel room. 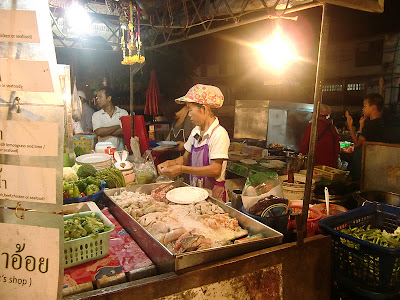 (Stalls at the Bang Lan Night Market. I didn't take that many photos as I thought I would be back the next night...but I didn't come back...) 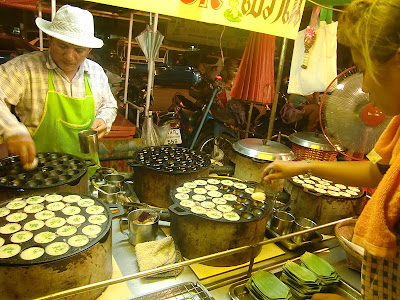 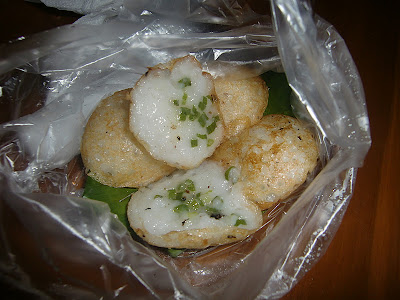 We got dinner at the Bang Lan Night Market. I bought some grilled pork skewers, sticky rice and these coconut poffertjes-like treats. Nicola had an egg and vegetable omelette, and sticky rice mango. We also both had a bottle of fresh guava juice. 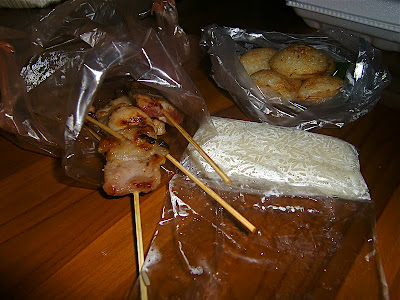 (My street food dinner costing a total of 45 baht ~ $1.50 AUS)
That night I had trouble sleeping, I was tossing and turning a lot, and my whole body was feeling not quite right but I didn’t know why. Later in the night, I was woken up by the sound of Nicola vomiting. I got up to see how she was and then I got that feeling, and the next moment my head was down the toilet….shit, it hit me that we both had food poisoning.
What caused the food poisoning?...well we suspected that it might have been the guava juice that we had which could have possibly been mixed with some local water. You are not supposed to drink the local water anywhere in South East Asia. Nicola’s food poisoning was worse than mine so we suspected that maybe the eggs in her omelette might not have been fresh…
In the morning, I thought that I was feeling better so I decided to go out and buy us some fruit and yogurt. Yogurt has active cultures and probiotics which are good for an upset stomach. I managed to make it down two flights of stairs before feeling faint and had to be helped back up to my room by the hotel staff and I vomited again. The combination of being sick and stepping out into the heat and humidity was not a good idea. We decided that it would be best if we just stayed in bed, in our air-conditioned room for the rest of the day, watching way too much MTV. Thankfully the hotel we were staying at really looked after us, giving us charcoal pills (a pill that we were told would get rid of the poison in our bodies) and an endless supply of electrolytes. They even brought us some toast with jam and fresh fruit up to our room. After a day in bed I was feeling a lot better and in the evening I went out and got us some dinner. I went to the hotel next door which had a restaurant and bought some vegetable soup and steamed rice. 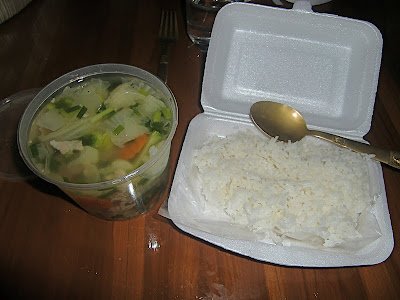 (Simple and hearty food - perfect for recovering from food poisoning)
After a night of rest we had pretty much recovered from the food poisoning and we got out to do some sight seeing the next day. While we had been recovering from food poisoning, a lot more rain had fallen and when we traveled out on a tuk tuk to see some wats, we passed a lot of areas around the city that were beginning to become submerged in water. Our tuk tuk driver told us that his house had been flooded and even though he kept up a positive spirit and smiles as he drove and guided us around, I could see the sadness in his eyes and I couldn’t imagine what it must really feel like to go on day after day like this when you have lost your home. 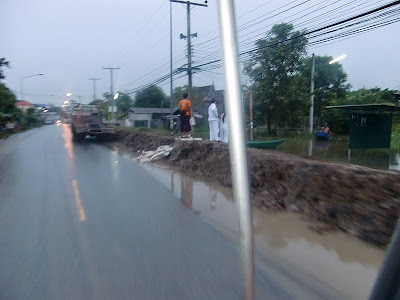 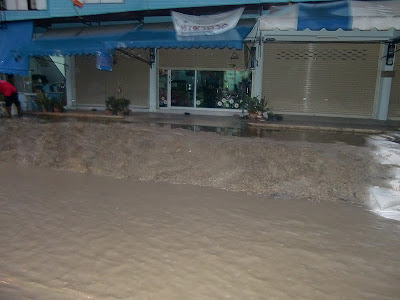 That night we also went on night tour of the some of Ayutthaya’s wats, seeing the wats at night is pretty cool because floodlights illuminate all the temples but be aware of the stray dogs around the place which seem to congregate together in packs around the wats and howl. We were not alone, at every stop there would always be a mini-van unloading a group of Japanese tourists to see the night sights. 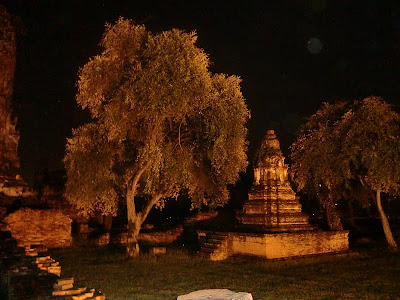 Our time in Ayutthaya was brief, we went to the Disneyland of floating markets and saw a few wats, but most our time was spent in bed recovering from food poisoning.
When I got my shots six weeks before my holiday at the travel doctor, there was a big poster on the wall stating that 40-60% of travelers experience some form of food poisoning while traveling. I was quite sure at the time that I would not become a statistic but then I guess I couldn’t really say that I had experienced eating street food unless I got food poisoning…right?
Everyone warns you about eating street food but you can get food poisoning anywhere and I’ve heard more stories of food poisoning from hotel food and restaurants by friends who have traveled around South East Asia.
So here are some of my tips on how you can reduce the risk of street food poisoning.
But no matter how cautious I had been in eating street food, I still fell victim to it. The locals eat like this all the time and don’t get sick so the real problem wasn’t the street food per se but the fact that I had been brought up in a sterile society, I did no have built up inside me certain anti-bodies and a resistance to harmful bacteria.

The second rule of traveling in South East Asia is  - “Eat like the locals do”
Eating street food is an essential experience when you are traveling as food is an important part of your cultural experiences of a country. It will also be some of the tastiest (and cheapest) food you ever will eat! I ate street food on numerous occasions throughout South East Asia and I only got unlucky once. Life is about taking risks, and the risks started long before I put the food in my mouth - it started when I wondered onto a street where I couldn’t communicate with the locals as I didn't speak their language, when most of my conversations started with me pointing to something and asking “what’s that?” and then “how much?”, when I saw food cooked and prepared on premises that are not as ideally clean as I would like them to be, when I knew that all the meat had probably been bought from the wet market where I had seen with my own eyes the conditions the meat was sold – on tables, uncovered, not refrigerated. I guess the good thing is that the meat would be fresh everyday but in the heat and humidity, you wonder how long it takes for a piece of beef to go from raw to rare and maybe a slight medium rare….
Eating street food is kind of like going to see a big Hollywood blockbuster – you have to in a way ‘suspend your disbelief’ – to accept the situation for what it is, no matter how far removed it may be from your own reality back home, and not think too much about it.
Life is about taking risks, and eating street food was a risk I was willing to take to eat like the locals do. 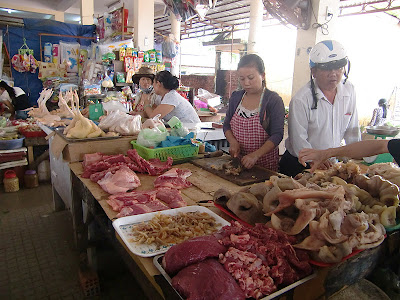 (Meat sold at the markets, captured in Vietnam)
When people are traveling, how comfortable are you with eating street food? Has anyone had any bad experiences?
Stay tuned, my next travel blog stop will be about Luang Prabang...
Related post
Posted by Blue Apocalypse at 9:12 AM