One night when I was out drinking with my friends, one of my friends told me that the meat he missed eating the most being a vegetarian was lamb. Another friend said bacon (surprise!).  Interesting huh? A lot of vegetarians who choose not to eat meat do so because they don’t think it is right to kill animals for consumption and when you ask them what they miss eating the most they crave the cutest (ie: lamb) or the smartest (ie: pigs) animal.


That night I told my vegetarian friends that I would be taking a lamb class in a few weeks at Mondo Butchers. This spawned the question  “Are you going to kill a lamb?” and other questions which queried my commitment to eating meat -


”Would you feel differently about eating meat if you had to kill it yourself?”


People rarely have to kill their own meat. Like the majority of people, I buy my meat from the butchers. I don’t mind handling meat, it doesn’t make me squeamish…I have friends who don’t like to prepare meat and like to by precut/diced and marinated meat from the supermarket/butchers. The closest that I have been to seeing the death of an animal would be watching my dad and uncle kill and gut the catch of their day when they used to go fishing.


If I had to kill my own meat I believe I could do it but only in the most humane way, and the death would have to be swift and quick. I wouldn’t want it to suffer, not only would that be cruel but meat is muscle tissue and when you slaughter an animal is it important to avoid stress. I learnt from reading Harold McGees, On Food and Cooking that -

“It has been recognised for centuries that stress just before an animals death – whether physical work, hunger, duress in transport, fighting or simple fear - has an adverse effect on meat quality. When an animal is killed, its muscle cells continue to live for some time and consume their energy supply. In the process, they accumulate lactic acid, which reduces enzyme activity, slows microbial spoilage, and causes some fluid loss, which makes the meat seem moist. Stress depletes the muscles of their energy supply before slaughter, so that after slaughter they accumulate less lactic acid and produce readily spoiled ‘dark, firm, dry’ or ‘dark-cutting’ meat. So it pays to treat animals well. The methods of slaughter that result in good quality meat are also the most humane. Meat animals are generally slaughtered as untraumatically as possible (page 142)”.

You always hear the horror stories of industrial scale meat production but any cruelty to the animals will actually reduce the quality of the meat so it’s not an economically beneficial thing to do. If you want quality meat, your best bet is to go to your local butcher as they know and value their produce and can give you information on where the meat has come from and how long it has been hung etc.


In Perth, Mondo Di Carne Gourmet Butchers reigns supreme and Vincenzo Garreffa is the "Prince of Flesh". Controversially, Vince was the first butcher in Australia to sell horse meat for human consumption, it was met with much public outrage and he even received death threats. (For the record, I have not eaten horse before but I would be up for trying it if the opportunity presents itself)


I have being keeping my eye out on the cooking classes and meat workshops that Vince runs. When I saw the Spring classes come up, I immediately signed up to the Lamb Extravangaza on Monday 20 September. I like eating lamb but it has only being a recent appreciation, I didn’t grow up eating much lamb and I wanted to learn more about preparing, cutting and cooking lamb. Vince’s lamb class promises this and much more. 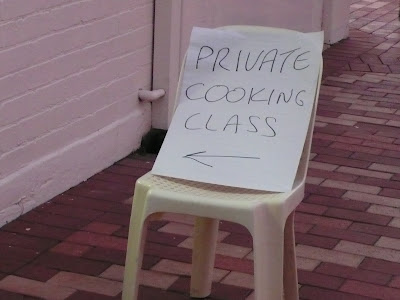 It felt like Christmas, the lamb extravaganza class involved consuming 5 delicious lamb dishes (osso bucco, ord river chick pea lamb, Persian lamb and rhubarb khoresh, spring lamb t-bones and corned lamb silverside) and two trips to the backroom to watch Vince cut up a whole lamb carcase and learn about the different cuts of lamb, and how to cook it from head to toe. Vince believes that one should “try only to waste nothing”. 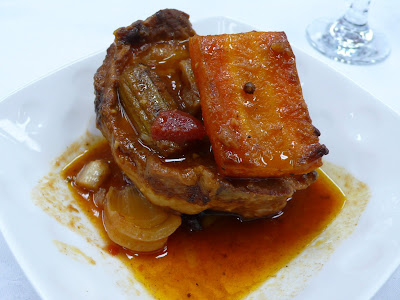 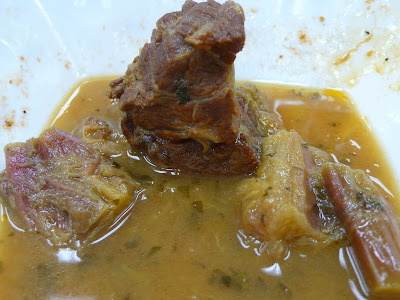 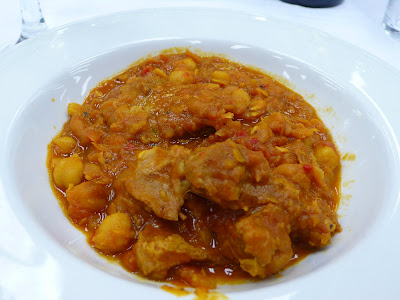 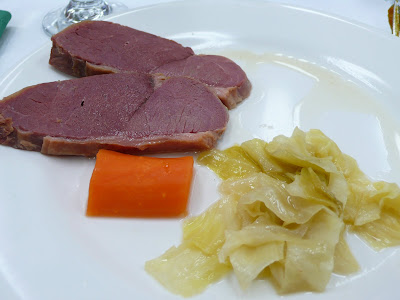 Vince used a little carving knife to show that anyone could cut up their own meat at home, you don’t need a huge knife/saw or special butchers equipment. We were also each given the Spring 2007 edition of Spice magazine which contained a lamb feature by Vince. Vince told us that if we wanted a particular cut of meat and didn’t know how to tell the butcher, we could take the magazine in and point to the pictures of the different cuts of lamb and educate the butcher! Vince also informed us of the importance of aging meat “it’s like a fine wine, it gets better with age” and as Neil Perry puts it “after 35 days magic happens”. 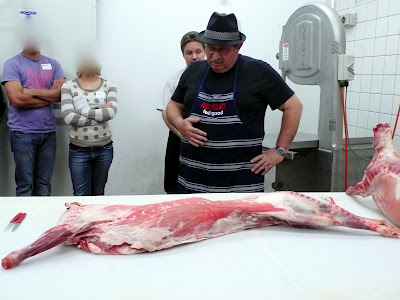 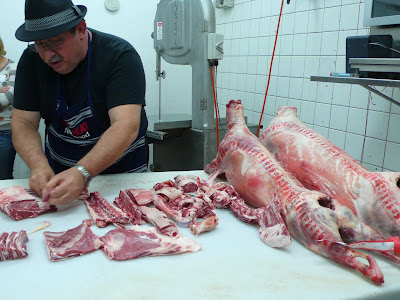 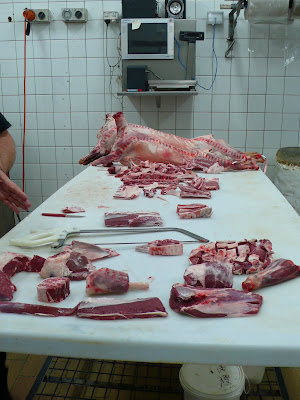 (After)
It was a real joy to hear someone speaking so honestly and passionately about food. It’s this passion that Vince exhibits while he is running the class that makes you want to listen, learn and appreciate. Vince engages you through his sense of humour - “rosette, French tip, French cutlet – everything’s bloody French with lamb it’s disgusting, why can’t it be Italian?” He informs you of important facts - “fat is good for you, it’s good for your brain function” and imparts many words of wisdom “cooking any meat for a long period of time will make it tender, if you complain to the butcher that he gave you a tough cut of meat you are an idiot”. Vince also respects people’s choices in life, when we were in the kitchen to watch Vince fry up some t-bones, he asked “who likes their meat well done?”…there was silence and then one man put their hand up and then a few more but there was a sense of reluctance to admitting to eating well done meat. Vince said that "it’s ok to have your meat well done and if any restaurants turn their nose at you and tells you they don’t do well done you can tell them to f. off. People deserve to have meat the way they like it!" 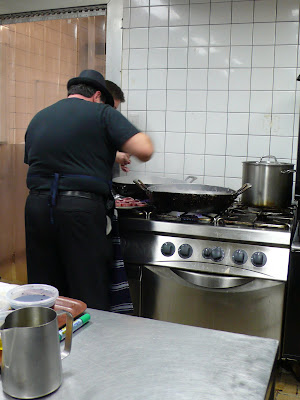 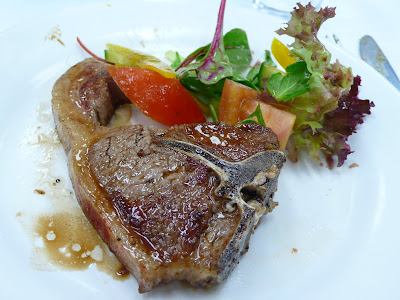 Throughout the class Vince also provided many little cooking tips - “frying the meat beforehand until it gets some caramelisation will enhance the flavour of your stews but don’t stop there fry your vegetables as well to get a bit of caramelisation going before adding it to the stew, this will also add even more flavour”. Vince also demonstrated how to cut and use an artichoke. Round and tight artichokes are the best. 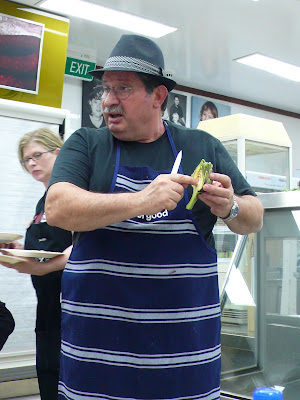 When Vince talked about cooking with garlic he began to explain the wonders of fresh garlic and then called on his helper to go to the backroom and bring out the buckets of fresh garlic so that everyone could take one home (bonus!). 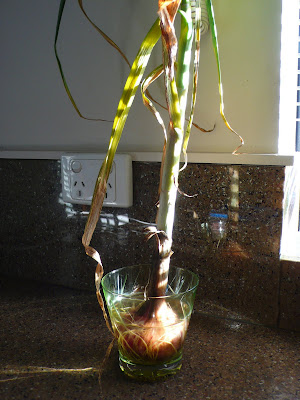 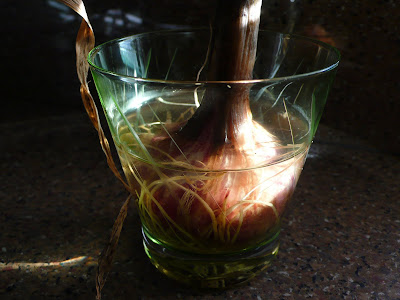 [This is my garlic sitting at home in a cup of water, still thinking about what I should cook with it, anyone have any ideas?]


At the end of the class the message was clear – go home now and start cooking for yourself. There is too much processed food out there and it’s not natural for us to be consuming so much of it. We need to invest more time into cooking and it doesn’t have to be long, hard or complicated - just slowly build up your knowledge and don’t be afraid to experiment and make mistakes. Give yourself a chance to learn but Vince advises that you should “never try cooking a dish for the first time and feed it to your guests, it's a criminal act, you should practice on yourself 2-3 times first”.


Overtime you will build up your knowledge and understanding of how to cook food and you should be able to chuck together a dish with whatever food scraps you have in your kitchen. With a lot of the lamb dishes the effort required for cooking can be quite minimal - prep and chuck together everything into a pot and let it simmer for a few hours, then go out and do some gardening or shopping or read a book and you will come back to a beautiful meal. A McCain’s TV dinner is not a sufficient or an effective substitute.


This was my first Vincenza Gafferra meat class and I intend on taking many more. It was inspiring and reaffirmed to me why I love cooking so much and also why cooking is important to mankind!

Posted by Blue Apocalypse at 11:55 AM