I love making fresh pasta, it has a rich taste and tenderness, and it absorbs the flavour of sauces very well so you only need to make a very simple sauce to go with it.
Another thing that I love about making fresh pasta is seeing all the processes in action and its evolution from a lumpy mixture of egg/flour to dough to thin strands of pasta.
Fresh pasta is not hard to make but it is quite time consuming (!)
All you need to make pasta is OO flour (a fine flour with a lower gluten than normal flour), eggs, olive oil and a little salt.
I used 200g of OO flour, 2 eggs, 1 tablespoon of olive oil and 1 teaspoon of salt to make my pasta dough.
There are two ways you can go about making pasta.
Method (1) Completely by hand, whereby you pour the flour and salt onto a work surface and make a well in the middle. Add in whisked eggs/oil into the well and use your hands to draw in the flour from the sides into the middle, and incorporate the flour into the eggs. Work the eggs and flour together until it becomes dough and knead for 5-8 minutes or until the dough feels very smooth and elastic.
And
Method (2) Using a machine, whereby you put all the ingredients into the bowl of a food processor and pulse a few times until it comes together and the mixture pulls away from the sides. Then turn the mixture out onto a work surface and knead it to form dough for 5-8 minutes or until the dough feels very smooth and elastic.
Tip: When you knead the dough - if it becomes too dry you can add a little water, if it is too wet you can add a little flour.
After you have made the dough, wrap it in cling film or a damp cloth and let it rest at room temperature for 30 minutes. This will give the dough time to relax and soften for rolling out into pasta.
Either method will give you the same result but using a food processor is quicker as it does all the hard work of incorporating the flour and eggs together for you.
Occam’s Razor states that “entities must not be multiplied beyond necessity”, this principle is often expressed as “of two equivalent theories or explanations, all other things being equal, the simpler one is to be preferred.”
Occam's Razor should not be just reduced to the idea that ‘the simplest explanation/method is the best or correct one”, which is how it is often mistakenly used and interpreted as.
The Simpsons are probably to blame for this.
Episode 6, Season 10: Grandpa vs Sexual Inadequacy

Bart: Okay, it's now painfully clear. The adults are definitely paving the way for an invasion by the saucer people.
Milhouse: You fool! Can't you see it's a massive government conspiracy? Or have they gotten to you too?
(He leaps on Bart and they start grappling on the floor.)
Lisa: Hey! Hey! Hey! Stop it! Stop it! Why are you guys jumping to such ridiculous conclusions?! Haven't you ever heard of Occam's Razor? The simplest explanation is probably the correct one! (This is WRONG! Please note: it only applies to cases when there are two competing hypothesis, equal in all other aspects, then you should select the simpler hypothesis!)
Bart: So what's the simplest explanation?
Lisa: (Sarcastically) I don't know, maybe they're all reverse vampires and they have to get home before dark!
Everyone: Aaah! Reverse vampires!

"Of two equivalent recipes or cooking methods, all other things being equal, the simpler one is preferred".

Thus, I choose to use method (2) and make pasta dough using a food processor. I prefer the simpler method over the more complicated method but only because it produces the same result. Nowadays there are so any kitchen gadgets and gizmos out there to provide shortcuts and reduce cooking time, for example, pressure cookers, thermomix. I think it’s a good idea to take advantage of all this!
So after the dough has rested. Run it through a pasta machine to firstly stretch the pasta to make it thinner, silky and elastic, and then use the cutters provided with the pasta machine to cut the desired shape.
After cutting the pasta, it is important to dry it thoroughly if you want to store it for later use to ensure that it stays nice and fresh, and doesn’t go moldy. I recommend hanging the pasta on some coat hangers from the cupboards above your stove/kitchen bench. 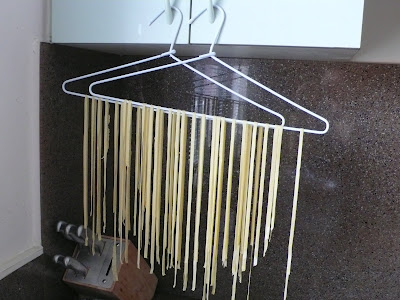 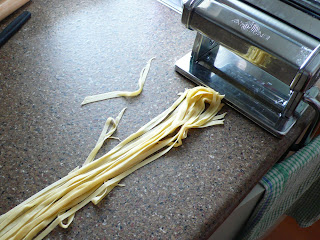 I used my pasta machine to make some angel hair pasta and fettuccine.
Over the weekend I experimented with cooking different kinds of pasta sauces for the fresh pasta I had made.
Sauce 1 – Pasta with olive oil, garlic, shallots and chilli sauce with prawns, roasted grape tomatoes, rocket and goats cheese. 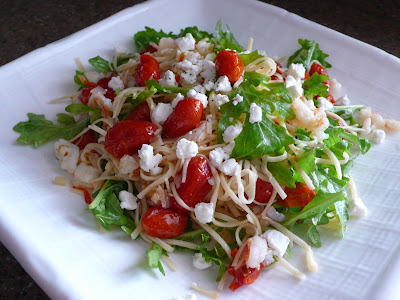 ‘Aglio e Olio’ is a traditional pasta dish which is very simple to make. You basically lightly sauté crushed garlic in olive oil and then serve it with spaghetti, topped with parsley and grated cheese.
I used the idea of aglio e olio and expanded it. I lightly sautéed finely diced shallots, garlic and chilli in olive oil until fragrant, then added in some diced prawns and cooked through. I tossed the sauce with angel hair pasta, along with some roasted mini roma tomatoes and rocket leaves. I then topped the pasta with some crumbled goats cheese and squeezed over some fresh lemon juice.
Verdict 1: I really like the combination of olive oil, garlic, shallots and chilli. A simple but very tasty pasta sauce. The addition of diced prawns were also a treat as it took on the flavours of the garlic and chilli. The tomatoes, rocket and goats cheese rounded everything nicely.
Sauce 2 – Pasta with tomato sauce, prawns, spinach and roasted eggplant. 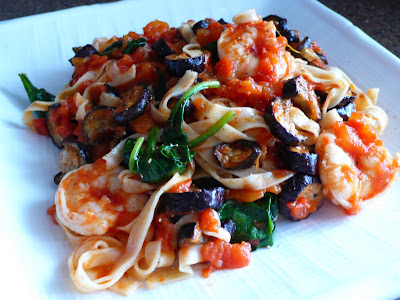 I wanted a very simple and basic tomato sauce where I would get a pure tomato taste. I used a recipe from the Essentials of Classical Italian Cooking by Marcella Hazan which contained just tomatoes, butter and an onion which you put in whole and then removed before serving (there was no olive oil used). When I first added in the butter and tasted the sauce I was concerned that the flavour of the butter would overwhelm the tomato but given time and a steady low simmer for 50 minutes, the butter and tomato incorporated together well and provided a really nice taste. Once I had finished simmering the tomato sauce I added in some prawns and cooked them through for 2-3 minutes. I then turned off the heat and added some spinach leaves into the saucepan and stirred through until they were wilted. I tossed the fettuccine pasta in the tomato sauce with prawns and spinach, and also added some roasted eggplant.
Please note that when you using fresh tomatoes to make a sauce instead of using the canned tomato variety, remove the seeds and jelly inside the tomato (after blanching) before dicing, this will give you a cleaner sauce and also the majority of the flavour is in the flesh of the tomato, whilst the bitterness resides in the skin, seeds and jelly.
Verdict 2: The tomato sauce was nice but in comparison to the Sauce 1 it lacked some punch.
Now that I have made an oil based sauce and a tomato based sauce, it was time to try making a cream based sauce.
Sauce 3 – Pasta with alfredo sauce, roast chicken, roast pumpkin and topped with diced avocado. 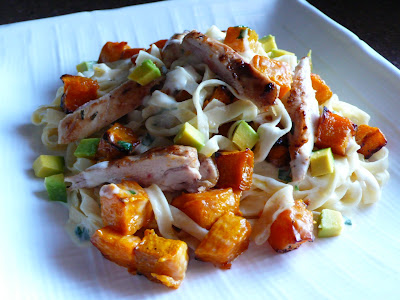 Alfredo is another very simple pasta sauce to make. You basically combine butter and cream together in a saucepan and simmer for a few minutes until it thickens, then add in a little crushed garlic, salt and pepper and a tiny grating of nutmeg. Whisk in grated parmesan and heat through until it melts. Stir in some parsley and serve with pasta.
I toss the pasta in the alfredo sauce and then added some roasted chicken, roast pumpkin and diced avocado. I roasted some chicken thigh with a little thyme, lemon zest, lemon juice, butter and olive oil.
Verdict 3: The alfredo sauce with pasta went really well with the roasted pumpkin. The roasted chicken probably wasn’t required as it didn’t really add anything to the dish. I ate the chicken separately from the pasta rather than with the pasta.
The Conclusion – Sauce 1 was the best and something that I will definitely make again and again.
Posted by Blue Apocalypse at 1:41 PM