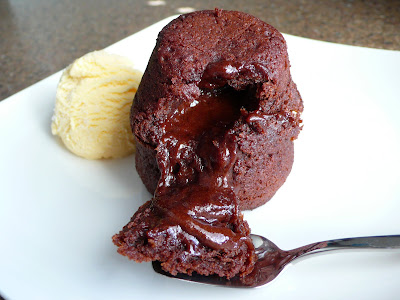 Most people would agree that chocolate is awesome and what better chocolate desert to have than a chocolate fondant with its oozing melting chocolate insides, served hot, straight from the oven with icecream.
Ingredients (for 2 dariole moulds)
•    50g butter, plus extra for greasing
•    cocoa powder for dusting
•    50g dark chocolate, chopped into pieces
•    1 egg
•    1 egg yolk
•    60g caster sugar (around 1/3 cup)
•    50g plain flour (around ½ cup)

Method
Grease the moulds by brushing melted butter all over the insides and then add in a spoonful of cocoa powder.  Tip the mould around so that the cocoa completely coats the butter and tap out any excess.
Place a bowl over a pan of barely simmering water and slowly melt the chocolate and butter together, then leave to cool for about 10 minutes.

Whisk the egg, egg yolk and sugar together in a bowl until it is thick and pale, then sift in the flour and beat together.
Gently fold in the melted chocolate mixture into the egg mixture and mix together until combined.
Pour the batter into the prepared moulds and chill in the fridge for at least 20 minutes (this allows the chocolate to set a bit).
Preheat oven to 170C, place the fondants on a baking tray and bake for 12 minutes until the tops have formed a crust and the fondants are starting to come away from the sides of their moulds.
Remove from the oven and run a knife around the edges of the fondant to loosen, invert onto a plate and slowly ease the fondant out of the mould.
Serve with icecream!
Posted by Blue Apocalypse at 8:20 AM