A classic French desert, crème caramel comprises of rich custard that has a lovely silken texture with a layer of soft caramel on top.
Crème caramels are also common in Vietnam where it is known as bánh flăng or kem flan (they were brought over by the French!). 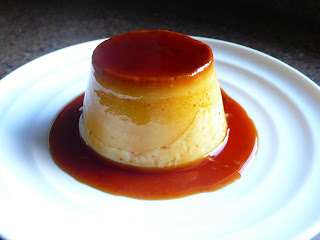 Makes around 6.
Ingredients for caramel
Ingredients for custard
Method
To make the caramel – put the sugar and water in a saucepan and bring to boil over medium heat. After a few minutes it will boil furiously and slowly start to change colour from blonde, to light brown and then to a dark caramel brown. Swirl the saucepan around to even out the caramelisation and ensure an even colour. Once the mixture has reached a deep caramel colour, immediately remove the saucepan from heat and pour equal amounts into each mould (I use dariole moulds). Hold the moulds at the top of the rim and swirl to coat the bottom and halfway up the sides (be careful as the moulds become quite hot from the caramel). Let cool for a few minutes and allow the caramel to set.
[Do not stir the mixture when it is cooking or let the caramel go too dark as it will burn and add a burnt taste]
To make the custard – heat the milk and vanilla extract in a saucepan over medium heat until the surface barely breaks a simmer/to scalding point, then remove from heat and  let steep for around 20 minutes to let the vanilla flavour infuse into the milk.
Whisk the eggs, egg yolks and sugar together until the mixture is a pale yellow. Continue whisking and slowly drizzle in the hot milk to temper the eggs so that they won’t curdle (ie: so that you don’t cook the eggs). Pour this mixture into the caramel lined moulds.
Set the moulds in a baking dish lined with a paper towel (this helps to prevent the moulds from sliding around). Fill the baking dish with boiling water so that it comes to about two thirds up the sides of the moulds. Cover the baking dish with foil (this is to prevent a skin from forming while the custard cooks). Bake at 170C in a preheated oven for 45 minutes until the custard just sets and doesn’t jiggle, and a knife inserted into the center comes out clean. Remove from oven and let the custards remain in the baking dish for an hour, then remove the custards from the baking dish and allow to cool to room temperature before refrigerating. Cover each mould with plastic wrap and chill in the fridge for at least 6 hours or overnight.
To serve, fill a bowl with hot water and place a mould in the water for around 20 seconds, then carefully run a knife around the inside of the mould. Place a serving plate on top and quickly upturn the crème caramel and jiggle around/shake up and down to loosen (until you hear a satisfying splodge!). Then slowly remove the mould, allowing the caramel to gently spill down the edges of the crème caramel. 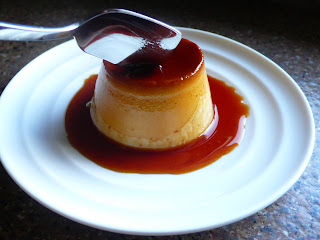 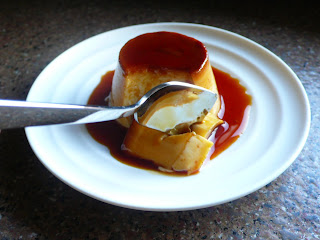 Posted by Blue Apocalypse at 9:49 AM