Red cooking is a Chinese method of cooking where meat is slowly braised with ingredients (such as soy sauce and/or caramelised sugar) which results in the meat obtaining a rich dark red-brown colour. 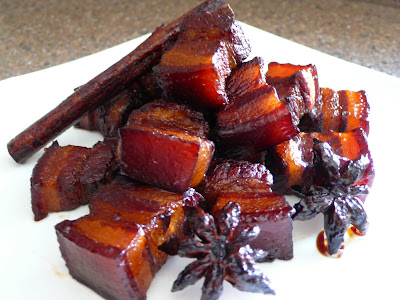 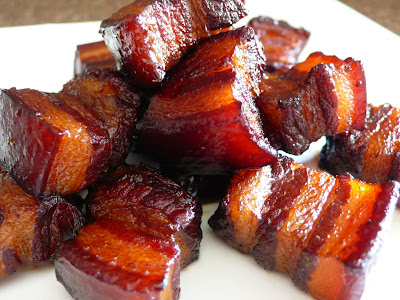 This dish was Chairman Mao Zedong’s bitch. The dish is widely regarded as the ‘brain food’ which provided Mao with the wits to defeat his enemies!

It consists of pork belly in a thick, sweet dark sauce with aromas coming from the spices of star anise and cinnamon.

Mao loved this dish and it was a frequent request from his personal chefs in Beijing. Many restaurants in China call it “The Mao Family’s red-braised pork”. The people of Mao’s home village Shaoshan (a country city in the Hunan Province) even declared it a health food - “Men eat it to build their brains and ladies to make themselves more beautiful”. (But in reality this dish is not health food! – it is quite fatty due to the layers of fat and meat of the pork belly which is what makes it taste so damn good as it yields very tender pieces of meat and all the flavours of the sauce as infused into the fat)

Mao was so fond of this style of simple, home-style peasant cooking that he went to great lengths to ban fine dining in many Chinese restaurants.

The local government in Hunan recently issued official guidelines to restaurants to standardise the cooking of the dish, so that everyone could enjoy it the same way that Mao did and also stem the tide of imitations that crowd Chinese restaurants.

According to stringent instructions from the government's food quality supervision and testing institute, true hong shao rou can only be made with the meat of rare pigs from Ningxiang county. Officials have designated the pig, which has been bred for nearly 1,000 years, as an "agricultural treasure".

Restaurants which do not follow the correct procedures will not be allowed to title themselves as "authentically" Hunanese.

(I have provided a guide for the star anise and cinnamon, you should add as much as you desire the flavours to come through the pork) 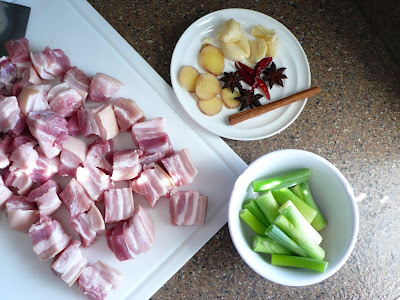 Par-boil the pork – put the pork pieces into a pot of boiling water and simmer for 1-2 minutes until partially cooked. Rinse pork under cold running water and drain well. Par-boiling is a technique often employed on meats for braising, it improves the end result of the dish, the sauce comes out clearer and more visually appealing, and the meat absorbs the braising flavours more thoroughly.

Heat up wok and melt the peanut oil and sugar over medium high heat until the sugar is caramelised and turns a rich caramel brown (about 2-3 minutes).

Add the pork pieces into the wok and fry it in the caramelised sugar for a few minutes until the pork is well coated. Then add in the Shaoxing rice wine to deglaze the wok.

Then add in the garlic, ginger, chillies, spring onions, star anise, cinnamon stick, dark soy sauce, light soy sauce and a pinch of salt. Stir fry all together (1-2 minutes). Then add in water/stock, bring to boil and simmer for 5 minutes.

Transfer the pork from the wok to a pot and simmer on low heat for 1 hour (cook until the pork becomes very soft and tender). Stir the pork even now and then to make sure that the pork at the bottom of the pot does not stick/get burnt. Turn the heat up during the last 10 minutes to reduce the sauce, at this stage also taste the sauce/pork and season with a little salt or sugar to taste.

Note: This dish like most stew/braised dishes is better left overnight and reheated the next day (to allow the flavours to develop).

Part of what makes this dish so good is the layers of fat and meat so make sure that you get a good cut of pork belly which has some nice layers. I get my meat from So Fresh Butcher in Northbridge. It’s in 375 William Street, Northbridge. 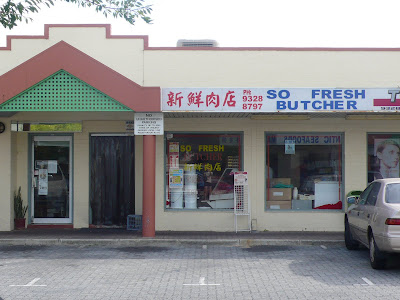 Here are some of my other pork belly recipes:
Posted by Blue Apocalypse at 8:06 AM