What to eat in an Apocalypse – Canned Apocalypse.

In this day and age, when everyone is trying to cook more from scratch using fresh produce, eat better, healthier and sustainably … after much research, I am reluctant to say but I have come to accept that in the event of an apocalypse, canned foods will become your best friend. The reality is that you’ll be fighting your neighbour for the last can of baked beans and it will no longer be anything to be ashamed of.

Throughout human history, food preservation has been essential to survival. Traditional methods of preserving foods include drying, salting, smoking and pickling. Modern food processing was developed in the nineteenth century to serve military needs and canning was invented as a cheap and effective method of preserving large amounts of food for long periods of time. Canning is a form of sterilisation, which involves cooking food, sealing it in cans or jars, and boiling the containers to kill or weaken any remaining bacteria and micro-organisms which cause food decay. The advent of canned food was valuable for feeding troops on the battleground and enabled the extension of military campaigns and larger scale wars. Canned food was then adopted commercially due to the rise in demand for convenience food for working families. Having some canned food in the pantry now would be a staple for most families.

It’s interesting to note how a lot of modern technological advancements have occurred during wartime, in times of adversity, technological development is accelerated as we adapt and create tools to solve problems. During the Second World War, there was increased funding for computer development to exploit its potential strategic importance and shortages of natural rubber led to the US government to embark on a program to produce a substitute, leading to improved synthetic rubber production. The capabilities of the Internet were also advanced during the Cold War to create a virtual communications network that would be immune to a nuclear attack.

So I wonder what technological developments the impending apocalypse will bring?

Looks like the Japanese are already ahead in the game. 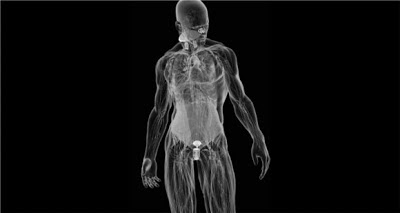 Japanese design studio Takram are designing a set of robotic organs called the Hydrolemic System which regulates how much water the human body can retain and recycle. This system could keep people alive on just 32 millilitres of water a day!

This year I have noticed a lot of articles popping up on 3D food printing. Is 3D printing the future of food in an apocalypse?

3D printing could radically change the nature of food and how we consume it.  Edible inks, well anything with a liquid consistency are used to print food that can potentially look like anything. This technology could convert alternative ingredients such as proteins from algae or even insects into tasty looking products by grounding it up and mixing with other liquids to create novel food inks. A food printer could also open the pathway to personalised food where nutritional requirements could be customised and food preferences met.

3D printing is still in its infancy so in the meantime, canned is the way to go. It is convenient to stock up on canned food in an apocalypse. It’s cheap and accessible to all.

What canned foods do you currently have in your cupboard? Have you stocked up?

There are many benefits of eating canned food in an apocalypse:

•    Canned food is a safe option. Did you know that you should avoid plant life unless you know for a fact that it’s edible (not poisonous) because plants have an array of mechanical and chemical defenses against insects and herbivores. Animals, fish and insect life are a better bet. At least you can without a doubt know that canned food will be safe to eat as long as it is still sealed and the container has not been damaged.

•    Canned food has a long storage life. If stored well in cool, dark and dry conditions at room temperature (between approximately 20-25 C degrees) and not opened or dented, its storage life can be prolonged beyond 2-4 years. Canned food as old as 100 years have been found in sunken ships to still be microbiologically safe to eat.

•    Canned food is convenient to prepare as the food inside the can has already been cooked during the canning process so you don’t really need to cook it before eating. Bonus! Cooking time = Zero.

•    Contrary to popular belief, canned food can be more nutritious than their fresh counterparts. Canned pumpkin has 20 times as much vitamin A as fresh pumpkin because the intense heat of canning breaks the fruit’s beta carotene away from the protein to which it is normally bound. Canned tomatoes contain as much and sometimes more lycopene (cancer protective carotenoid) as fresh ones. Canned salmon is higher in calcium than fresh or frozen salmon because the salmon is canned with its calcium-rich bones, where the canning heat process softens them so they are easily ingested with the meat of the fish.

•    Empty cans have versatile uses – you could use them to store things, make a ‘two cans and string’ telephone to communicate with fellow survivors or use as a weapon to throw at zombies. 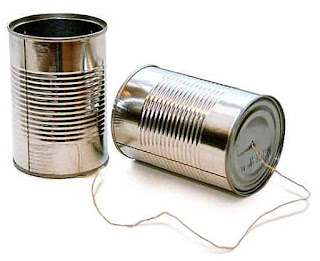 Here are some meal ideas using canned foods I have developed for Apocalyptic times. I have used canned ingredients as well as other non-perishable goods like spices, flour and instant noodles. Stock up!

Warning: There were no fresh ingredients used in the following recipes. This was a first for me! 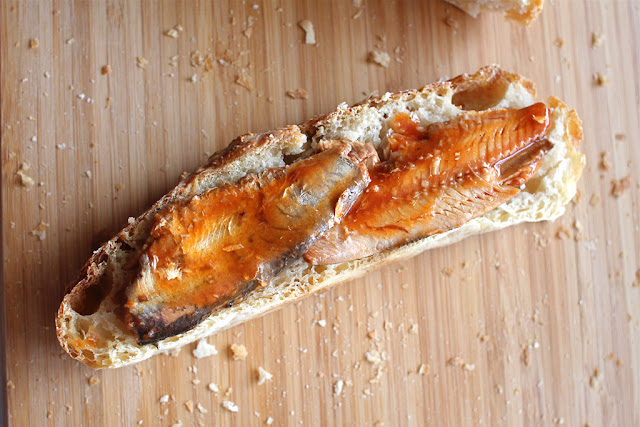 Bread is a food staple and nothing beats fresh bread straight from the oven. I have never made bread before and wondered what would be the easiest way to make bread in case I ever have a craving for it in an apocalypse. I found a no knead bread recipe from the New York Times by Jim Lahey which has become quite well known as the go to simple bread recipe to make at home. It was very easy to make and required almost no effort, and the result was crusty bread with an interior that is spongey and light. 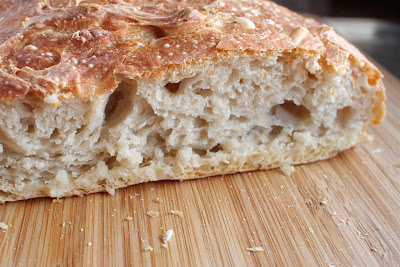 Canned sardines are the Asian equivalent of canned tuna. I ate canned sardines with tomatoes quite a bit when I was young because my family was poor and it provided a cheap and easy meal. My mum would often prepare it for lunch and we’d stuff a crusty Vietnamese style bread roll with sardines.

Sardines on fresh baked bread! Couldn’t think of a better way to start the day if I was living in an apocalypse. 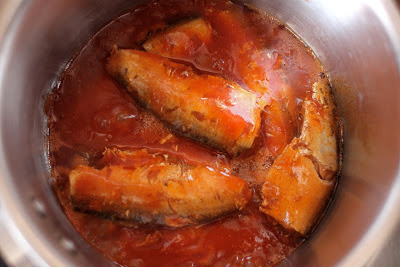 I always heat the sardines through but you could probably just have them straight from the can. 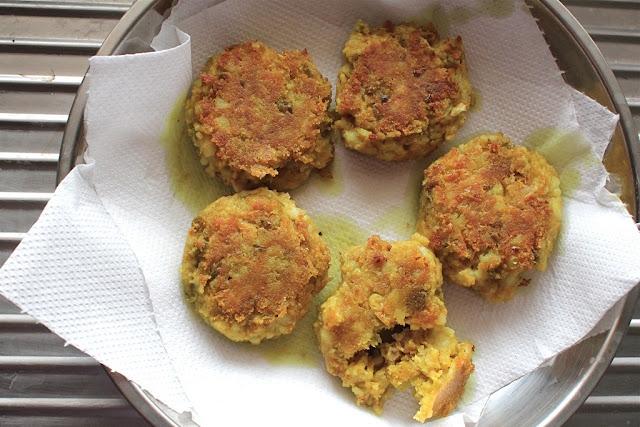 Vegetables are readily available canned. In its processed form, straight from the can, I do not find canned vegetables very pleasant to eat as the canning process renders vegetables overcooked resulting in a decline in flavour, soft and mushy (basically blah!). But I found a way to add texture and make canned vegetables palatable – mash up vegetables with spices and make them into patties. The spices provide flavour and frying the patties gives them some crunch factor. A lot of canned vegetables are preserved in just water and salt, thus canned vegetables tend to be salty which reduces the need for additional seasoning. Tip: do not need to add any salt when cooking with canned food.

Add 1 can of potatoes (drained and chopped into 3cm pieces), ½ can of butter beans (drained), ½ cup of peas (drained), ¼ cup of breadcrumbs, 1-2 teaspoons of cornflour and 2-3 teaspoons of spices to taste (I used a mix of ground cumin, ground paprika and ground turmeric). Use a potato masher to mash everything up roughly. Shape the mix into patties that are about 1.5 cm thick and 5cm in diameter. Heat oil in a frying pan and fry the patties until golden brown on each side. 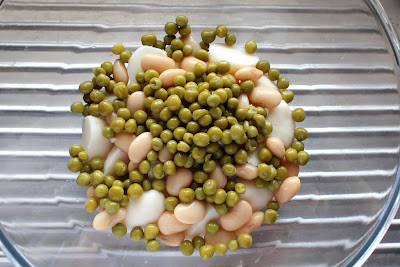 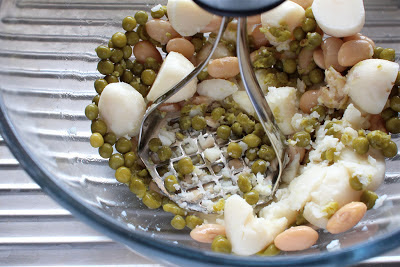 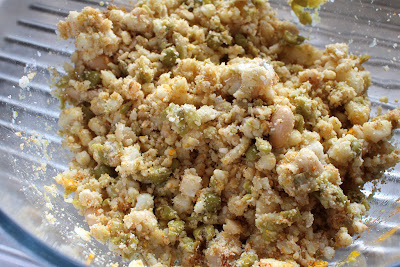 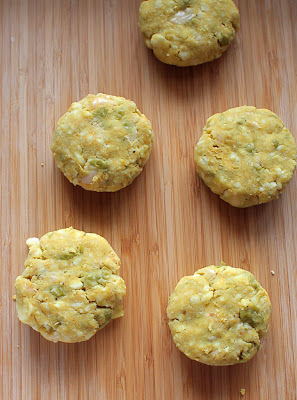 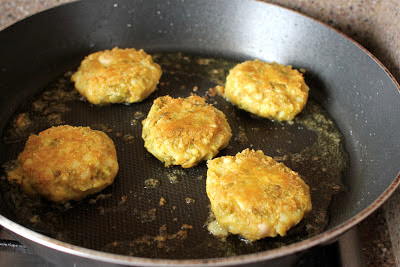 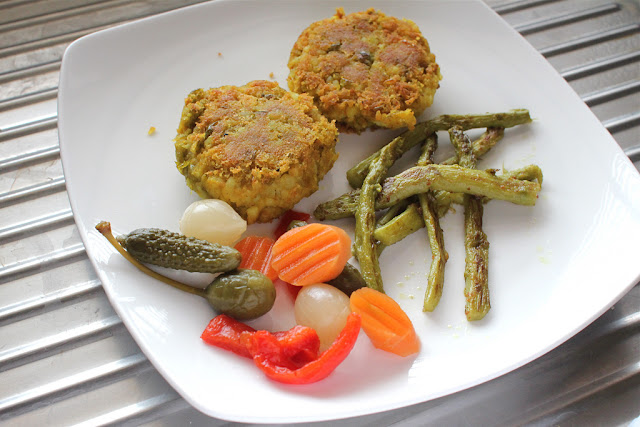 There is always a stash of instant noodles at my parents house (essentials for any Asian household) and growing up I ate instant noodles as much as others would have eaten fast food. They are bad for you but tasty with an addictive dose of MSG and artificial flavours, and can always be depended on for quick meal fix. Instant noodles in my household are never eaten alone, they are always padded out with whatever meat and vegetables can be found lying around in the fridge. All that is required is hot water, although sometimes it can even be consumed directly as a snack without further cooking.

So in an apocalypse I can imagine that instant noodles will become a go to meal for me, made into a gourmet meal with the addition of canned vegetables such as bamboo shoots and mushrooms, canned salmon, plus some nori sheets. 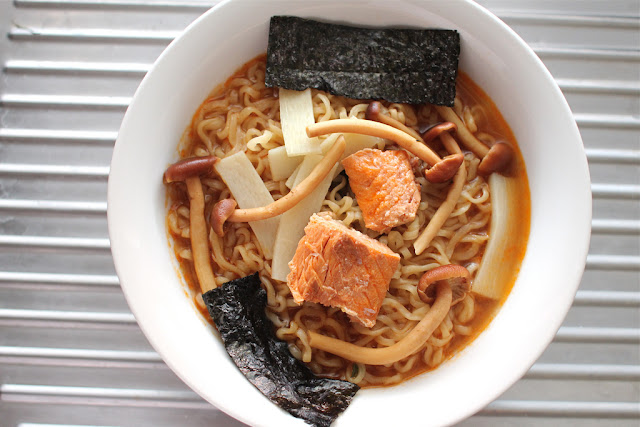 Do you cook with canned foods? Do you have some recipes to share?

Check out my other Apocalyptic Posts:

Posted by Blue Apocalypse at 7:41 PM