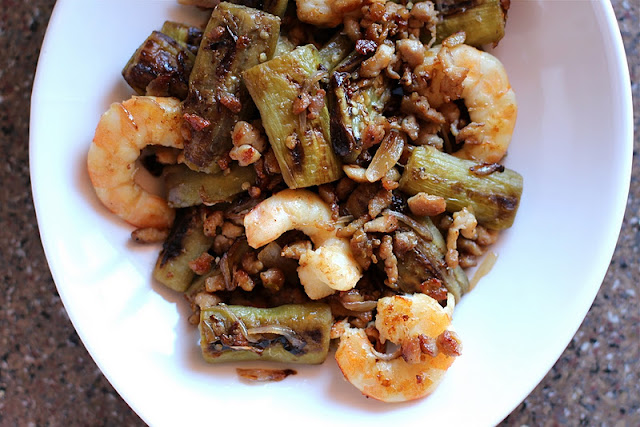 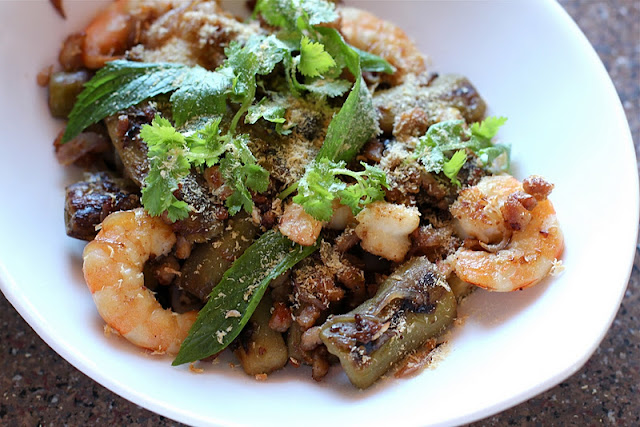 Eating out always gives me inspiration to cook new dishes. When I eat a dish that I love, I always want to try replicating it at home and I have varying degrees of success.

My inspiration for cooking this dish was a spicy eggplant salad that I had in Bangkok at Chote Chitr. Chote Chitr was one of the recommended places in the Gourmet Travellers Bangkok dining, local style article. The spicy eggplant dish was a must-have and it did not disappoint. The grilled eggplant was smoky and delicious, and drenched in a sweet, sour and salty sauce. 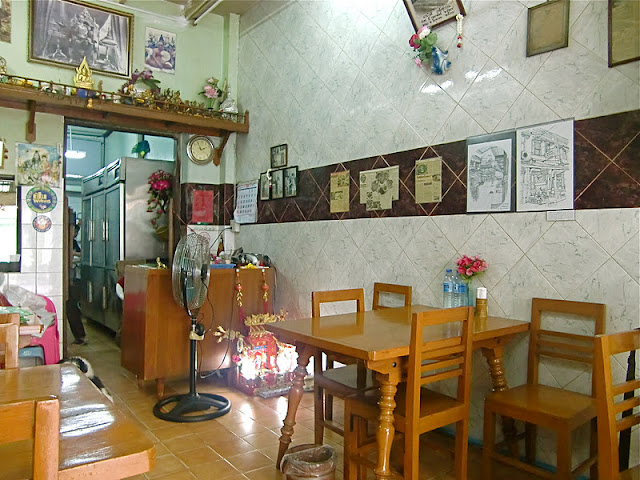 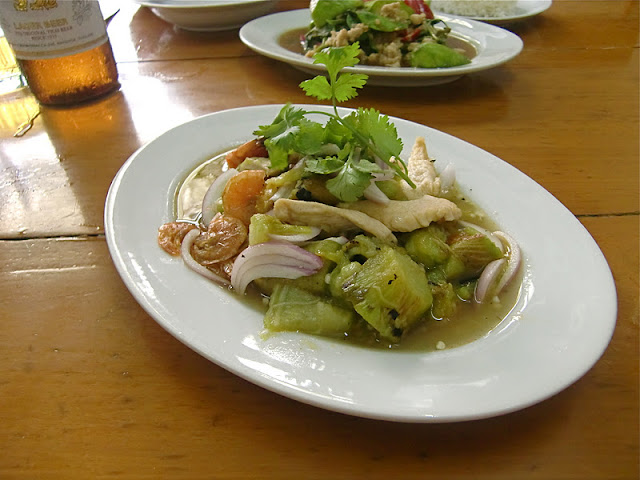 I google some recipes and consulted David Thompson’s Thai Food, and in the end I adapted Thompson’s grilled eggplant salad recipe using its seasoning and addition of ground dried shrimp on top. I also put my own twist on the dish and added in minced chicken and prawns. It became more of a stir fry than a salad, and it is worlds apart from the dish that I had at Chote Chitr but I was pretty happy with the outcome. I had created a dish that is packed with flavour and had a good balance of flavours that you would expect in a Thai dish of hot, salty and sour. I liked how the ground dried shrimp provided another dimension of flavour by injecting an extra hit of umami to the dish (this is a way of garnishing that I will note for future dishes).

When using eggplants for cooking, it is always recommended that you reduce some of its bitterness and also remove excess moisture. I have come across many different ways for preparing eggplants including soaking it in salted water, briefly microwaving before cooking or weighing down the eggplant with a heavy plate, but I simply sprinkled salt on the eggplants and let it sit for 30 minutes or more. Eggplants have a sponge-like flesh which soaks up everything, salting eggplants draws the moisture out and compacts it, which reduces the amount of oil absorbed during cooking and also improves its flavour. Contrary to popular belief, salting eggplants does not remove its bitterness, but helps to mask bitter tastes (reference – Harold McGee's Keys to Good Cooking). 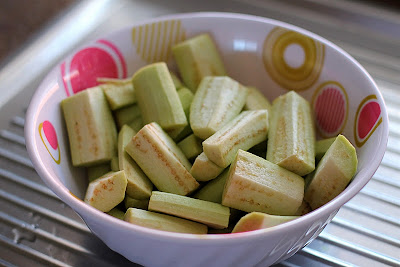 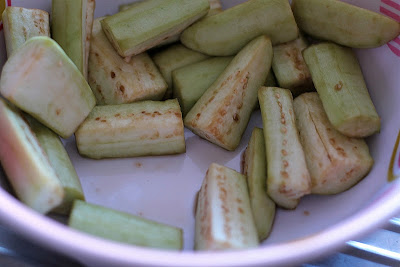 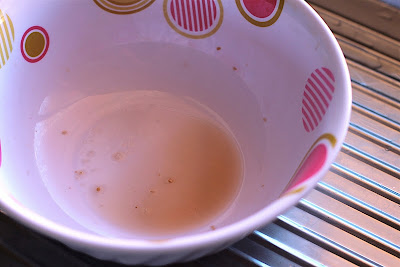 I have learnt that eggplants are a vegetable which needs to be fully cooked through in order to develop a rich sweet flavour. I love when it gets to that meltingly soft stage, when it just collapses in your mouth as you eat it. When eggplants are undercooked, I find that it has a bitter taste and it is not as pleasant to eat. 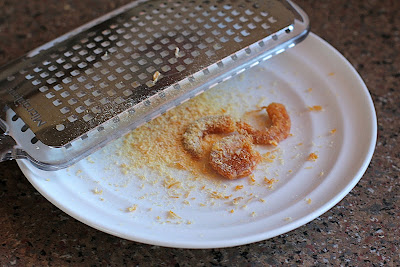 Peel and slice up the eggplant into 3-4cm lengths and in quarters lengthwise, place into a large bowl. Sprinkle the eggplant with salt and let stand for 30 minutes or more, pat dry (you can rinse off any excess salt if you like).

Grill or pan fry the eggplant until charred and soft. Set aside. 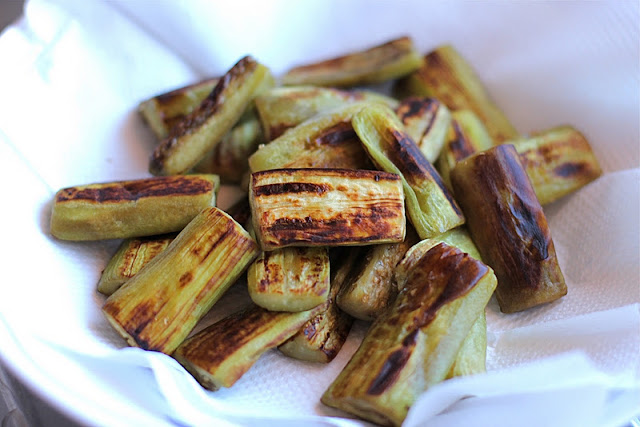 Heat up a wok and fry the chicken with garlic until brown. Add in the shallots, chilli and prawns, and stir fry until the prawns are nearly cooked. Then add in the eggplants and fry everything together. Turn off the heat and add in a pinch of sugar, fish sauce and lime juice, toss everything together. Taste and adjust. 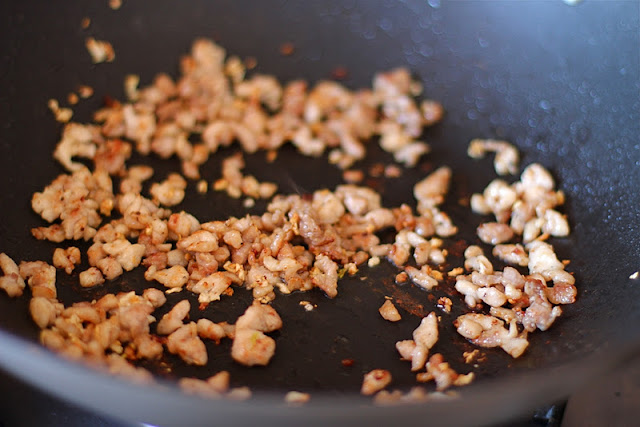 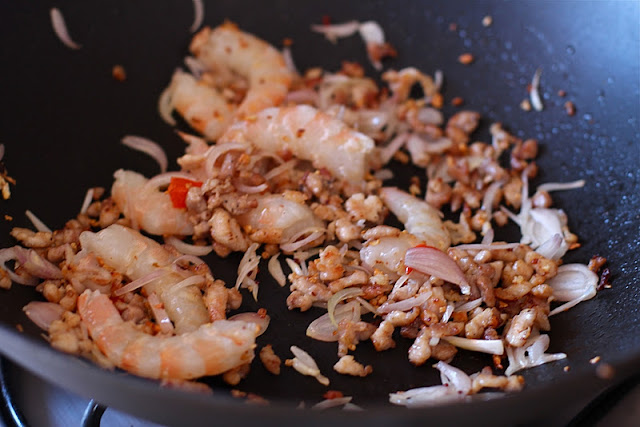 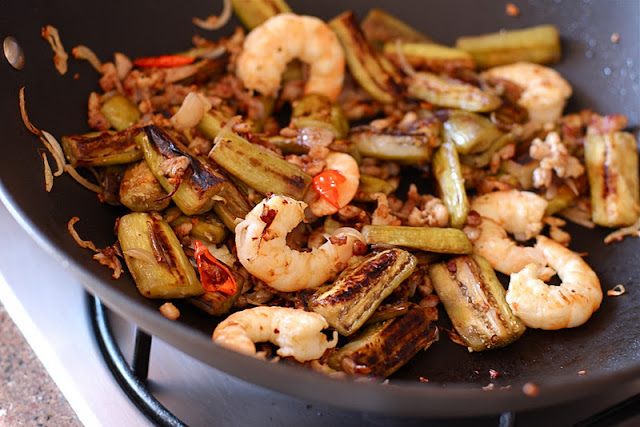 Arrange on a plate, garnish with mint and coriander, and sprinkle some ground dried shrimp over the top. 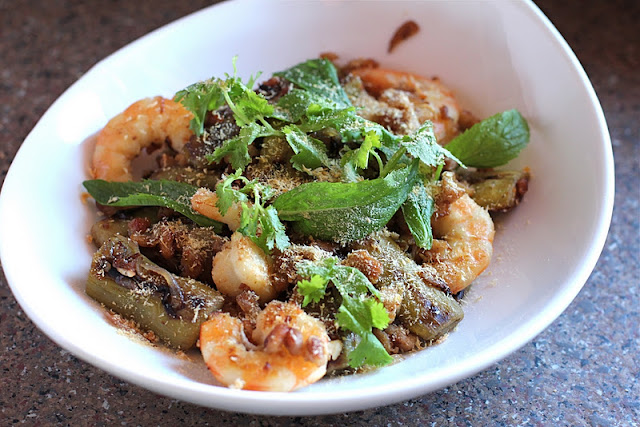