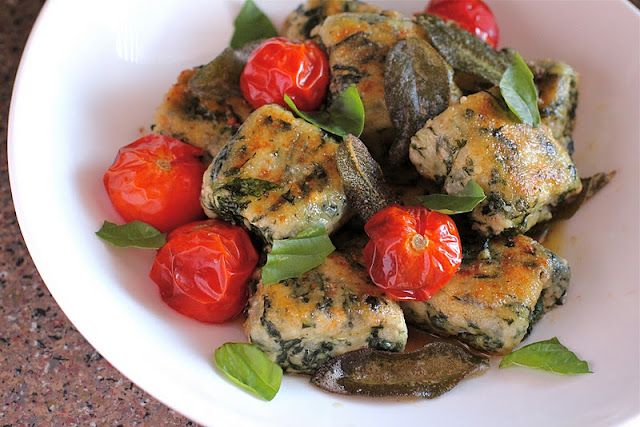 A few weeks ago, my friend invited me over to her new place for dinner. She told me that she would be serving gnocchi. My initial thought was awesome, I love eating gnocchi. Then I thought, you crazy woman, how is she going to make gnocchi after work considering the amount of time it takes? She made spinach and ricotta gnocchi. I watched her prepare it, rolling and shaping the pieces of gnocchi, and it looked quite simple and didn’t take long at all. It was totally doable as an after work dinner.

So I tried making spinach and ricotta gnocchi at home, and I found it much easier to make then potato gnocchi. Making spinach and ricotta gnocchi is less time consuming as there isn’t as much prep required for the ingredients – there is no cooking, peeling and mashing of potatoes. There are many little aspects to consider when making potato gnocchi such as the variety of potato used which should be starchy and old so that it has a lower water content, and it’s important that the potatoes are not overcooked as it will absorb too much water and require more flour to make it stick together, resulting in a heavier outcome which goes against what a gnocchi should be. With spinach and ricotta gnocchi, you just have to mix all the ingredients until it comes together, unlike potato gnocchi, where you are required to gently knead until it forms a dough and stress about not overworking the dough.

I combined all the ingredients for the spinach and ricotta gnocchi dough and rolled out half of it to cook for dinner one night and refrigerated the leftovers to cook the next night (I put all the leftovers in a smaller bowl and covered the surface tightly with glad wrap, so that the glad wrap rests directly on the surface of the dough). So from my experience, if you want something that can be quickly prepared for dinner, it is ok to make the spinach and ricotta gnocchi dough before work in the morning (it doesn’t take too long to mix together the ingredients) or the night before. The dough can be refrigerated hours ahead until ready to cook.

I enjoy eating gnocchi that has been lightly pan fried so that the exterior is slightly crisp and golden brown, while the interior is light and fluffy. So I fried the gnocchi and served it with a simple, rich and savoury brown butter and sage sauce.

Preheat oven to 200C. Line a baking tray with greaseproof paper. Place the cherry tomatoes on the tray and roast for around 20 minutes until they start to collapse.

Remove the excess moisture from the ricotta by putting the ricotta in a cheese cloth/muslin cloth and wringing out the liquid from it. 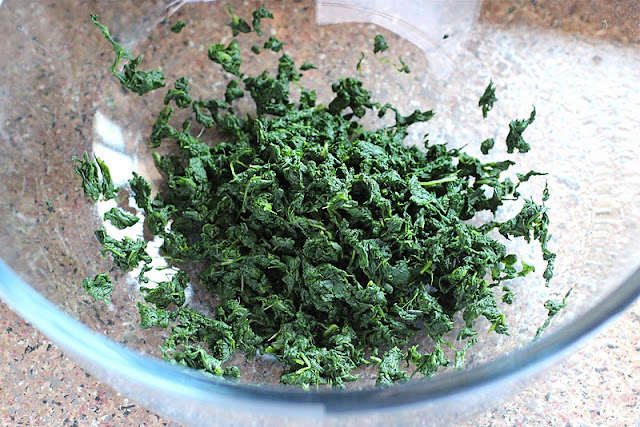 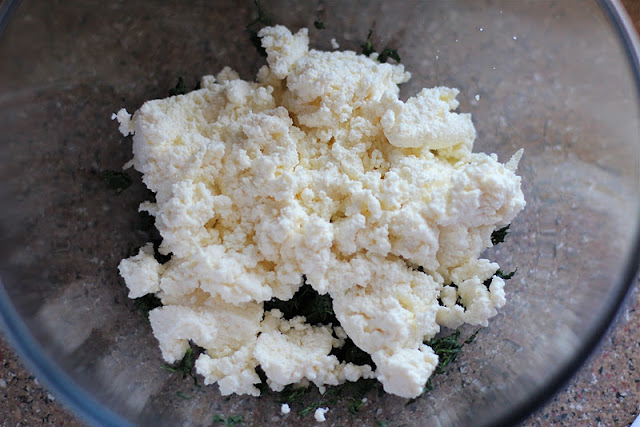 Place the spinach, ricotta, parmesan, flour, egg yolks and a pinch of salt, pepper and nutmeg to taste in a bowl, and mix together until well combined. 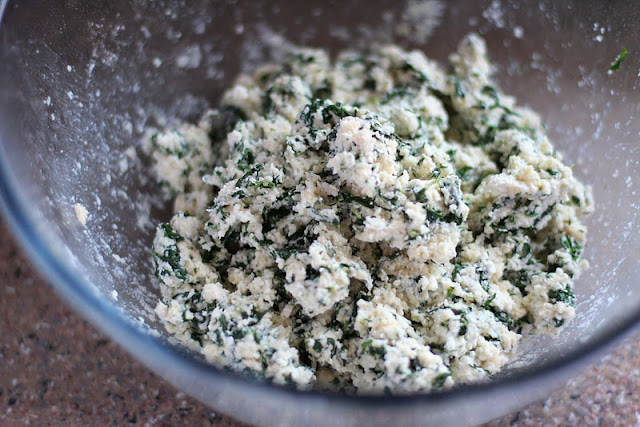 Cover the bowl with glad wrap and refrigerate the mixture for 30-60 minutes.

Lightly flour work surface and divide the gnocchi dough into 4 portions. Roll each portion into a 2 cm log and using a lightly floured knife, cut the logs into 2-3 cm pieces and dust with flour (you can prepare the gnocchi pieces ahead of time, placed on a tray with greaseproof paper, cover with glad wrap and refrigerate until ready to cook). 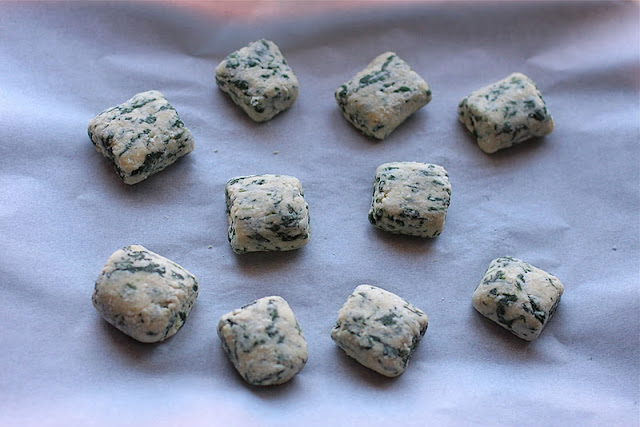 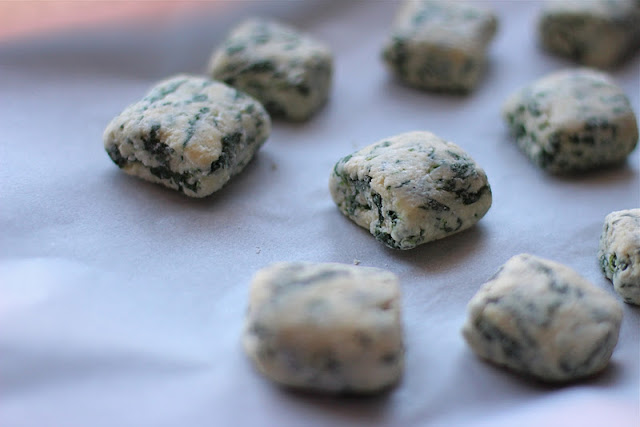 Drop the gnocchi in a large pot of salted boiling water and cook for around 3-4 minutes or until it rises to the surface. Using a slotted spoon, remove the gnocchi and transfer onto a plate lined with paper towels. 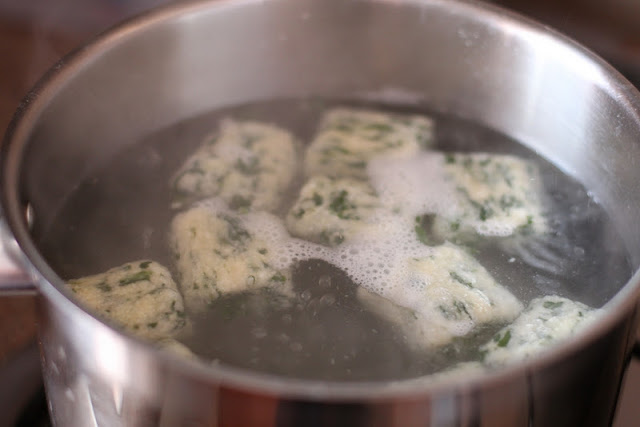 Make brown butter and sage sauce – Add butter to a frying pan and turn on the heat to medium, melt the butter until it has browned slightly. Add in the sage leaves and cook until they are crisp (this will only take a few seconds). Add in gnocchi (a batch at a time so that the pan is not overcrowded) and cook for 2-3 minutes, turning until the outside is golden brown. Transfer the gnocchi onto a plate lined with paper towels. 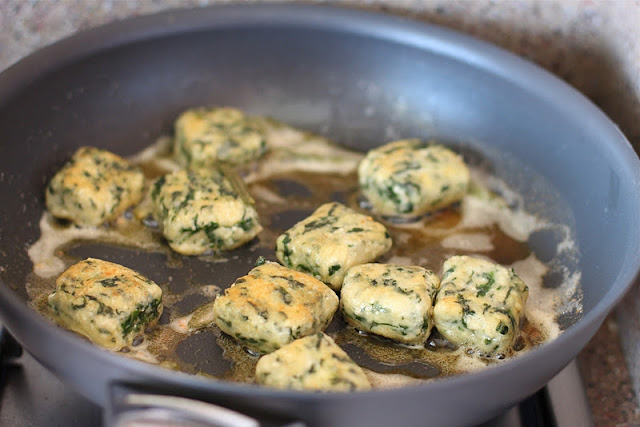 To serve – Arrange pieces of gnocchi on a plate, spoon over some brown butter sauce and a few crisp sage leaves over the top. Add a few roasted cherry tomatoes to the plate and garnish with bits of shredded basil. 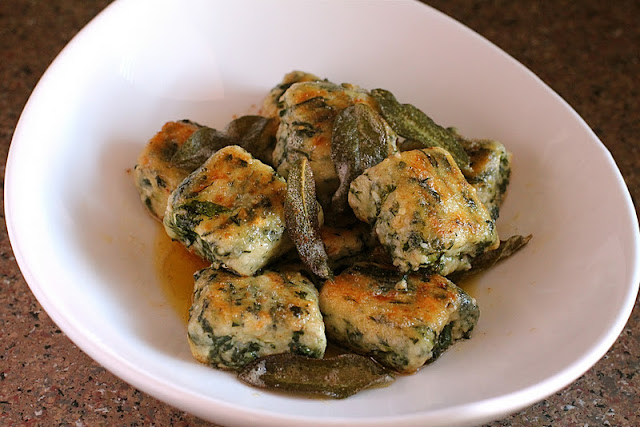 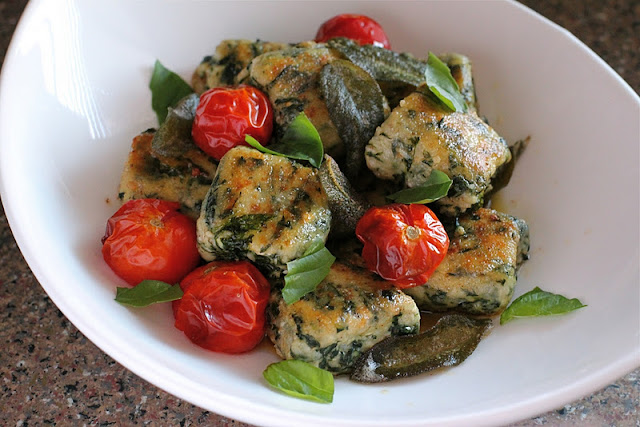 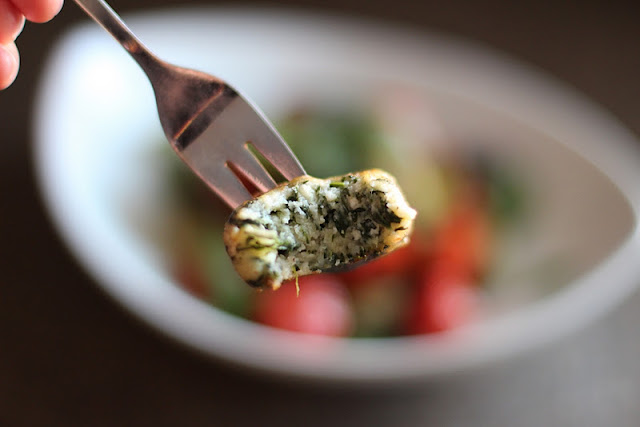 Posted by Blue Apocalypse at 12:24 PM