When events for Eat Drink Perth 2011 started popping up on the Show Me Perth website, the one that excited me the most was The Amuse Project. Last year I attended the Masterclass that Restaurant Amuse gave as a part of Eat Drink Perth 2010 and if that was any indication I knew that Restaurant Amuse were planning something very special and I wanted to be a part of the experience.


What has been significant about Eat Drink Perth 2011 has been the engagement of food bloggers by the City of Perth to tweet and blog about happenings (http://twitter.com/eatdrinkperth/perth-food-bloggers). As such, there has been a flurry of activity in the Perth food twitterverse over the past few weeks and I have found myself interacting with many bloggers that I have never met before. So I decided to organize my first tweet up to get together some of Perth’s food blogging community for The Amuse Project as it would be nice to share this event with like minded people and it would also be good to put some faces to names. With Max’s help in organizing a private room with Restaurant Amuse and a few tweets and emails later the following tweeps came together for #AmuseProjectMayhem.


The Amuse Project provided an opportunity for the head chef Troy Hadleigh to step aside for the night and let his chefs produce their own dish that they have been perfecting for months for a special degustation event for Eat Drink Perth. In the menu booklet we were informed that “each member of the team takes on a regular project, this may be a technique, a component, a cocktail or an entire dish of their choice that over the weeks is submitted on a Saturday for discussion, critique, refinement of praise”.


Amuse Project Mayhem which I coined with reference to Project Mayhem from the movie the Fight Club brought together a group of Perth food bloggers, food lovers, partners and friends united by a passion for food and the pursuit of gastronomic experiences.  But I can assure you that Amuse Project Mayhem was a much more civilized affair. It was pointed out by someone that with a degustation everyone gets their own plate of exactly the same dish, thus each food blogger could take their time photographing dishes while others could enjoy their dishes without the usual interruptions. 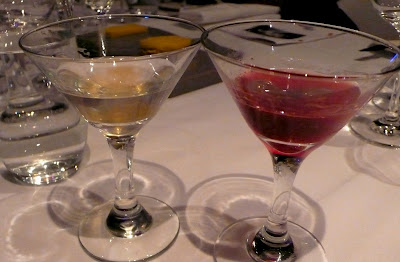 The night started with some cocktails (cherry ripe and dirty jelly martinis) and canapés. The canapés included oat and pumpkin crisps, a 30 second olive sponge with goats cheese on top, lamb tartare and watermelon cups. 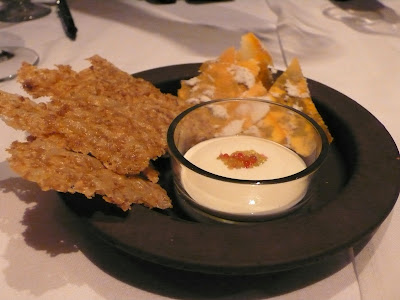 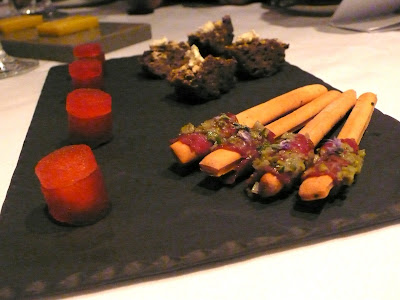 After the canapés we were presented with some bread kept warm on hot rocks. Whilst the bread and butter can be overlooked amongst the six course degustation that was about to be rolled out to us, the simple pleasure of consuming some fresh hot bread with beautifully cultured butter cannot be underestimated. For some of the people sitting around me, they could happily spend the whole night eating the bread with butter. 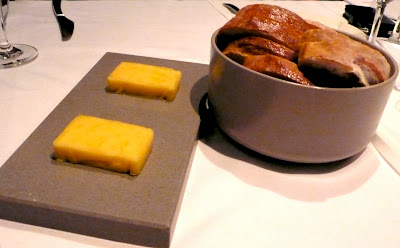 My favourite dishes of the night were the first two courses - ‘Nordic Kingfish’ and ‘Pig, mushroom, onion’. 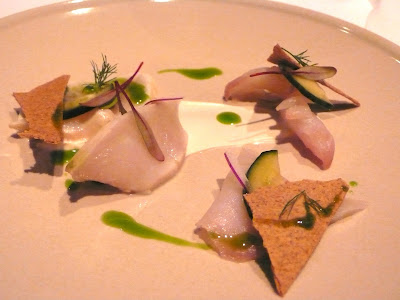 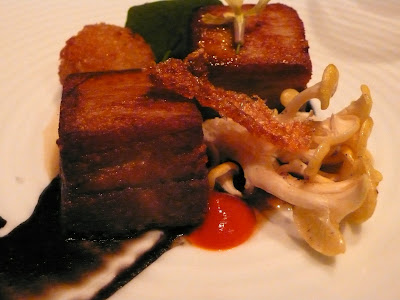 The Nordic Kingfish dish contained thin slices of fish that had been prepared in two ways – slightly pickled and slightly smoked. I appreciated the light and subtle flavours of the fish which was married well with some cream, dill oil and dill. The dish showcased the natural flavours of the ingredients used. I also thought that it was the most beautiful looking dish of the night, there was a gracefulness with the way that everything was put on the plate and the vibrant contrasts of green and purple against the pearly white and rosy flesh of the fish was pleasing to the eye.


I have to confess that I love eating pork belly so being presented with a pork dish was always going to be a winner with me. The two cubes of pork belly were lovely and tender with nice layers of fat and lightly crisp on the outside. The pork was coupled with a lovely mushroom, onion sauce with a small dollop of capsicum on the side and a small fried onion ball. A pork dish would not be complete without some crackling. A small piece of pork skin was placed on top of the pork, it was thin and had a crisp and crunchy texture. All the flavours on this dish worked together well making it rewarding to eat. It’s one of those dishes where you would have loved to of had more of each element - some more cubes of pork belly, more pieces of crackling and a few more onion balls. However, the small portions of each component of the dish allowed for a careful appreciation of the different elements as you are left savouring the memory of what was consumed with the knowledge that you will not get anymore and if more was provided its effect may be lost 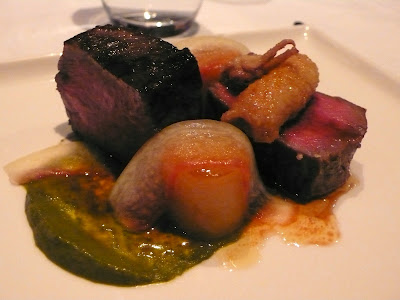 The third course was centered on beef cooked sous vide style and then slightly seared on the outside. From my masterclass with Restaurant Amuse last year I knew that this was a method that the restaurant often used for cooking meats. Sous vide enables an ideal medium rare to be reached and results in meat that is succulent. However, one of my friends thought that the beef lacked flavour. This is one of the downsides of low temperature cooking, it doesn’t create the rich, meaty, savoury flavours that we typically associate with beef as most of us would usually have it cooked using high temperature methods such as frying, grilling or roasting. The lack of strong browned beef aromas may have reduced the flavour intensity of the beef but I think that in the scheme of things it works well as the beef was accompanied with a salsa verde which we later learned contained 20 mystery ingredients, slivers of pickled watermelon, small cylinder cubes of potato, and a single piece of perfectly seasoned and cooked squid. The use of sous vide allowed the natural flavour of the beef to present itself but it didn’t dominate the dish, and enabled the other flavours on the dish to shine through and provide different tastes and added levels of complexity. If the beef has been cooked in another way using a high temperature method it may have been too imposing upon the other flavours.


The desserts ended the night with a bang taking a leaf from molecular gastronomy with the use of liquid nitrogen which enthralled the diners as we cracked into and shattered the coconut juice sphere that encapsulated pineapple sorbet for the Coconut on the beach. The first dessert course was cleansing, full of fizz and contrasting textures. The flavour combination of coconut and pineapple was complementary. 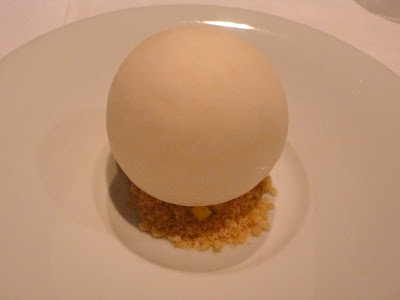 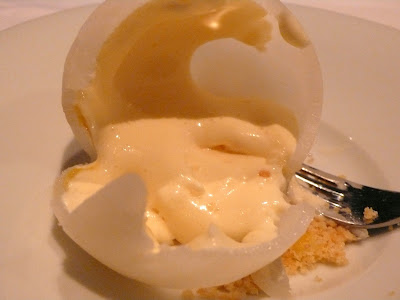 The second dessert brought us back to earth with multiple textures and layers of chocolate, and hits of beetroot here and there. We watched in amazement as liquid nitrogen white chocolate ice cream was individually spooned onto our plates with plumes of vapour descending onto our plates. Beetroot and chocolate may seem like a weird combination but they have an established affinity with each other where the sweet earthiness of beetroots balances the bitterness of chocolate. You couldn’t really taste the beetroot on the dish, it was there to emphasize the presence of the chocolate flavours and I really enjoyed this dish. 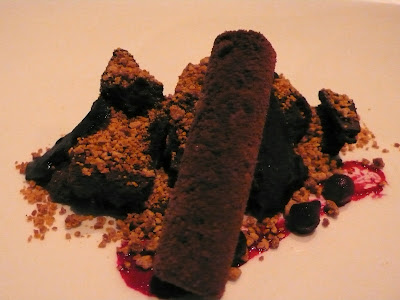 After desserts we were presented which a cheese platter. 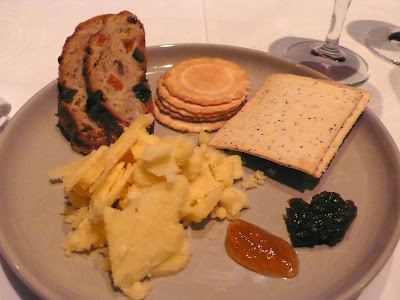 Each course was matched with wine, I’m not much of a wine connoisseur but I enjoyed all the wines that were paired with the dishes. My favourites were the Domaine Lucci, 2010 Petit Verdot which was served with the Beef, squid and watermelon dish and the Marcarini, 2009 Moscato d’Asti which accompanied Coconut on a beach. The sommelier Samuel Davies did an excellent job of delivering the wine and explaining how it complemented the dishes we were served.  While introducing the Domaine Lucci, he told us that all the labels are designed by the wine makers daughter which gives the labels a distinctive character. 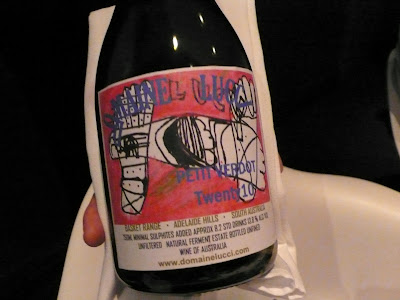 Thanks to Restaurant Amuse for providing an avenue for the staff to showcase their own creations, it was a great concept and I hope that they will do it again.


Thanks also to all the tweeps that joined #AmuseProjectMayhem making it a night to remember not just for the food but for the company and conversations as well.


Check out other food bloggers accounts of the night.

Posted by Blue Apocalypse at 8:10 AM