One of the most interesting events on offer for Eat Drink Perth 2011  is a pho eating competition every Wednesday night in March between 6:30pm and 7:30pm at What the Pho Vietnamese Restaurant on 57 Aberdeen Street, Northbridge.


“Order a delicious jumbo sized Pho and if you finish everything in the bowl, you’ll get it on the house! You’ll also win a meal voucher. Put your pedal to the noodle!”

I am unaware of any eating competitions that have previously occurred in Perth, although I have been told that some chicken leg eating competition is offered at one of the restaurants in Chinatown at some point in the year? (If anyone has any further information about this, I would like to know).


I love eating pho. Pho (pronounced "phuurh" - see Loving Pho's article on how to pronounce pho) is a Vietnamese rice noodle soup with a clear beef broth, garnished with beef meat balls, sliced beef brisket, sliced raw beef, sliced red onion, bean sprouts, mint/basil leaves, chillies and a wedge of lemon. I find it a really hearty meal. Think of a real hearty chicken soup which is a classic comfort food. Pho to me is like chicken soup.


I wanted to witness the pho eating competition in action but I wasn’t sure if I would be game enough to take on the challenge.


A few weeks into March my curiosity over whether if anyone had attempted this pho eating challenge led me to tweet the question.

I received some replies from other food bloggers expressing some interest in taking on the pho challenge. So a date was set for any food bloggers who wanted to attempt the pho eating competition or provide some moral support to contestants.


In the lead up to the pho eating competition on Wedneday 16 March #phoshiz was trending on twitter. 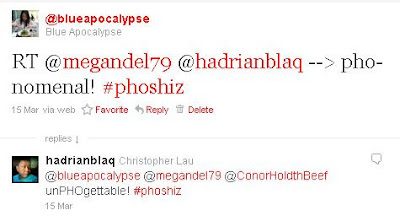 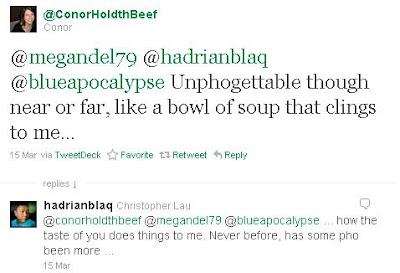 I initially expressed that my presence at What the Pho would be to provide moral support and high fives for my fellow brave food bloggers who had decided to take on the challenge and had spent the whole day physically and mentally preparing themselves for the phofest.


But when I got to What the Pho and met Conor@HoldtheBeef and Chris@BonViveur, I decided to get into the spirit and also attempt to eat my way through a jumbo pho.


The first thing we were presented with was a contract to sign and to our surprise we discovered that we only had 20 minutes to consume the jumbo pho. We originally thought that we had an hour to complete the challenge! 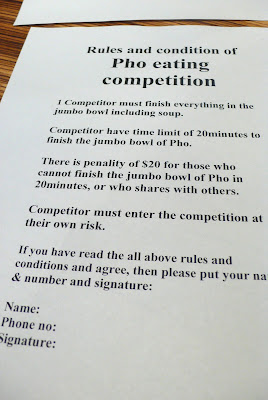 Conor is not a fan of beef and requested a bowl that wouldn’t have the beef broth or beef toppings. The waitress advised that it may be possible to substitute with chicken and pork broth but she needed to check with the kitchen first.  She then came back to advise that there wasn’t enough chicken and pork stock to make up a jumbo bowl. However, with a bit of negotiation and some compromise, the staff were able to accommodate a jumbo bowl of noodle soup with as much chicken and pork stock as possible, and then topped off with some beef broth and pieces of chicken. Conor got a special jumbo sized non-beef pho. As such, she couldn’t officially compete in the pho eating competition but she still observed the rules and conditions.


Waiting for our bowls of pho to come out we observed how busy the restaurant was and that there were quite a few people taking on the pho challenge.


It appeared that Perth was really embracing this competition and many had come down to take on the jumbo pho. 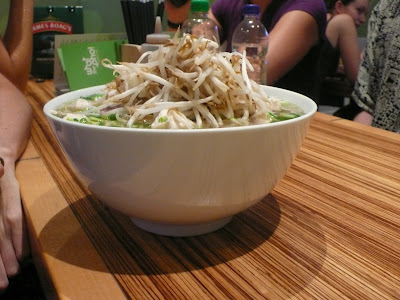 When our jumbo bowls came out, the challenge ahead dawned on us that we would have to somehow get through around 900g of noodles, soup and all (the equivalent of around 3 servings of pho) within 20 minutes. The curse of a food blogger is that valuable eating time was spent taking photos of the jumbo pho with various items used to show the enormity of the challenge. 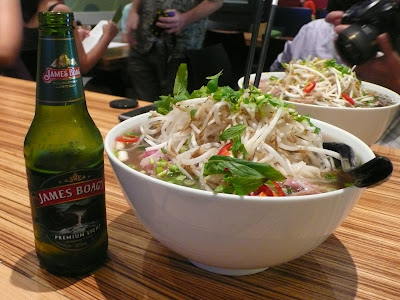 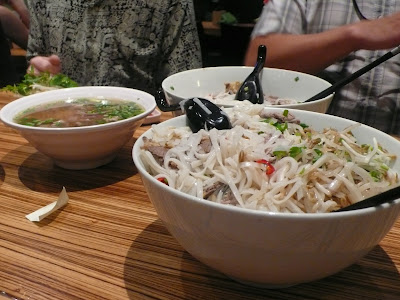 
The taste of the pho wasn’t the best that I have had but it wasn’t too bad either. I would definitely come back to have a proper taste of the normal sized pho in the future. The jumbo pho is a different beast. 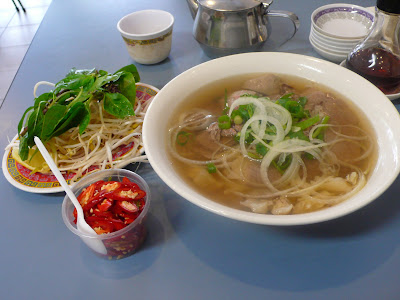 (This is how a normal pho looks)


The soul of the pho is the aromatic broth, so normally when you eat pho there is a good balance of broth to noodles. The broth usually drowns out the noddles but with the jumbo sized pho this balance was turned around with the amount of noodles overwhelming the broth. The jumbo bowl was pretty much all noodle topped up with some broth. So as you are eating, the broth will disappear as it gets soaked up by the noodles and you are pretty much just chugging your way through noodles and the dish will start to loose flavour.


But the reality was that this was an eating competition, this is a sport about consuming large quantities of food in a short time period, and not so much about the taste and enjoyment of food.


After 20 minutes we admitted defeat and compared our bowls. 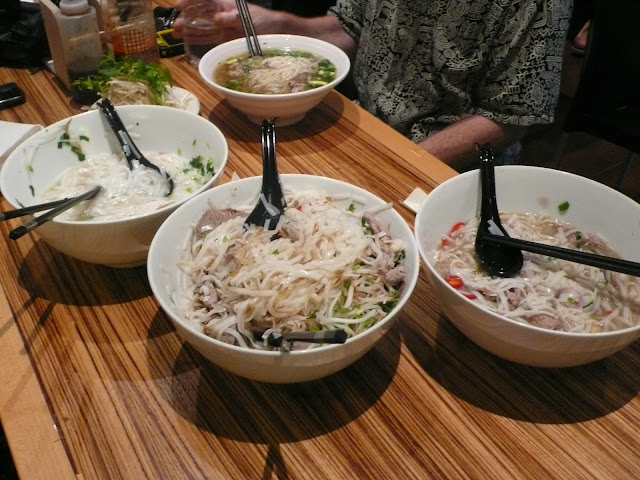 
Overall, Conor achieved the best result, Chris also put in a great effort and my bowl was not to be talked about as it could be argued that I hadn’t actually tackled the pho (I swear that I had tried my best!)

Here are my pho before and after shots 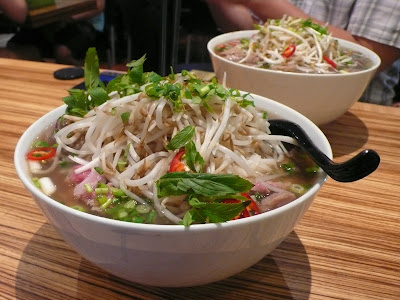 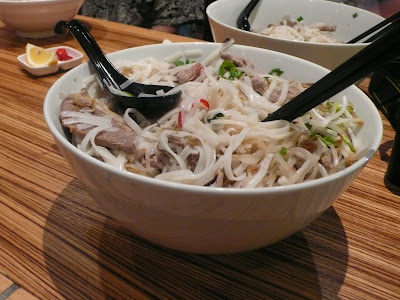 Matt@abstractgourmet rocked up later on in the evening to take on the pho challenge. Matt was quite confident of getting through and psyched himself up by telling us stories of the time when he had multiple degustations in one day. Consuming a lot of food was not an issue but food should be enjoyed at a leisurely pace – an eating competition takes that joy of food away. Matt also couldn’t get through the jumbo pho within the 20 minute limit.


Although we had all being defeated by the jumbo pho, we were not defeated in spirit as we all had a really fun night together as we cheered each other on.


That night three people managed to put their pedal to the noodle and finish the jumbo pho within 20 minutes. It was a very triumph affair as everyone in the restaurant would stop and take the time to acknowledge and applaud the accomplishments of the very few.


Thanks to What the Pho for bring some competitive eating into Perth. It had been an enjoyable experience. If you feel up for the challenge or just some good old ridiculous fun, get some friends together and make date with a bowl of jumbo pho on Wednesday the 24th or 31st of March. There are two more weeks left for you to put your pedal to the noodle.

Posted by Blue Apocalypse at 10:24 AM