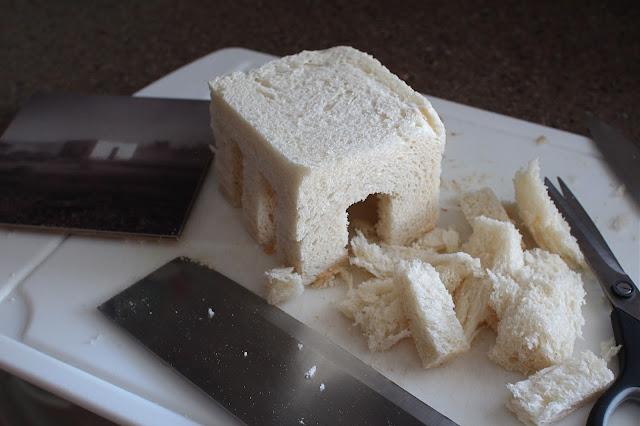 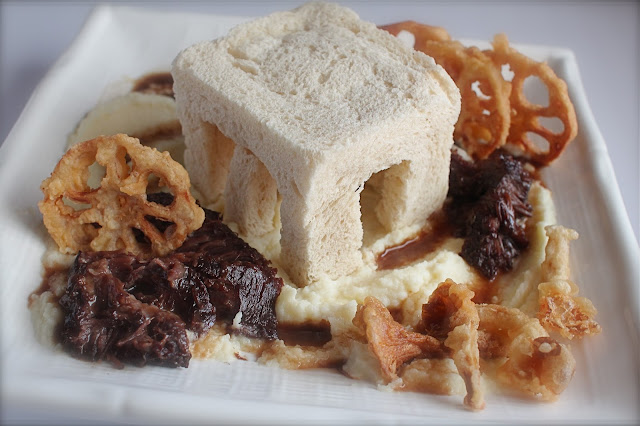 I used to think that music needed to have lyrics in order for it to have meaning, but I developed an appreciation for instrumental music through listening to post rock and found that you don’t need words to express something.

The emergence of post rock (gaining prominence in the late 1990s and early 2000s) has been viewed as a reaction against rock music, particularly the mainstream's commercialisation and co-opting of alternative rock, where it had became formulaic and ceased to mean anything anymore. Post rock subverts and rejects typical rock conventions, breaking away from standard song formulas and the ‘macho’ aesthetic. It’s generally instrumental and has been described as music “using rock instrumentation for non-rock purposes, using guitars as facilitators of timbre and textures rather than riffs and power chords”.

Texture, tone and atmosphere have more of a prominent role in post rock than hooks, verses and choruses. With the absence of vocals, the music itself becomes the primary focus and supplants lyrics in engaging listeners. When vocals are used in post rock, it’s an extension of the instrumentation, adding texture and melody to the overall song. Take a band like Sigor Ros for instance, where songs are sung in an ethereal falsetto, in an ‘invented language’ Vonlenska, also known as Hopelandic, which acts as another instrument to drive the sound of Sigor Ros. The musical qualities of the vocals are absorbed, not its meaning.

To me this is the beauty of post rock, where the interplay and dynamics between the instruments create a song that can bring up feelings, images and experiences that have the ability to transport you somewhere for the time you are listening to the song. There is something truly mesmerizing about music that leaves a mark on you without the use of words.

Slow braising is my favourite way of cooking meat. Nothing beats the taste and texture of meat that has been cooked for so long that it falls apart and literally melts in your mouth. Braising also brings out an incredible depth of flavour in the meat as overtime it is slowly infused with the flavours of all the other ingredients.

In On Food and Cooking, McGee looks at how the quality of meat and our approach to cooking it has changed over the last few decades due to the mass industrialized production of meat, driven by efficiency and affordability. Meat has become immature in that it is grown and slaughtered in the shortest possible time. Movement is minimized, the muscles are not worked, resulting in more tender meat with flavour that is not as developed. The required cooking time for modern industrially produced meat is shorter and the packaged cuts you get at the supermarket are generally leaner and based on ease of preparation (ie: fast).

Back in the day, animals led a full life - kept for work to plough the fields and as a mode of transport etc. and were slaughtered for food after they had outlived their usefulness. This meant that meat was mature, tough and strongly flavoured, and slow cooking was used to soften and tenderize tough cuts of meat. People used to spend hours cooking!

These days people are cooking less often as their lives are busier, the rise of two-income households can mean that neither partner has the time or energy to cook. There is a growing ‘cheaper, faster trend’ with a number of shortcuts, premade meals, packet seasonings to make meals easier and quicker to prepare. 30 minutes. 15 minute meals. 5 ingredients, 4 ingredients recipes. How much less time can do you want to spend in the kitchen? How minimal can your meal be?

This is something that Michael Pollen explores in his recent book Cooked, where he believes that the art of cooking is being lost, and lack of time spent on cooking is also resulting in us loosing connections with our food and understanding of it, as well as the connections to the people that we share food with and our lives. One factor that he attributes this development to is the rise of convenience food in the growing post World War II industrial food system, where food corporations are increasingly promoting packaged food products as quick and easy food solutions to the domestic market, especially as housewives and women were moving into the workforce.

Cooking, if you want to do it justice, can be time consuming. An example that Pollan uses is onions, where he admits to never giving onions enough time. If you want to get beautifully caramelized onions, you need to be cooking, sweating them, stirring and waiting 40 minutes for it. Who has the time to wait more than 10 minutes for onions to cook? It’s easy to be impatient. But then Pollan lets himself ‘be’ in the kitchen, to be disconnected from his computer screens and take the time to connect with his senses and family while cooking. The more Pollan cooked, the more he changed his outlook to it. Cooking is time-consuming, it requires you attention and effort, it’s varied, challenging and highly rewarding.

In the sense that our food habits are infiltrated by commercial and corporate interests, as alternative rock music has; and we live in times where we are encouraged to do things fast and furious; slow cooking, like post rock, would be taking a step back from the state of things to slow down and spend a little more time to appreciate the wonders of cooking/music and how it all comes together, to allow yourself to be lost in the method/song compositions, the textures of the sounds/ingredients and surround your senses – smell, sight, sound…. they both provide a sensory assault that is long and drawn out.

When I think about post rock, I see many similarities with slow braising.

To embrace post rock or slow braising you need time and patience.

Slow braising is done by cooking tougher cuts of meat, partially covered with liquid, slowly for a long period of time at a low temperature. Overtime, the connective tissues and fibres of the meat break down so that it pulls apart easily and the collagen melts, turning into rich liquid gelatine, giving the meat flavour, making it tender and succulent. Similar to the composition of a post rock song, slow braising is about developing and layering flavours. Typically the meat is first seared at a high temperature to brown and caramelize it, causing the Maillard reaction. Then some or all of the following things can be added - various aromatics like onions, garlic, leeks, carrots and celery are sautéed, wine/liquid is added to deglaze the pan to get the tasty bits stuck on the bottom of the pan into the dish, other vegetables are added for flavour like tomatoes, then seasonings, herbs and spices, and water or broth is added to partially cover. The heat is reduced to a simmer for hours, allowing the meat to slowly braise and become tender, and for all the ingredients to slowly impart their unique flavours to the dish, adding layers of depth.

So you have to be patient when slow braising, you can’t hurry the process up, time is needed to develop flavours and make the meat tender.

Just as you have to be patient when listening to post rock, as the songs are generally lengthy instrumental pieces that layers riffs and plays with dynamics to create soundscapes that tend to evolve to a crescendo or climax. You need to give yourself time to allow the song to build up in order to appreciate how the song intricately evolves and unfolds. Most people would be used to listening to songs that don’t go any longer than 3 minutes, I love songs that go for 10 minutes!

Post rock music takes time to grow on you and a slow braised dish grows better in flavour overtime :)

Post rock music also has a cinematic quality, especially the work Godspeed You! Black Emperor. Their music is often described as a sad and beautiful soundtrack to urban decay. The compositions of their songs tell stories of destruction, plight, mourning and uprising with an underlying message of hope. The music is moving, it effectively evokes images, builds tensions and creates shifts in moods. Sometimes it feels like you have sat through a film and have been taken on a journey while listening to Godspeed You! Black Emperor. The use of visuals with 4-projector 16mm projection of films and loops at their live shows further build upon their cinematic aesthetic. 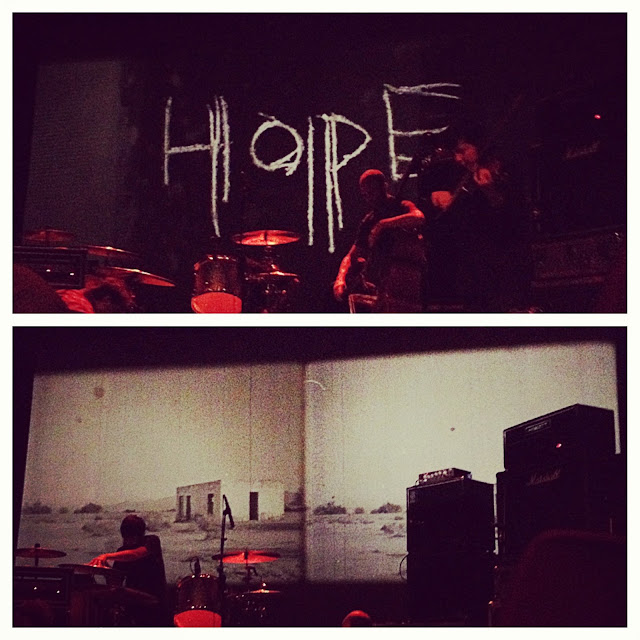 For a lot post-rock bands, films are a source of inspiration for recording music and a driving factor in the way they approach working on a record. Many post rock bands like This Will Destroy You, Godspeed You! Black Emperor and Sigor Ros have had their music featured on soundtracks or scored music for films.

I find post rock more of a soundtrack for cold winter nights and this kind of weather makes me want to braise… to set myself in a rhythm of chopping, dicing, searing, stirring, adding, seasoning and balancing, and then turn on my oven for hours. While the oven is slowing cooking my meat, breaking it down and developing layers of flavours, my kitchen is filled with warmth and I am wrapped up in lovely aromas that grows overtime as the meat reaches a state of forgivingness.

I find it comforting listening to post rock and there is nothing more comforting than tucking into a slow braised dish on a cold winters night!

Here I present to you my post rock influenced slow braised dish inspired by the cover of Allelujah! Don't Bend! Ascend! by Godspeed You! Black Emperor. 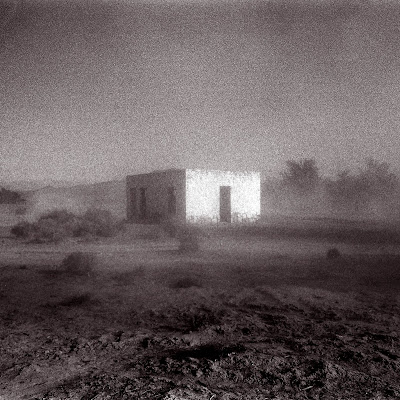 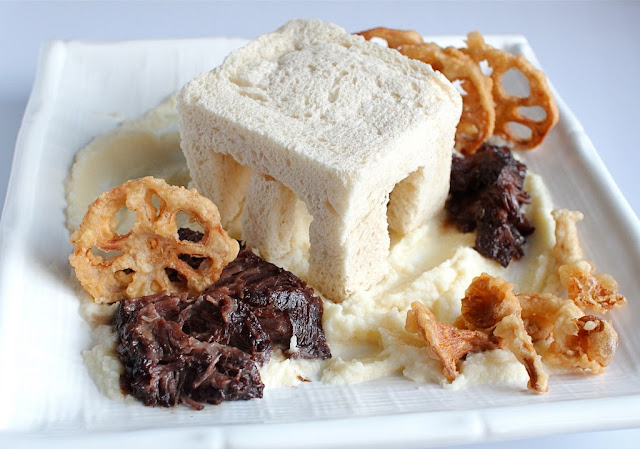 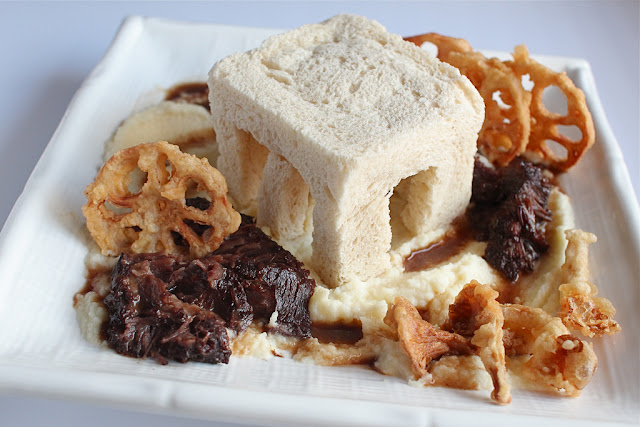 Initially I thought about replicating the cover but ended up doing my own spin on it with elements that linked to Godspeed You! Black Emperor. The dish contains the house carved out of a loaf of stale bread and then roasted in the oven at 75C until it dried out. A cauliflower and celeriac mash is rustically smeared on the plate and there is tempura oyster mushrooms and lotus roots. Tempura was included to pay homage to the fact that the band took its name Godspeed You! Black Emperor from the title of a 1976 Japanese black and white documentary which follows the exploits a Japanese biker gang, the Black Emperors ... lotus roots kind of look like motorcycle wheels right? ... 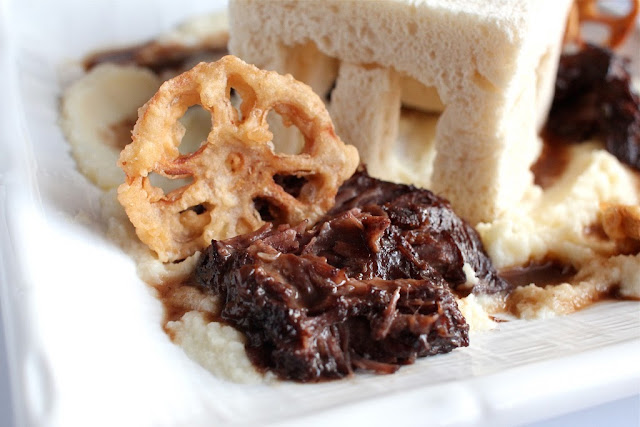 To finish the dish I sporadically scattered torn pieces of beef cheeks that I had slowly braised in my oven for 5 hours. Yes!

Heat up a little more olive oil and add carrot, garlic, leek, celery, shallots and sauté for 5 minutes until browned and caramelised.

Add thyme, bay leaf, wine and simmer to deglaze and reduce the liquid by a third.
Return the beef cheeks to the dutch oven. Bring the beef stock to boil and pour over the beef.

Cover and cook in the oven for 4-5 hours until the beef cheeks are tender and pulls apart easily.

Tempura – refer to Just One Cookbook.