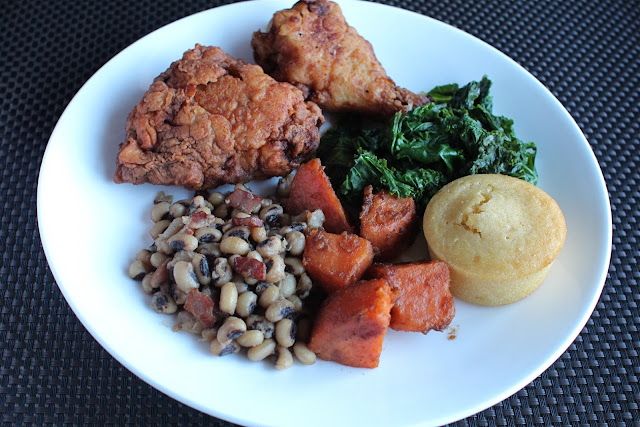 Have you ever been somewhere or maybe you are just driving along listening to the radio, and a song comes on that you instantly find yourself swinging your head and tapping your feet to? There is a distinctive energy and rhythm to the song, the emotion is raw and heartfelt, the vocals are smooth and sassy. It’s hard not to smile and sing along to the “feel good” nature of it.

There is something about soul music that touches your soul. It’s like soul food, you get a comforting feeling from it all.

This year I want to examine connections between music and food.

One of the first ideas that came up when I was brainstorming links between music and food was soul music. When thinking about soul music and food, it’s easy to think of what kind of food would go with soul music … soul food!

I did some research on soul music and soul food, and I found out how connected the two were in terms of the time of their emergence and significance to the black experience in America during the civil rights movement in the 1960s. It’s fascinating to learn how much music and food can mean to a group of people.

Soul music originated in the United States around the 1950s and early 1960s, combining elements of African American gospel music, and rhythm and blues. It became popular in the charts in the 1960s, elevated in part by the civil rights struggles of the time and enabled by the creation of channels and infrastructures run by black entrepreneurs for black artists, most notably Motown Records. This lead to a major shift in American popular music as black music achieved mainstream success and topped the charts, which played a significant role in furthering the civil rights movement by inspiring, mobilising and building the identity of black Americans, and highlighting the social issues they faced.

A song that exemplified the civil rights movement and became an anthem was “A Change is Gonna Come” by Sam Cooke. In the song Cooke expresses the hardships faced as a black man in 1960’s American society. Although it highlights discrimination and racism, it also inspires hope that a change is going to come.

The use of the term "soul food" emerged in the 1960s, with the rise of the civil rights movement during this time. As African Americans identified with each other, calling each other “soul brothers” and “soul sisters”, and listened to “soul music”, they started to refer to their food as “soul food”. Soul food originated in the home cooking of African American slaves, where using locally raised, gathered foods, discarded meat and other inexpensive ingredients, a distinctive cuisine was formed with limited means. As segregation laws prohibited African Americans from eating out at restaurants, coming together over home-cooked meals was an important part of community and belonging, as well as political organising. Some staple soul food items include cornbread, black eyed peas, Hoppin’ John, hushpuppies, collard greens, okra, ham hocks, cured and smoked hog jowl, chitterlings, candied yam and sweet potato pie.

Nowadays soul food is synonymous with dishes like macaroni and cheese, deep fried chicken, chicken and waffles, and barbecued ribs which are widely considered as comfort foods – foods with significant amounts of sugars, carbohydrates and fats! All the things that might be a little bit bad for you but hit all the right nerves in your taste buds. This food is good. When you eat this food it makes you feel better.

Music and food brings people together, and it’s better with a little soul.

I researched how to cook soul food and came up with this. 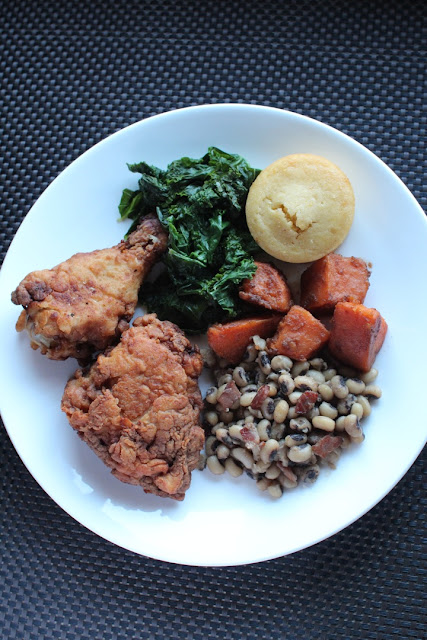 Black eyed peas? I thought they were just a hip hop group! 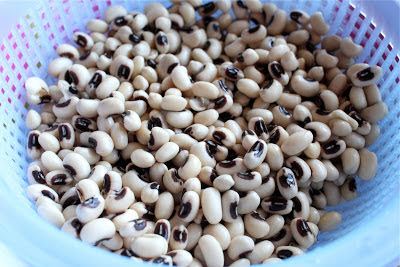 I have seen and eaten these peas before but didn’t know their name until I learnt about and cooked this soul food dish which is traditionally eaten on New Years for good luck and commonly served as a side dish. Recipes generally require simmering the peas with bacon or smoked ham hock/smoked turkey for flavouring until cooked.

Place 1 cup of dried black eye peas in a colander and rinse several times, then put the in a large bowl or pot with 2 inches of water to cover. Soak overnight. Drain and rinse.
Heat a little olive oil in a pot, add 3-4 slices of diced bacon and fry until crisp. Then add in ½ diced onion, 1 clove of crushed garlic, 1 teaspoon of chilli powder and fry until the onion has softened. Add the drained black eyed peas into the pot and enough chicken stock to cover the peas by 1 inch. Simmer the black eyed pea until tender (about 30 minutes), adding more stock as necessary so that it doesn’t dry out. Season with salt and pepper to taste before serving. 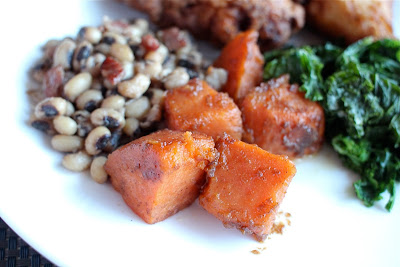 A popular soul food side dish – sweet buttery potatoes with a little spice kick. It’s very simple to cook, all you need to do is make a syrup to cover the sweet potatoes and cook (boil or roast) until they are soft.

Here’s the recipe that I put together from reading a few recipes. I cooked the sweet potatoes as I would if I was using normal potatoes and made up the syrup, tasting until I got a desired flavour.

This is for quantity of 500g of sweet potato (one large one).

In a small saucepan, melt 25g of light brown sugar, 40g of butter and 2 tablespoons of water together and simmer until the sugar has dissolved. Remove from the heat and stir in ¼ teaspoon cinnamon, ¼ teaspoon ginger, ¼ teaspoon allspice, 1/8 teaspoon of nutmeg and 1 tablespoon of lemon juice.

Pour the syrup over the sweet potatoes in the baking dish and roast in an oven preheated to 200C for 30-40 minutes. 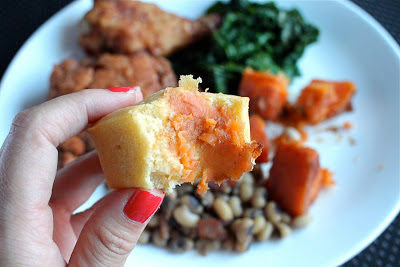 Mash some candied sweet potato on your cornbread

A typical soul food meal would not be complete without “mess o’ greens” aka collard greens.

Collard greens was a dish that evolved from African slaves getting leftover greens from plantations and unwanted parts of meat like ham hocks, pig’s feet etc. Slowly simmering the leftovers together in a large pot, a simple but delicious vegetable dish was created and formed a part of every meal.

I wanted to cook collard greens but couldn’t find any so kale was the next best thing. Any kind of bitter greens like beets or mustard is also suitable. This dish usually involves simmering the greens for 30-60 minutes over low heat but I only cooked my kale for a few minutes to maintain a freshness but it was still very flavoursome. You can also use bacon instead of a ham hock.

Wash and tear the kale into large pieces.

In a large pot, sauté ½ diced onion and 3 cloves of crushed garlic until tender. Add 3 cups of water and smoked ham hock, bring to boil, reduce heat and simmer for 20 minutes for the water to take on the smokey hammy flavour of the hock. Then add the kale and cook for a few minutes until tender, seasoning with a little salt to taste. 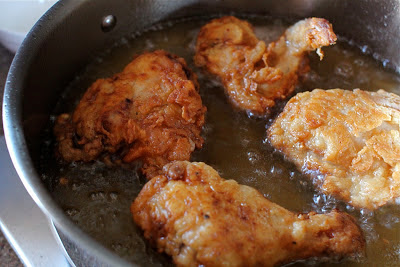 
In a bowl or rectangular pan large enough to fit all the chicken pieces in add the buttermilk, salt, pepper, chilli and paprika powder. Use a fork to mix and combine the spices with the buttermilk.

Take the marinated chicken from the refrigerator about 30 minutes before frying and leave to come to room temperature a bit.

Remove a piece of chicken from the buttermilk and dip into the milk, shaking off the excess milk. Then dip chicken into the flour mixture and shake off the excess flour. Transfer to baking sheet lined with greaseproof paper and repeat with other pieces of chicken.

Remove pieces of chicken and drain on paper towels. If desired, sprinkle over the chicken pieces a little salt. 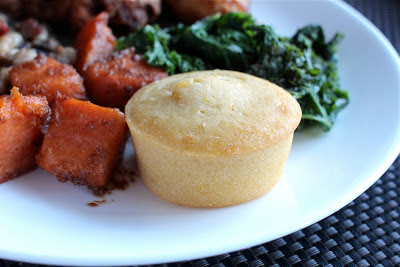 Posted by Blue Apocalypse at 7:31 AM