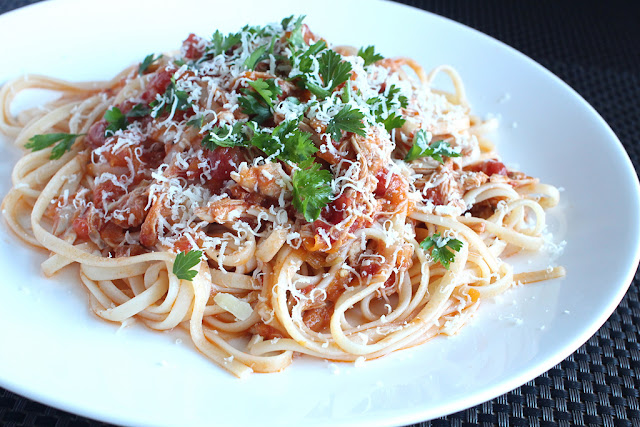 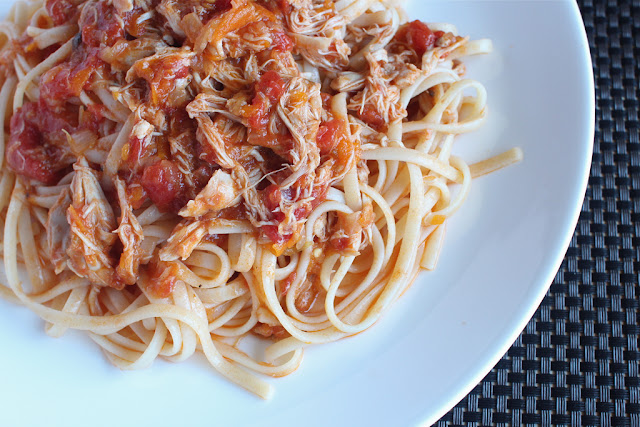 Social media has influenced the way I dine out. I like reading restaurant reviews in the paper and blogs to find out good places to eat but I also make a note of things that come up on Facebook, Twitter and Instagram. Sometimes a short simple 140 character tweet or a photo I’ve seen on Instagram can spark my interest in a place. This kind of information can be more clear and precise, without repetition or waffle, and just enough for me to know whether or not I will like a particular place.

But like traditional restaurant reviews or blogs I follow, any recommendation that I accept via social media will be based on trust, where I have judged that person to be a reliable source of information.

Last year I favourited this tweet from Pat Nourse who is the editor of Gourmet Traveller. 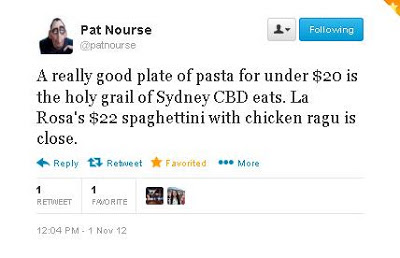 On my trip to Sydney last November to see Radiohead, I made a visit to La Rosa. I wanted to try this dish based on a tweet that I saw because a) it’s hard to find good pasta, Italian food is more bastardised than Chinese food in Australia and b) a chicken ragu? I’ve always associated ragu with red meats (pork or beef) so I was intrigued and I wanted to taste a chicken version.

I am wary of ordering chicken pasta dishes when I eat out. I’ve never eaten one that I have really liked. So many chicken pasta dishes don’t seem to work, where it feels like the chicken is there for the sake of being there but it doesn’t really blend into the dish well or contribute in a valuable manner.

I was not disappointed by the chicken ragu offered by La Rosa. The dish contained braised chicken thigh with rosemary and was generously topped with parmesan and parsley. The use of chicken meant that the dish was lighter, it didn’t have the heavy depth of flavour that you would find with pork or beef, but it still had a rich flavour where you could tell that the basis of it would have been a good chicken stock, accented with the flavours of tomatoes and rosemary throughout. What I liked about this dish was that there was a purity and simplicity to the flavour which was really satisfying and felt homey, where you can tell that it was one of those family recipes that had been passed down from generation to generation. On the menu the dish was called Spaghettini della Mamma aka Mum’s Spaghettini! It was one of my favourite dishes of the trip.

Have you ever eaten somewhere based on a tweet?

When I eat a dish that I enjoy, I like to try replicating it at home.

But first of all I had to figure out what a ragu was.

From my research, my understanding of it is that it's a meat based sauce, slowly cooked with sautéed vegetables in a liquid. The distinguishing aspect of a ragu is that the tomatoes added are limited in quantity to the meat and there is only a small amount of sauce. The sauce should cover the pasta a bit but there shouldn’t be much more. Not to be confused with the bolognese sauce variety where you drown your pasta with sauce. Also not to be confused with the French ragout which is a meat or vegetable stew.

Using my new found knowledge of how to cook a ragu where you basically sear meat, cook a soffritto and braise the meat with some liquid (wine/broth), tomatoes and herbs, I have been cooking a lot of ragu over the past few months. I started with cooking a pork ragu and then tried cooking chicken ragu, continually refining my method.

This is the third time I have cooked chicken ragu, learning from earlier attempts and tweaking the recipe overtime to a result that I am pretty happy with now. 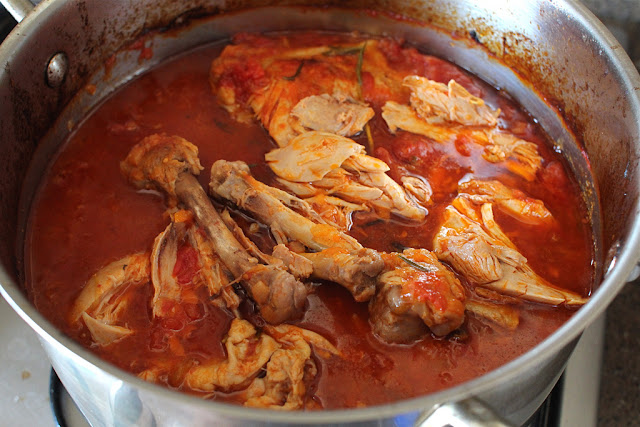 The chicken has been cooked until it is tender,
falls off the bone and is pull-apart goodness 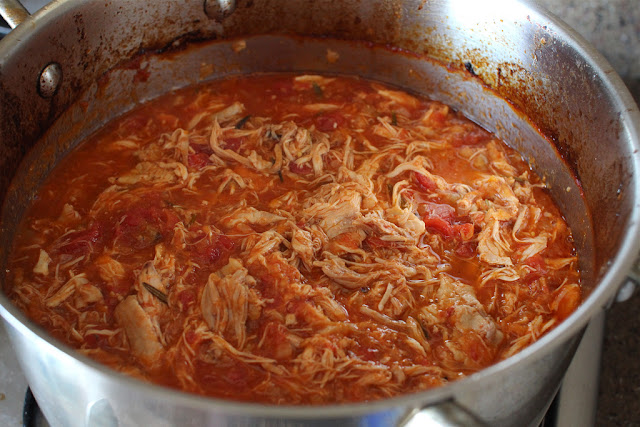 I use leftover chicken ragu to stuff some jacket potatoes :) 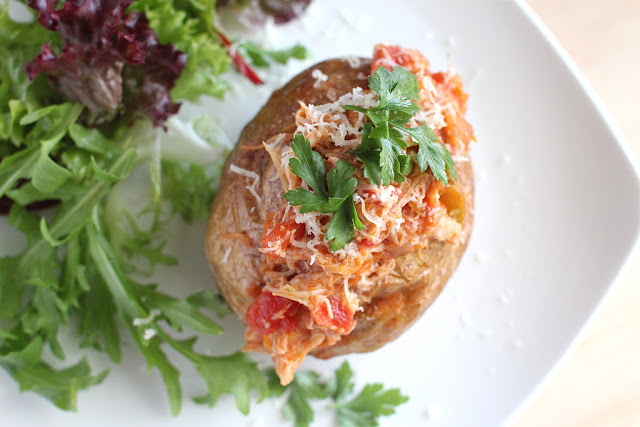 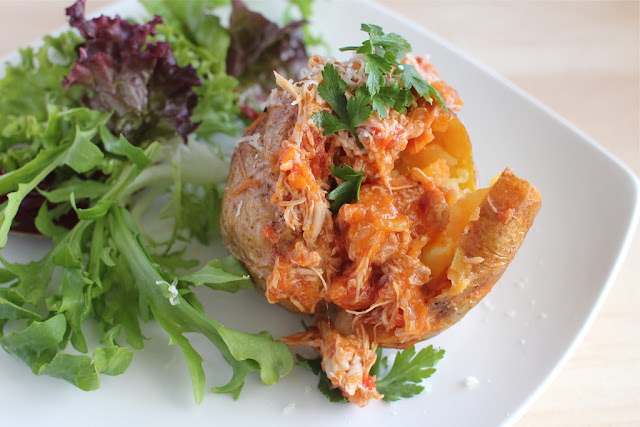 
Plus packet of dried pasta, I used linguine 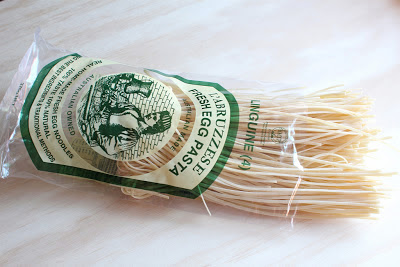 Wash, pat dry with paper towel and season the chicken Marylands with salt and pepper.

Heat some olive oil in dutch oven/overproof pot over medium high heat, add the chicken Marylands skin side down first for a few minutes and sear all over until browned (do this in two batches). Remove the chicken and set aside on a plate.

Add bay leaf, rosemary, cans of tomatoes, chicken stock and return the chicken Marylands back to the pot. Bring to boil, cover and place in the oven.

Cook for 2 hours until the meat pulls away from the bone easily. Remove the bones and shred the chicken with forks.

Put the pot on the stove and bring to boil, season to taste with salt and pepper.

Cook pasta until al dente and drain, reserving some of the pasta water. 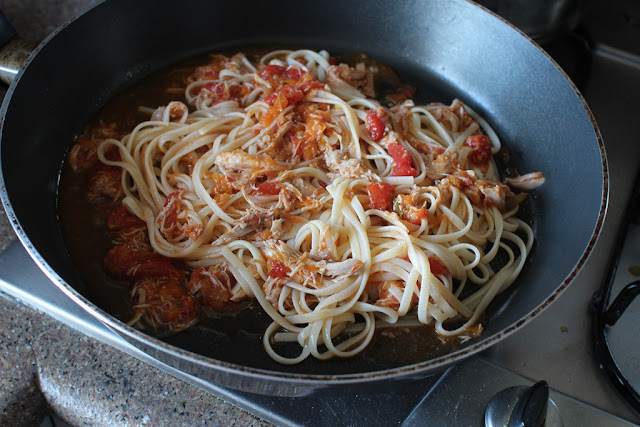 Preparing a serve of pasta

To make jacket potatoes stuffed with chicken ragu
Preheat oven to 200C. Wash a potato, wipe dry with a paper towel and then use a fork to poke some holes in it. Rub some olive oil onto the skin and some salt. Place the potato on a tray and bake for 50-60 minutes or until tender when a skewer is inserted into the centre. Cut a deep cross on top of each potato, fill with chicken ragu and garnish with some parmesan and parsley.
Posted by Blue Apocalypse at 7:06 AM