A chiffon cake is a very light and moist cake that contains vegetable oil instead of butter. Its fluffy texture is achieved by beating egg whites until stiff peaks form and folding them into the cake batter before baking.

I would describe the texture of a chiffon cake to eating a slice of very fresh white bread.

I made a pandan flavoured chiffon cake. The pandanus leaf has been described as the vanilla bean of Asia. Pandanus is used to perfume desserts and rice, its flavour released only on heating is resinous and nutty.

• Preheat oven to 175 degree celcius
• Sift the flour and baking powder together three times (this brings air into the flour and helps to create the fluffy cake texture)
• In a bowl, using a whisk, cream egg yolks and 140g of sugar until it is creamy and thick.
• Add in the sifted flour and baking powder, vanilla extract, coconut cream, vegetable oil and pandan paste into the egg yolk/sugar mixture and whisk everything well together to combine.
• In another bowl, use an electric mixer to beat egg whites on high speed. When egg whites are whisked till soft peaks form, sift in the cream of tartar and add in the salt and 60g of sugar. Continue to whisk until stiff peaks form (Note: add in the sugar one tablespoon at a time and beat thoroughly after each addition until stiff peaks are achieved).
• Fold in the egg whites into the flour/egg yolk mixture using a spatula in three batches until just combined, taking care to fold gently/lightly in order to keep volume.
• Pour mixture into an ungreased chiffon cake pan and bake for approximately 35 minutes until the cake is brown on top and an inserted skewer comes out clean.
• Remove cake from oven and invert it, leave to cool for 1-2 hours before turning out, using a knife to loosen the edges of the cake. 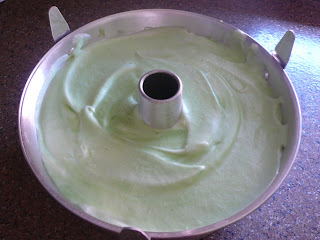 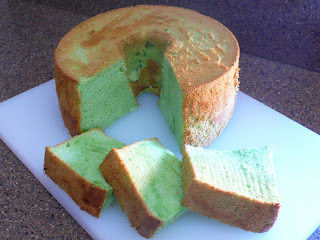 Posted by Blue Apocalypse at 8:59 AM