I find the acidic taste of lemons refreshing.

Having any type dessert/baked good with lemon in it is always a delight – lemon tart, lemon slice, lemon cheesecake, lemon custard, lemon sorbet…the list could go on.

I wanted to make some lemon cupcakes.

When I want to cook something that I haven’t made before, I will do a search for several recipes online. Then I collate all the information together to find out what the main elements of the dish are, and then adapt/create my own recipe for it.

If a dish has lemon in it – I believe that it should pack a punch! 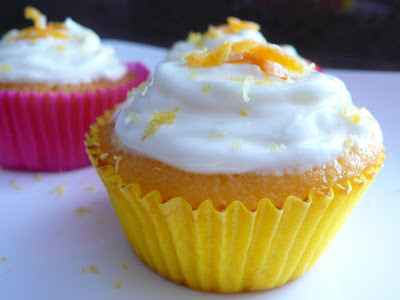 To make the cupcakes

These cupcakes require 3 eggs, separated into yolks and whites.

Preheat the oven to 180 degree celcius.

Sift 1 ¼ cup of flour, 1 teaspoon of baking powder and ½ of baking soda into a bowl.

Beat 225g of softened butter and 1 cup of caster sugar together in a bowl until smooth and fluffy.

Add in the egg yolks one at a time and beat the egg into the mixture after each addition.

Then beat in 1 ½ tablespoon of finely grated lemon zest and 2 tablespoons of freshly squeezed lemon juice.

Using a spatula, fold in the flour mixture into the butter/sugar/egg yolk mixture, alternating with some yoghurt (around 1 Cup).

Fill cupcake pans 2/3 full and bake for 15-20 minutes or until a toothpick inserted in the center comes out clean.

Side note: You cannot buy any decent yoghurt from any of the big supermarkets! There is a lack of variety and 90% of the stock is fat free or 97% fat free. I live in Highgate with a Fresh Provisions nearby in Mount Lawley and they have a fantastic range of yoghurt – full cream, organic, goats, cow, sheep’s yoghurt - the lot.

To make the lemon syrup

Put 1/3 cup of lemon syrup and 1/3 cup of freshly squeezed lemon juice in a small saucepan. Cook over low-med heat stirring occasionally until the sugar has dissolved and the syrup is clear. Remove from heat and set aside.

Beat around 125g of cream cheese in a bowl until smooth and creamy. Slowly add in some icing sugar and lemon juice until you have a thick frosting to your desired taste (I used around 1/3 cup of lemon juice and 2/3 to 1 cup of icing sugar).


To make the candied orange peels

In a small saucepan, heat ½ cup of water and ¼ cup of water over medium heat until the sugar completely dissolves. Then add in 1/3 cup of orange peels. Once the syrup gets thicker and boils with big bubbles, time it and cook for another minutes. Then take it off the heat. Using a spoon, continue stirring it, it will slowly crystallise and the syrup will become white as it goes back to sugar crystals. Keep stirring and don’t let it solidify into one big candy. Allow to cool for a few minutes and then pick out the sugared peels.

To create the cupcakes

Let the cupcakes cool and then spread the lemon cream cheese frosting over the cupcakes. Add a few pieces of candied orange peels on top and sprinkle a little lemon zest. 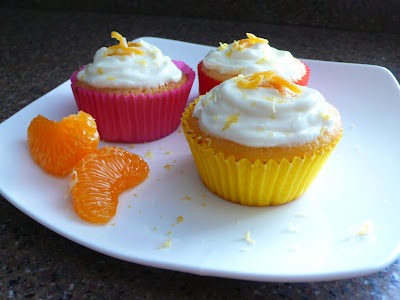 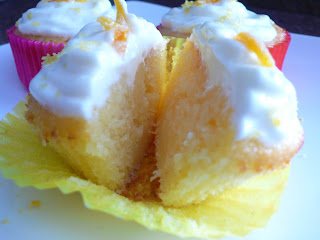 VERDICT: The cupcakes tasted amazing! The cupcakes were wonderfully moist due to the use of yoghurt. All the citrus elements were not overwhelming. I decided to add only little lemon syrup to the middle of the cupcake so that the first bite you take gives you a taste of the lovely lemon yoghurt cake and then with the second bite into the middle of the cupcake you are hit with some zing from the lemon syrup!

Third Party Approval - I made these cupcakes to take to my work morning tea and my colleagues loved them. I thought that for some people it might have been a citrus overload but the feedback that I got was that the balance was good and they tasted great!
Posted by Blue Apocalypse at 7:52 AM