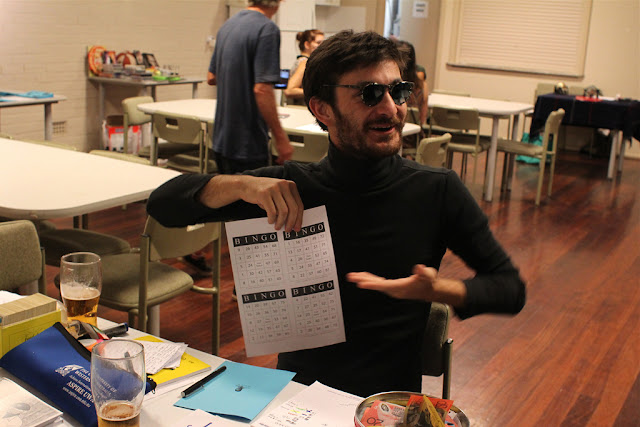 “If old people can play this so can I” said someone at our table as we settled down for a night of DINNER! BINGO! TRIVIA! at the North Perth Bowls Club last Sunday.


The night was brought together by these dudes! 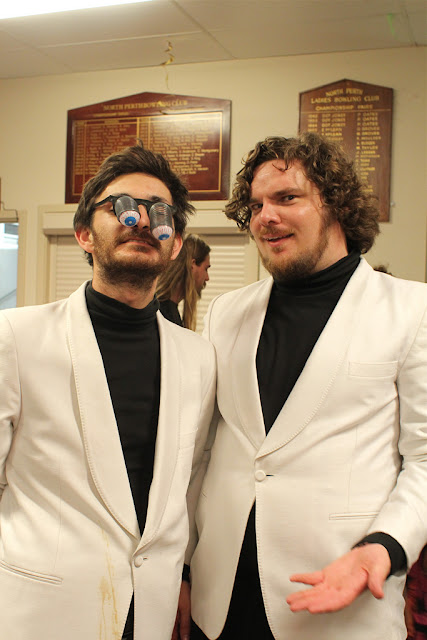 Matt and Tristan (aka Danny Cool and Bob Dinner) 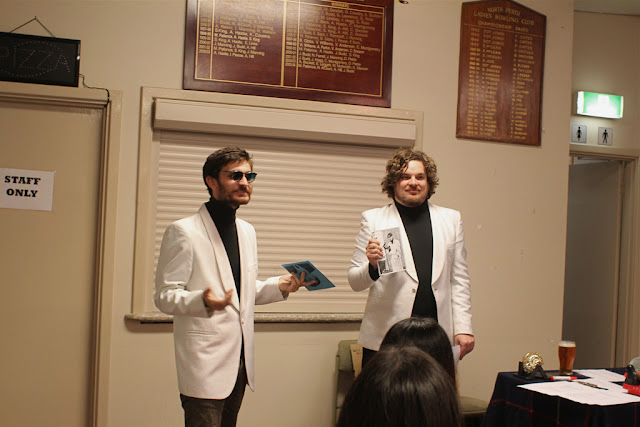 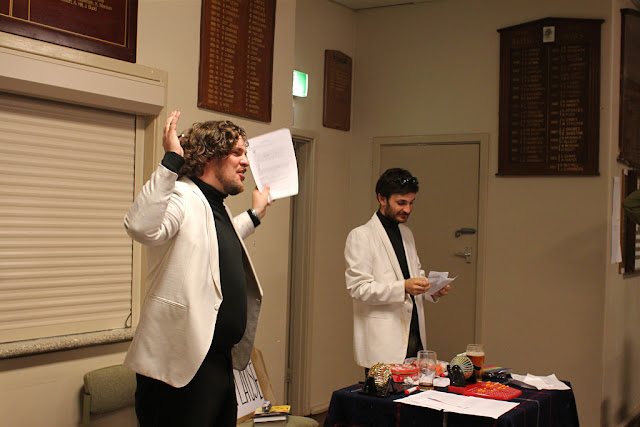 Their zines I Am Still In Yesterday’s Clothes #9: The Sports Edition! and Eggs Press #8: The Basil Zempilas Edition! combined forces for a sports themed night filled with BINGO!, trivia, ‘did Dennis Commetti say this or Kim Jong-un propositions’ and jokes like -

What lights up a soccer stadium? A soccer match.

What can you serve but never eat? A volleyball. 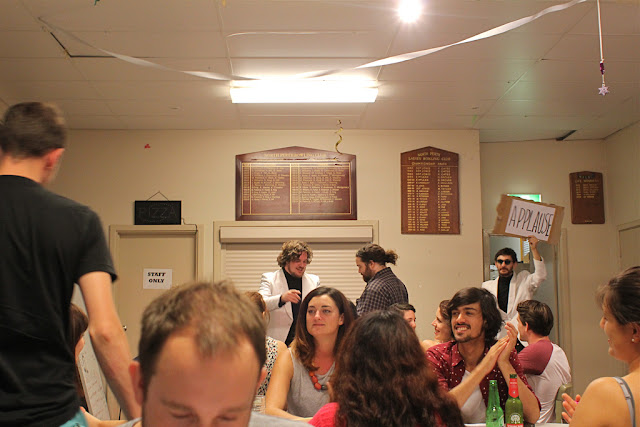 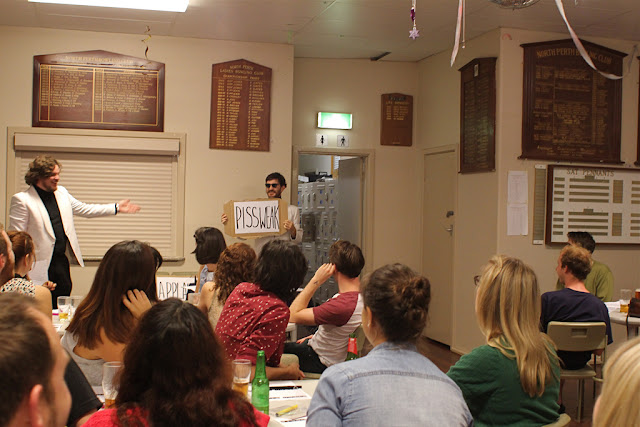 These were all the prizes available for the taking. 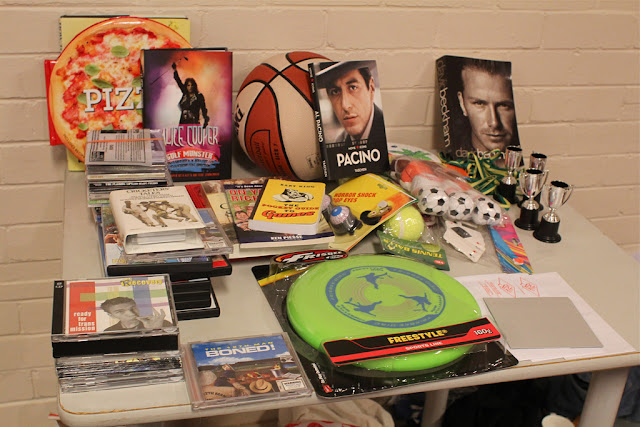 It was my first time playing bingo and I didn't win anything but as Danny Cool said at the end of the night the real winner was pos vibes. 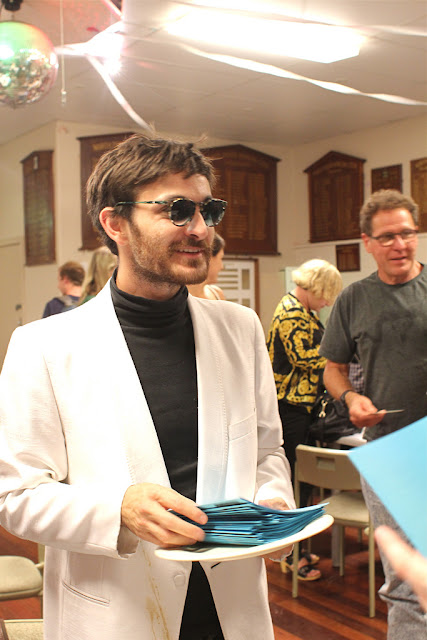 
Basil Zempilas even dropped by! 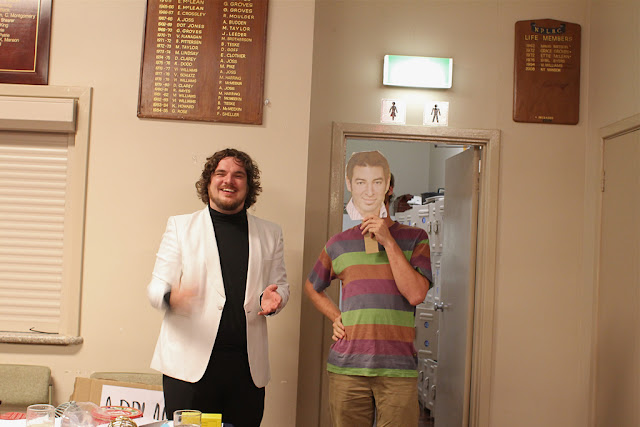 Here are some people at my table who did win prizes. 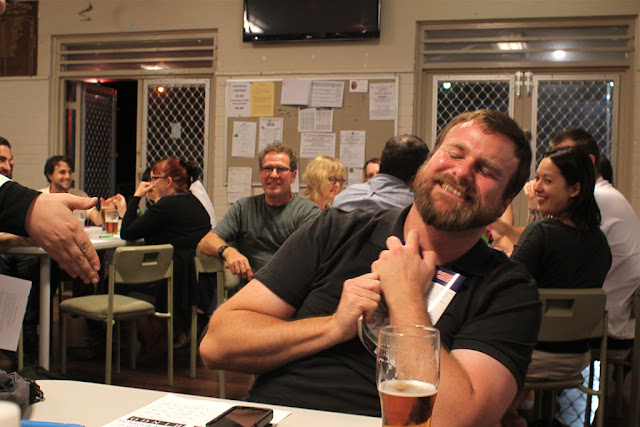 Jarrad was overjoyed to have won a cricket commentary book. He told me it will be a great toilet book. 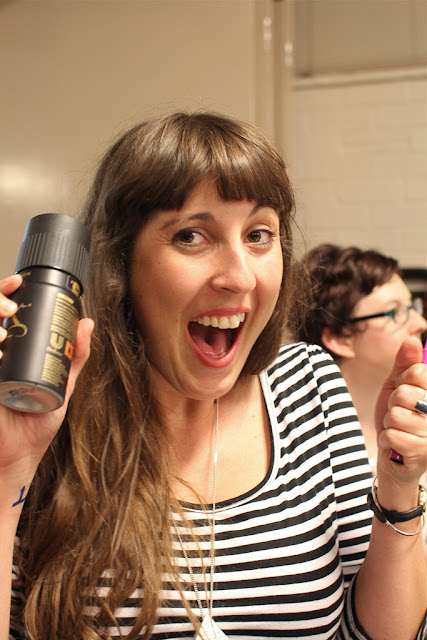 Bridget was excited with her Lynx win as she expects scantily clad women to now throw themselves at her! 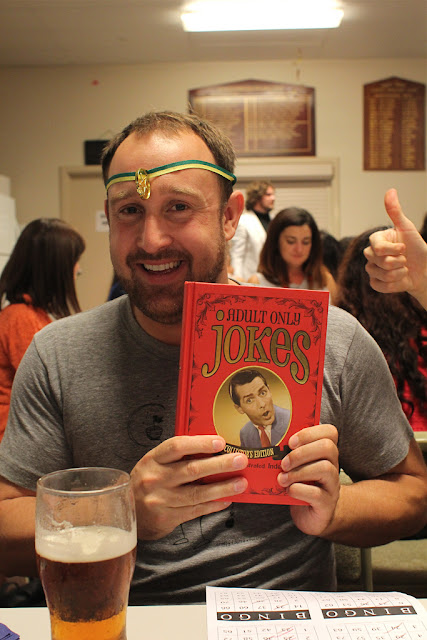 Ben won an Adult Only Joke book and kids-sized medal. He also won the film Bring it On dvd. He has a winning face. 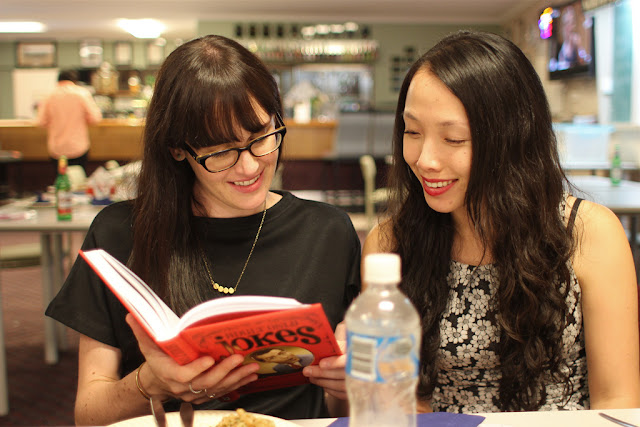 Danica and I reading the Adults Only Joke book. I think we found the only funny joke in it.

In between the bingo and trivia, we were served dinner. 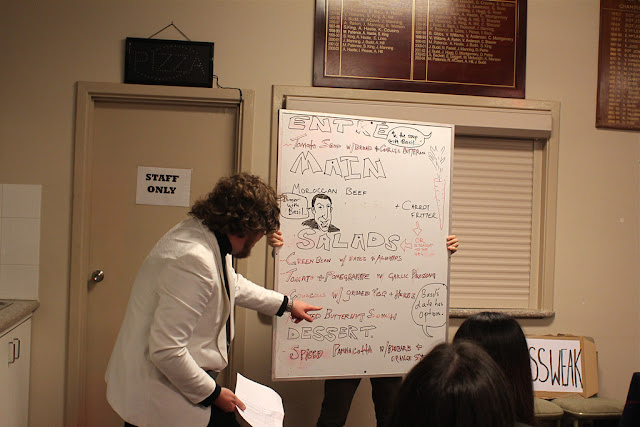 Everyone complains about the high price of food in Perth but for $15 we treated to a three course dinner! Score! 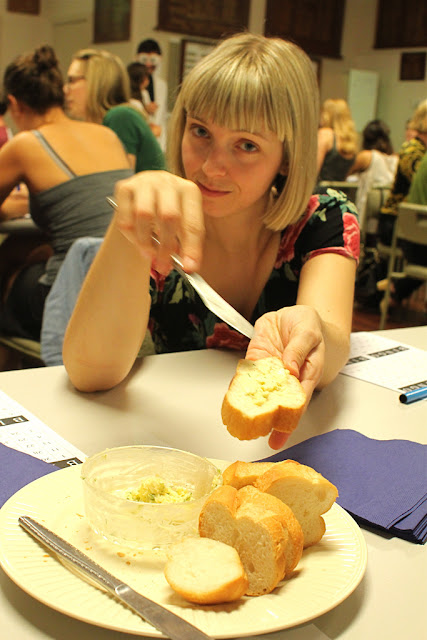 It started with slices of baguette brought to the table served with garlic butter containing freshly chopped dill. 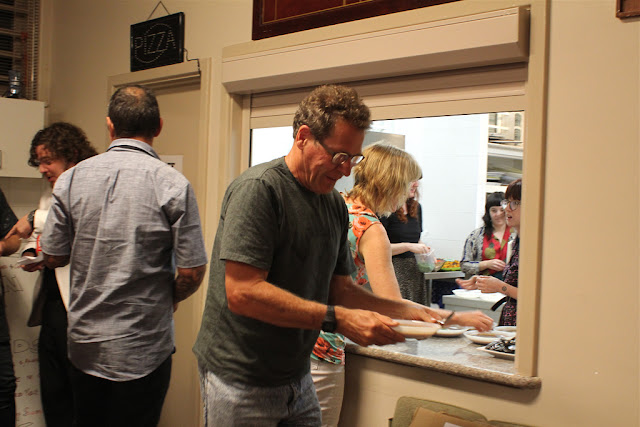 Then canteen style we lined up for our tomato soup entree. The soup has a good acidity to it and was pleasantly sour. It contained some noodles and was garnished with some basil of because everything on the night came back to Basil Zempilas! 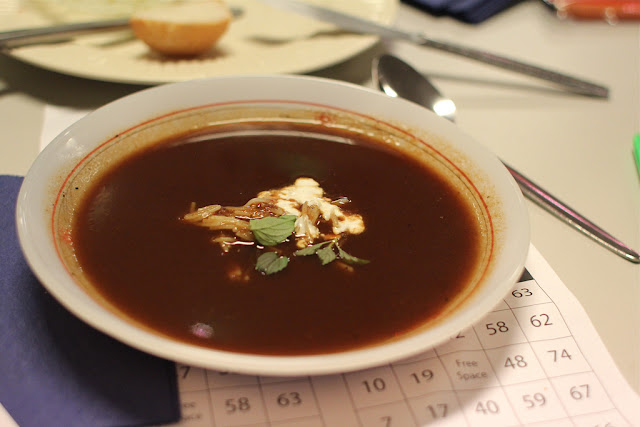 While tucking into the soup I found out that the proper way to use the spoon is to scoop away from your body so I have been doing it wrong all my life! I tried this for a while but then I found myself scooping the soup towards myself which is how I usually eat soup and it seems more natural to me.

Do you scoop away or scoop towards when you eat soup? 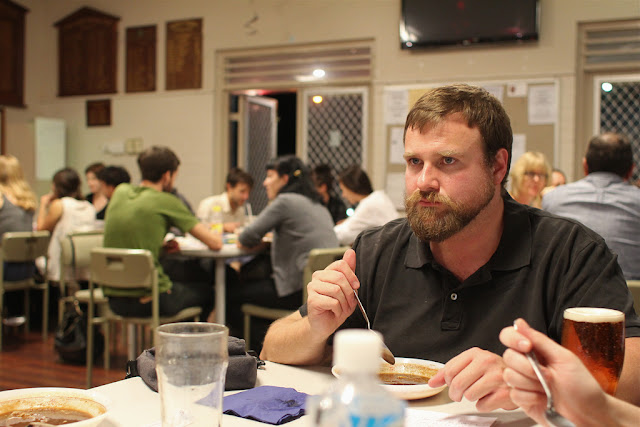 Soup is Serious Business for a Bearded Man

I also learnt a lot about beard maintenance from Jarrad as he informed us of the challenge of eating soup with a beard because if you miss your mouth it’s like chasing an animal in a jungle. 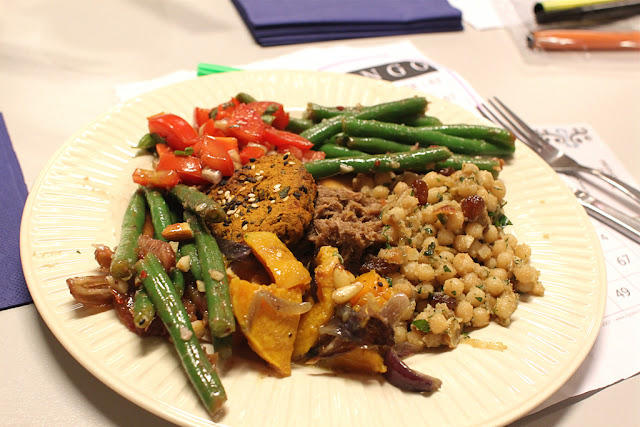 The main was a hearty generous plate of Moroccan stylings with beef, carrot fritter and four different types of salad – green beans with dates and almonds, tomato and pomegranate with garlic dressing, Israeli couscous with grilled vegetables and herbs, and roasted butternut squash. Everyone at my table unanimously agreed that this was a delicious homey meal. The beef had been cooked in spices until it was fall apart tender and we were impressed by the selection of salad provided. You don’t often get four different salads accompanying a dish and each of them held their own. They were simple but great concoctions with good flavour pairings providing different textures and bursts of flavour on the plate. My favourite was the Israeli couscous, it reminded me how good this kind of couscous was and I need to cook it more often. The pomegranate is often underappreciated but was a great addition to the tomato salad. I loved that the green beans were cooked just right and had a good crunch to them. 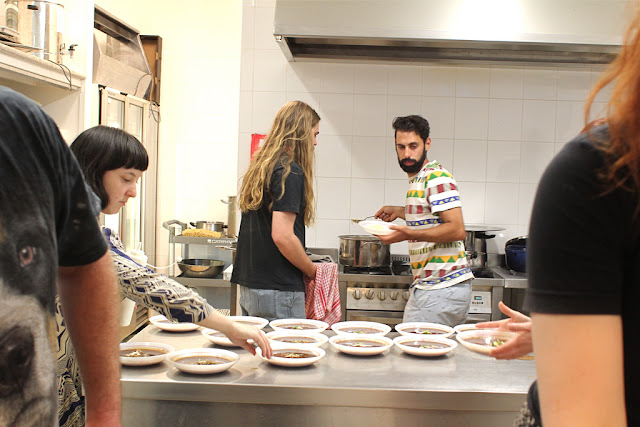 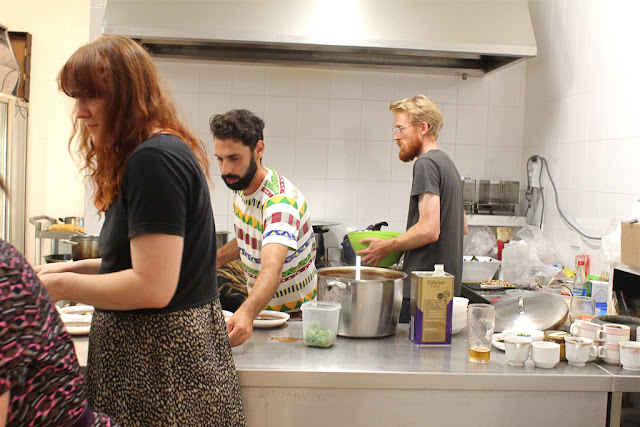 The night ended with dessert of spiced pannacotta with rhubarb and orange syrup served in little tea cups or saucers. 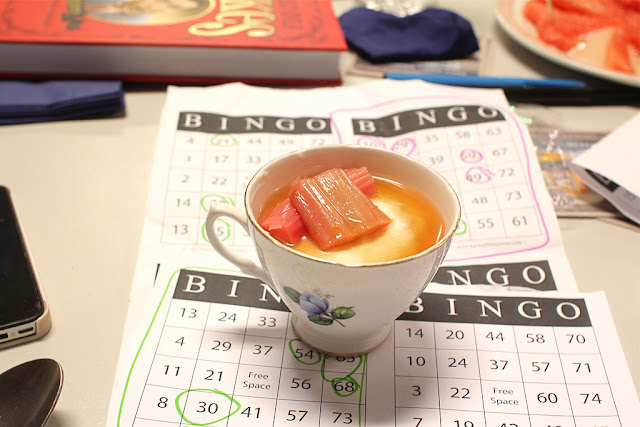 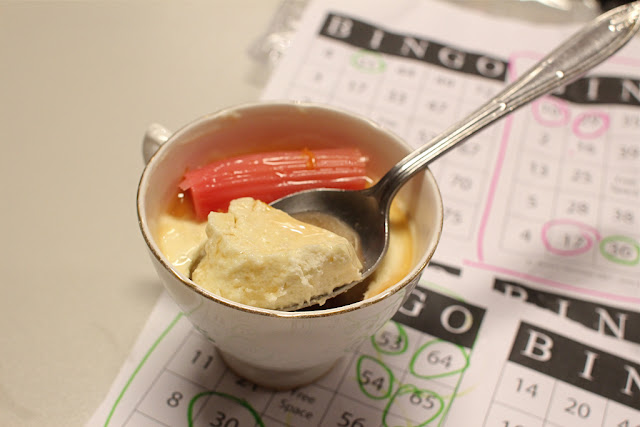 The flavour of the pannacotta was good but the texture was a bit grainy and not smooth and silky, but was still enjoyed by all, especially these guys. 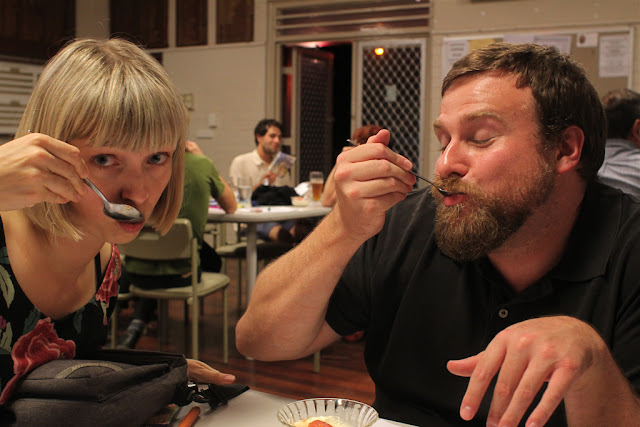 This guy thought it was ok too! 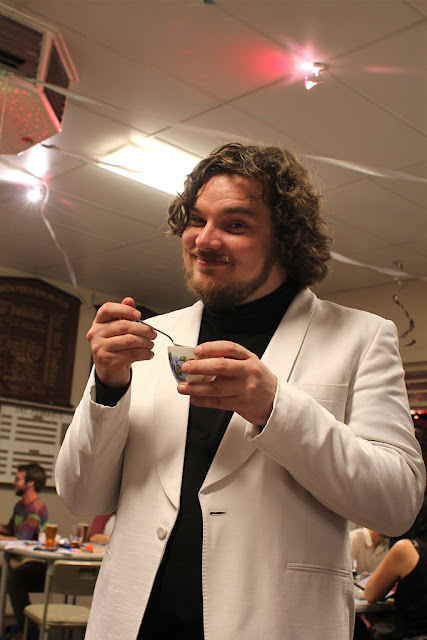 It such a fun night, one of the best Sunday nights I’ve ever had. Great people, great food, great entertainment and now I’ve got some great reading material.

You can get yourself some I Am Still In Yesterday's Clothes zine action from etsy
http://www.etsy.com/listing/123773315/i-am-still-in-yesterdays-clothes-9