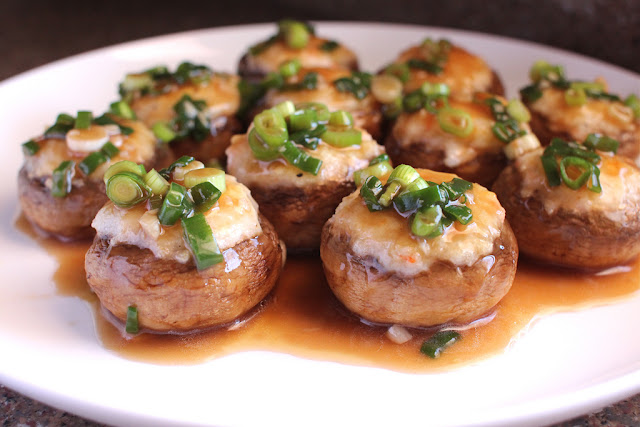 This is a thought that often crosses my mind; and friends and family will remark on it when they see my dad.

You would think that he would be tipping over the scales rather than under, right?

Surely my dad who spends most of his time surrounded by food and does nothing but cook all day would be completely stuffed.

But the reality could not be further from the truth.

The fact is my dad has no time to eat or eats at very irregular hours, and often eats crap.

My dad has breakfast in the morning which powers him through the lunch service. Then he cooks up a few dishes and all the staff at the restaurant sit down together for family lunner (aka the meal combining lunch and dinner, the opposite of brunch). After that it’s time to start prepping for dinner service and my dad won’t have a chance to eat properly again until after 10pm when the restaurant is done for the day.

If my dad has time he’ll whip up something quick at the end of the day to take home to eat or my mum may have messaged him earlier and told him that there are leftovers from the dinner that she cooked for the kids. Sometimes it wouldn’t be a surprise to find my dad tucking into a bowl of 2 minute noodles when he gets home late at night. Because (1) he’s hungry, (2) he forgot or can’t be bothered to cook anything and (3) he’s too tired to care.

I got an experience of this conundrum myself last year when I volunteered to help out with the Beaufort Street Festival cookbook “Recipes & Ramblings: A Food Journey from Beaufort Street and Beyond”. Recipe submissions were received from restaurants, businesses and community members who lived on and around Beaufort Street, and then tested and rated. The best recipes were compiled into the very first Beaufort Street community cookbook. 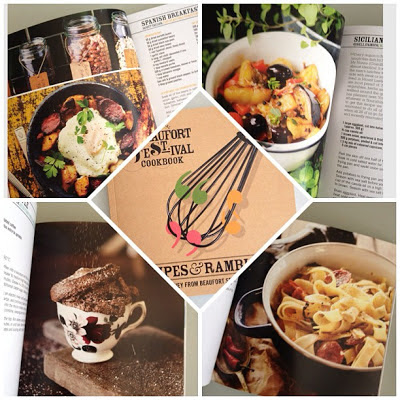 We were working towards a very tight deadline and at times I doubted if we could finish the cookbook in time for the festival in November, but we got everything done by the publishing deadline. About six weeks out from the launch of the cookbook we did the photo shoot over a weekend at Taste Budds cooking studio for over 50 recipes. The project manager gave me the responsibility for being in command of the kitchen and the cooking of the dishes while she oversaw the photography. I enjoyed overseeing the kitchen and would jokingly tell people that I was head chef and all the volunteer cooks were my sous chefs. Not that what we did would even remotely compare to what happens in a restaurant but it was a little taste. For the first time in my life, I was on my feet the whole day prepping and cooking food. I went in thinking that it would be fun and I would get to EAT ALL THE FOODS!

But I didn't eat much food at all.


There were two work spaces – kitchen/cooking and photography/styling.

I had created a timetable which scheduled when dishes would be cooked and photographed. The kitchen and photography areas would work like a tag team. We started at 8am to get as much daylight as possible for the photo shoot. But of course nothing went as planned.

The kitchen couldn’t keep up with the photography for a number of reasons.

Things were a bit disorganized, especially on the first day. It was everyone’s first time doing anything like this so we were all learning along the way and getting into the groove of things.

The cooking times for recipes are LIES! You think you need X amount of time to cook something and the reality is you need XYZ time.

It’s not easy buying all the ingredients needed to cook 50 recipes over a weekend. Trying to somehow calculate how many cartons of eggs, bags of flour, blocks of butter, kilos of rice, meat, seafood, grams of nuts, bulbs of garlic etc. is needed in the most economical fashion. We had a shopping list and thought that we had bought everything we needed in the morning but there would always be missing ingredients, so a few more shopping trips had to be made over the weekend. For one thing, there never seemed to be enough chocolate no matter how many blocks we bought!

Working in an unfamiliar kitchen was also challenging at times. We were burning things in the oven as we were not accustomed to using it and it was hard finding the tools we needed to cook with. I was trying to make vegetable patties at one stage but I couldn’t find a masher so I ended up mashing with a whisk, fork, anything sharp…

Washing. Nobody likes washing. We had the luxury of being in a cooking studio with an endless supply of dishes, pots, pans, spoons, knives, forks to use so we would only wash when we need to reuse a pot or something. Everything else just piled up in the sinks out the back with no one to look after them. Everyone in the kitchen would try to wash a bit here and there when they had a moment to spare throughout the day, but in the end a lot of the washing was done at the end of the day with people staying back to help out. The dishwashers at restaurants must be the most underappreciated person in the kitchen but they are one of the most important!

Oh and I cut my finger on the first day while opening a can (!) but I found one of those blue waterproof bandaids in the first aid kit and I thought, this is what it’s like on TV, these blue bandaids exist in real life!

So the kitchen team was not pumping out dishes as fast as I thought we would.

One of the volunteers in the kitchen with me on Saturday told me that she thought I was hilarious because I was running around all the time, unnecessarily so. I seemed to run rather than walk as I moved between the kitchen to the big fridge in the second room and the washing sinks out the back. I was trying to be fast I guess. Tip: Running around does not make your food cook faster.

Even then I was too busy getting the next dish ready to be scouting out the food.

At the end of the first day, overseeing a kitchen of 4 volunteers cooks, including myself for the past 10 hours (8 hours cooking, 2 hours washing/cleaning), putting out 25 recipes, I was famished. I went home that Saturday night too tired to cook anything but luckily I had a container of pho in my freezer, so I boiled some noodles, heated up the broth and ate my first proper meal for the day. I didn’t have breakfast in the morning as I thought that there would be lots of food to eat and I didn’t want to fill up (rookie error!). I went to bed early that night and got up early the next morning to do it all again. Sunday was a little better, just.

From the cookbook photo shoot, I gained a new found respect for my dad and chefs for the hard work they do in the kitchen, even more so when it became evident to me how little time you have to eat which seems a little ironic, don’t you think?

For chefs, I imagine that the most important meal of the day would be the time of the day when all the staff get together for family meal.

Every Monday night (the night my dad’s restaurant is closed) I go over to my parents for dinner and sometimes my dad will show me a new staff meal that he recently cooked. My dad told me that a lot of Chinese dishes involve stuffing things and deep frying, and this mushroom dish derives from that concept. It involves stuffing mushrooms with prawns and frying them in a pan until cooked. It’s very simple and requires few ingredients, and because it’s fried rather than deep fried it’s healthier ;)

I really enjoyed this dish the first time my dad cooked it for me. I was actually surprised at how good it tasted because I wasn’t expecting much due to the use of button mushrooms. I may be a little prejudiced towards button mushrooms as they are the least exciting mushrooms but their blandness suits this dish. Using only prawns in the stuffing means that it cooks fast and there is minimal seasoning so you get the pure taste of the prawn. Encasing the prawn inside the mushroom prevents it from overcooking. The oyster sauce compliments the stuffed mushrooms and it’s that classic oyster sauce based on a good chicken stock that often goes with Chinese dishes.

This is one of the things that I like to cook when I am tired as it’s quick and tastes great. 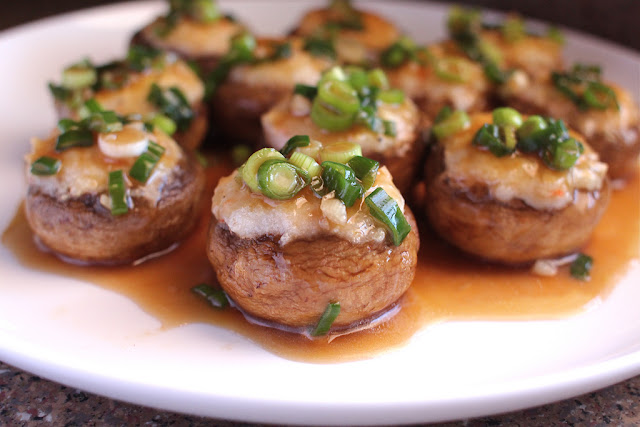 (An original recipe Blue Apocalypse learnt from her dad)

Clean the mushrooms (wipe with a wet paper towel) and remove the stems.

Put the prawns into a processor, add in a little salt and pepper, and process until it forms a paste. 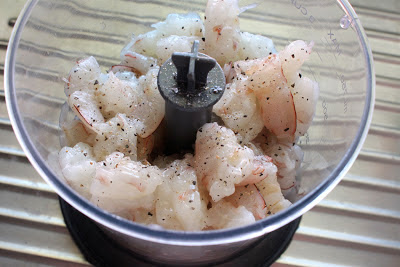 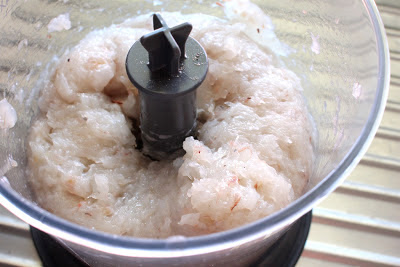 Using a teaspoon, fill the inside of each mushroom with prawn paste, pressing to spread the prawn stuffing evenly. 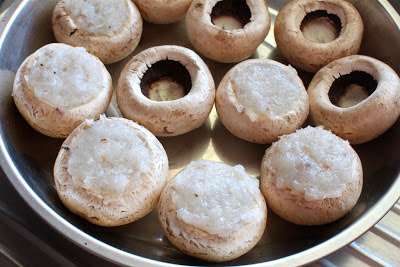 Heat some oil in a frying pan and add the mushrooms into the pan, prawn side down and cook for 1-2 minutes until it’s changes colour and is slightly golden. 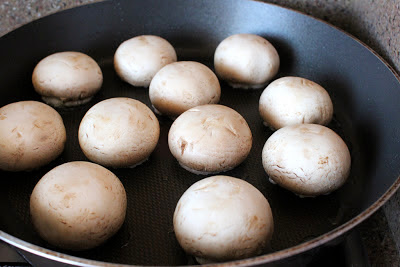 Arrange the mushrooms on a plate. 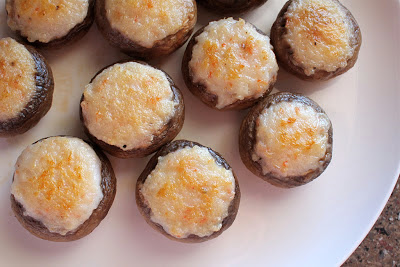 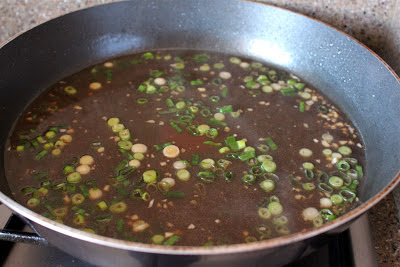 Spoon the sauce over the mushrooms. 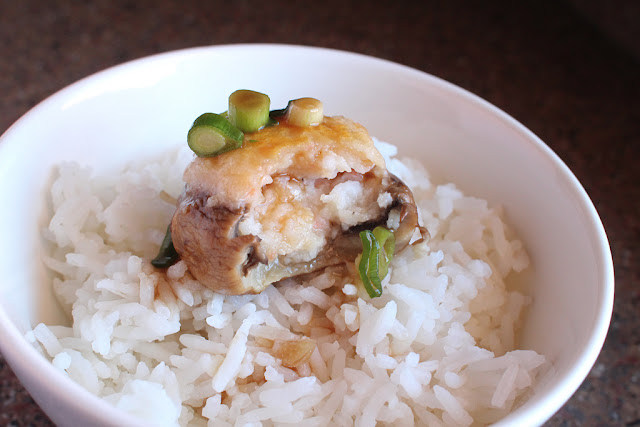 Posted by Blue Apocalypse at 12:58 PM