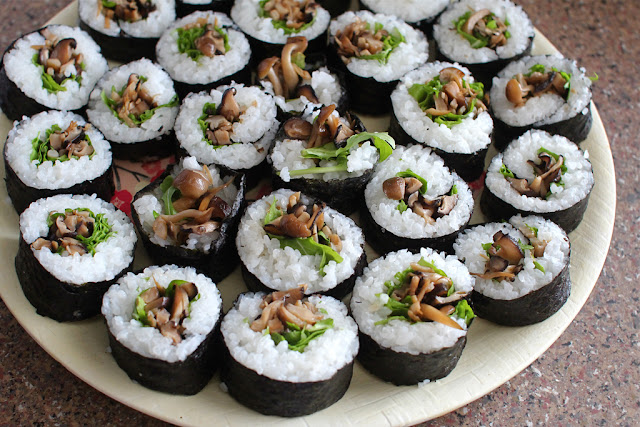 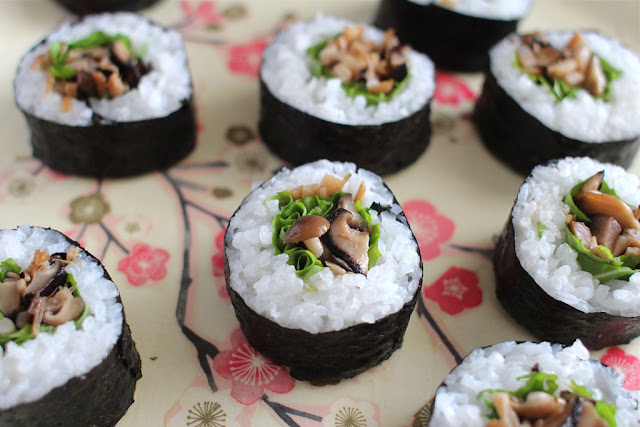 I am a minority meat eater.

About 75% of my close group of friends who I have known for 7+ years are vegetarian.
No, they are not hippies, but they are left and indie, which seems to have a high correlation with vegetarianism. In such circumstances, there would have been a high probability that I could have turned vegetarian too at some point in my life. However, my dad is a chef and I have been exposed to many amazing dishes throughout my life and so many memories of family feasts involve meat – a whole steamed fish, a whole roast duck or master stock poached chicken and on special occasions we would hack into a whole suckling pig. The Chinese have this thing where they like to serve the whole beast on the table as it is considered auspicious to have a beginning and an end, symbolizing abundance and togetherness. I enjoy eating meat and would find it very hard to give it up, and my family may disown me if I do. 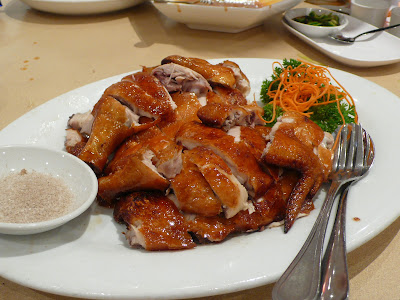 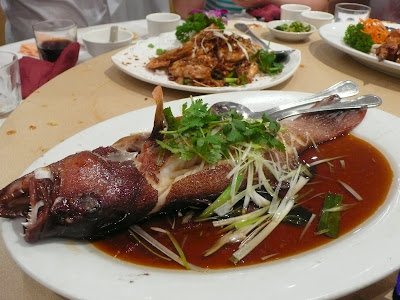 It would not be unusual for me to be dining out at an Indian restaurant with a group of 10 people and be the only meat eater. But I have never restricted myself when ordering around my vegetarian friends, whilst they ponder over all the vegetarian curries on offer to order to share, I would order a plate of lamb chops all to myself. So one good thing is that I never have to share my food but I get to try a bit of everything else's dishes. While I tend to go for a meat option when dining out, when we have pot luck dinners or picnics I have cook food that is vegetarian friendly.

It always surprises people when I tell them that most of my friends are vegetarians, especially other food bloggers, some tell me that they wouldn’t be able to stand it. It’s common to find food bloggers taking a jibe at vegetarians in blog posts with statements like “vegetarians looks away, here's a picture of meat”, “feel sorry for vegetarians because they can’t eat here” or “I’ve ordered a token vegetarian dish”. It’s no secret that a general disdain is exhibited towards vegetarians because being vegetarian limits the food experiences you can have and vegetarian food is often viewed as bland or inferior.

Being vegetarian is almost like telling people that you are a non-drinker. You become subject to sneering remarks and people become condescending, telling you that you are missing out or you need to loosen up a bit and have some fun. No you are not better than everyone else just because you eat bacon or you like to have a beer or two. In the end it’s about choice. If vegetarians wanted to eat meat than they could but it doesn’t appeal to them, just as alcohol does not appeal to some people.

I have been exposed to a lot of different vegetarian dishes through my friends who have shown me time and time again that vegetarian food can be delicious. Without meat as the main source of protein, vegetarians are creative in cooking a variety of proteins (nuts, seeds, pulses and grains) and using different spices and seasonings to flavour dishes. I’ve found that vegetarian food is anything but boring. The only boring vegetarian food will be found at restaurants which provide one or two vegetarian dishes out of tokenism rather than offering a genuine choice. You can tell that not much thought has been put in when the only choices available are risotto or pasta (neither are particularly done well) or a medley of vegetables (ie: I stacked every vegetable I could find in the kitchen). I also have to be a bit more creative and think about what I cook for my friends. I like this challenge. One thing that I don’t think many people realise is that vegetarians also love food and they want to be excited by food and eat interesting dishes as much as meat eaters.

I coexist happily with my vegetarian friends, we often joke about it. The fact of the matter is that all vegetarians need to keep company with a meat eating friend, just as it’s a good idea for drinkers to have a non-drinking friend who can be the designated driver and actually recall details of the night before.

Last year my friends and I went down south to Margaret River. We had a rest stop at a petrol station/lunch bar off the highway on the drive down. We replenished ourselves with food at the lunch bar, it wasn’t anything great, but you can’t expect much from lunch bar connected to a petrol station off a highway with nothing else around. A lot of meat pies which have been sitting in the pie warmer for god knows how long, chiko rolls, dim sims, toasted sandwiches, chips, wedges and I admit to having chicken wingdings (trying to relive a childhood memory that was not worth going there for). While we were sitting down and eating our food a lot of bogan like people came in and out of the lunch bar. It was the major highway heading down south so the day-to-day clientele were truckies, hi-vis wearing tradies, other holidayers coming in to grab a Mrs Mac’s to go. We dubbed it bogan central. I was the only meat eater in the group and my friend commented that “it’s a good thing you’re eating meat, otherwise we might get bashed up”. This was a joke of course, but people perceive you differently and look at you funny sometimes when they know you are vegetarian. I knew my wingdings would save the day somehow, even though nothing could save its taste. To all the bogans entering the joint we were sending them telepathic messages…. “There’s meat on our table, we are not weird.”

For a picnic, I came up with an idea to make some vegetarian sushi inspired by a lunch that I had at Aisuru Sushi where my friends were overjoyed by the fact that there was a full vegetarian and vegan menu, not just the token 2-3 items that they usually have to deal with. The mushroom sushi dishes were a favourite so I thought I would create my own version of mushroom sushi for my friends.

So here’s my take on a mushroom sushi, bursting with 5 different types of mushrooms with a lot of depth in the flavour as a result of simmering the mushrooms in a dashi-soy broth until the liquid had evaporated into the pores of the mushrooms. 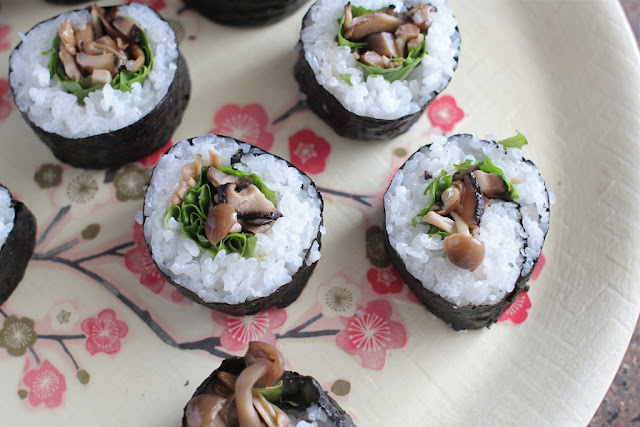 (An original recipe by the Blue Apocalypse, inspired by lunch at Aisuri Sushi and dedicated to my vegetarian friends)

Using scissors, make a few snips into the kombu to help release the flavours. Place water, kombu and shiitake mushrooms in a saucepan and soak for at least 30 minutes (the kombu and mushrooms will soften and expand). 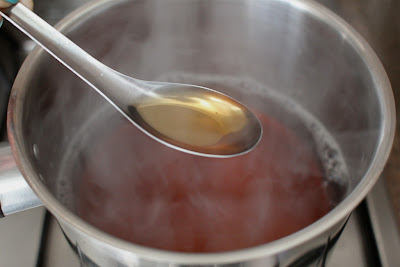 Heat up a large frying pan and add the mix of mushrooms (enoki, oyster, hon-shimeji, fresh shiitake mushrooms and rehydrated sliced shiitake mushrooms that was cooked in the dashi broth). Fry the mushrooms for a few minutes until they have browned slightly and reduced in volume.

Then add in a cup of the mushroom dashi soy broth and continue to simmer until the liquid has evaporated. 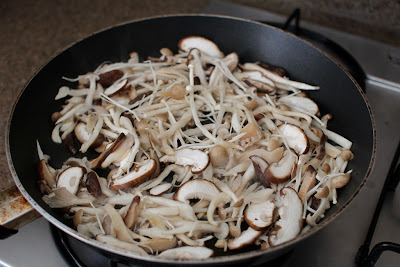 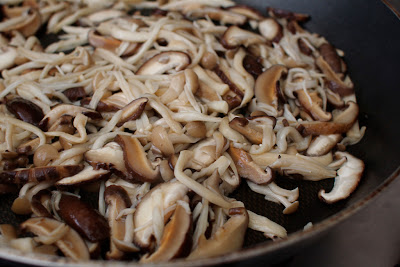 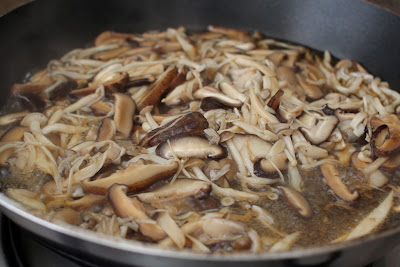 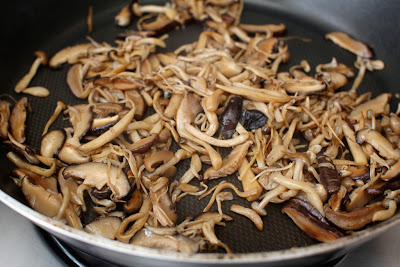 Cook the rice according to the packet instructions OR Rinse the sushi rice repeatedly with cold water until the water is clear. Drain thoroughly.  Add the sushi rice into a rice cooker and add in 3 cups of water. Turn rice cooker on.

When the rice has finished cooking, remove it from the cooker and place it in a large bowl, drizzle the rice vinegar mixture evenly over the rice and thoroughly mix into the rice.

Place nori sheet down on bamboo mat with the shiny side down and rough side up.
With wet hands, spread rice on the nori sheet, the layer of rice should be thin, less than ¼ inch thick.

Your hands should be wet when working with the sushi rice as it is sticky but keep hands dry when placing the nori on the bamboo mat and rolling it up.

Leave an inch of nori uncovered (the end furthest away from you) and rub a little of water on it (this will seal the two sides of the nori together).

Line up ingredients in the middle of the nori – place some rocket leaves on first and then add on top some cooked mushrooms.

Holding the closest edge of the bamboo mat, roll the sushi away from you, tightening the roll as you go. Keep the contents in the sushi roll tight and firm by using the bamboo mat to shape the roll, sliding it over and across the top of the sushi.

Run a knife under hot water to prevent it from sticking when it cuts the sushi pieces. Slice the sushi into ~ 2cm pieces.

Eat the mushroom and rocket sushi pieces dipped in a little soy sauce. 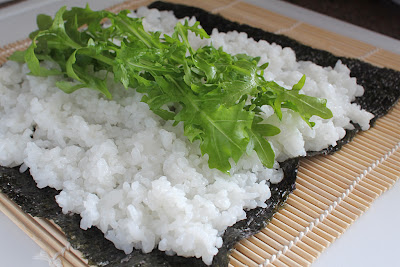 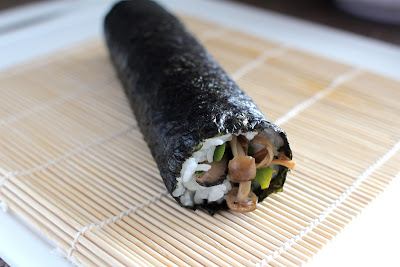 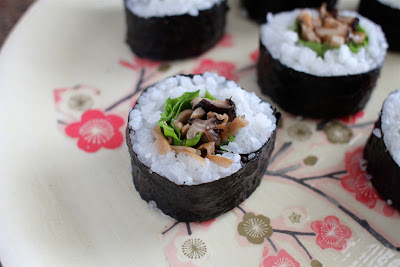 Posted by Blue Apocalypse at 4:21 PM