The Twilight Hawker Markets started in 2011, as a part of the Eat Drink Perth festival, running for the month of March. Now it looks like it will become a permanent fixture of Perth’s summery months, it started up again on 28 October 2011 and runs until 30 March 2012, every Friday 5-8pm in Forrest Chase.

The second offering of the Twilight Markets is bigger and better with a more open set up, more seating and more stalls on offer. It’s great to see the number and variety of food stalls expanding with new food vendors setting up shop, as it not only shows that the people of Perth are willing to try new things but that people are also willing to task risks by investing in bringing food to the people. It's great to see the food scene in Perth growing from strength to strength. 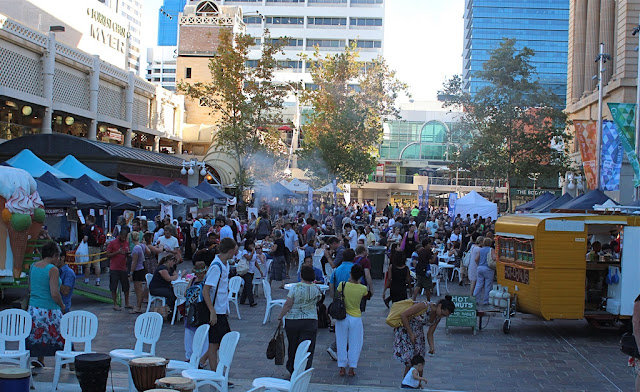 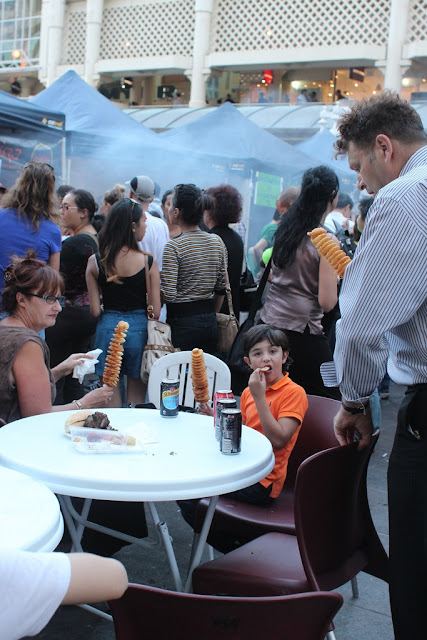 There are always huge crowds at the Twilight Hawker Markets and the queues can be long, even well into the night. As I stand in line waiting to order, it’s interesting to people watch and overhear the conversations around me. Many people walk around and have a peek of each of the stalls trying to make a decision on what to eat, and some eye the plates of others sitting down enjoying a meal and point at a stranger’s plate and ask “where did you get that from?” In a restaurant setting you wouldn’t normally prod people about what they are eating but outdoors here at the Twilight Hawker Markets, you see people happily conversing with each other, and also sharing the communal dining space. I love the sense of curiosity and the enthusiasm that comes through as people share details of their hawker food finds with others.

I have been going to the Twilight Hawkers Markets nearly every Friday after work, it’s great to not have to think about cooking at the end of the working week. At the Murray Street Mall entry you are greeted by a smokey haze and enticing charred meat smells created by the Malaysian Satay stall and the El Asador Argentinean BBQ stall. There are always never-ending lines for these stalls, grilled meats are a definite crowd pleaser. 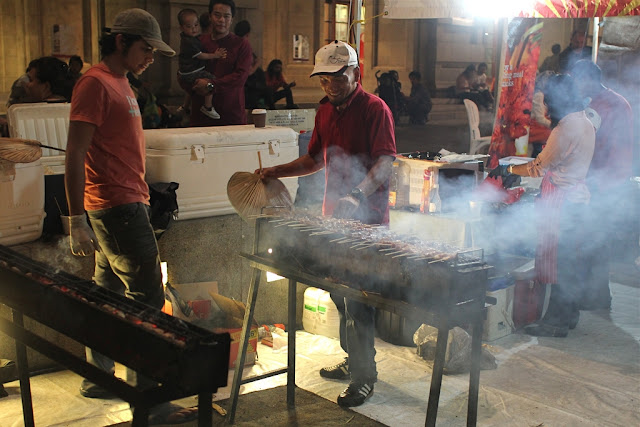 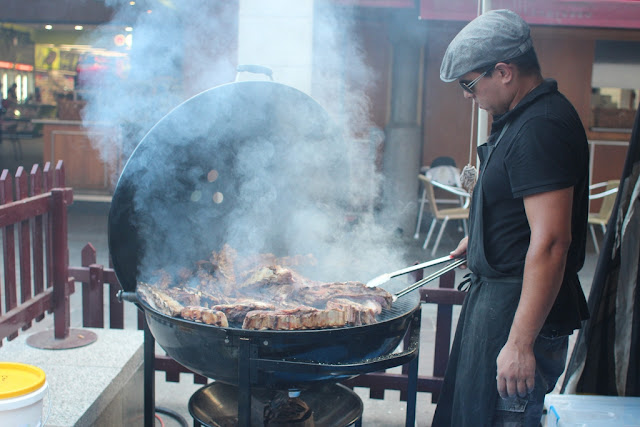 I’ve ordered the beef ribs from El Asador which comes with a chimichurri herb sauce. I’m given big chunks of beef ribs on a plate that have some nice bits of fat, barbecued until almost black but not burnt so that it has a wonderful charred taste. Although the beef is a bit chewy, I find it delicious. 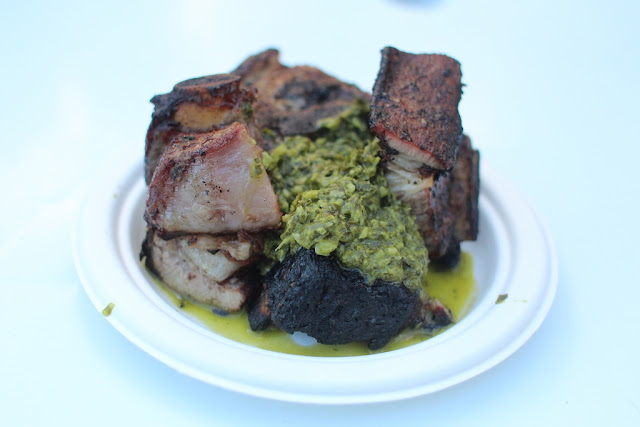 I was quite excited to see the Japanese Savoury Pastries stall selling takoyaki, it brought back memories of Japan. Takoyaki are fried octopus balls with a bit of octopus cooked inside a pancake-like batter. Famous in Osaka, takoyaki is not something that you would generally find on restaurant menus, it’s a street snack and can be purchased at many street vendors across the Osaka and Kansai area. I lined up for some takoyaki one night and as I got closer and read the menu, I saw that they had westernised the takoyaki with a western style pastry batter, cheese and vegetables. You can top the takoyaki the traditional way with Japanese BBQ sauce, Japanese mayonnaise and dried bonito fish flakes, but there are also additional sauce options such as sweet chilli sauce and mustard. Even though I wasn’t getting the real deal, I was still curious to try and see what this westernised version of takoyaki would taste like. 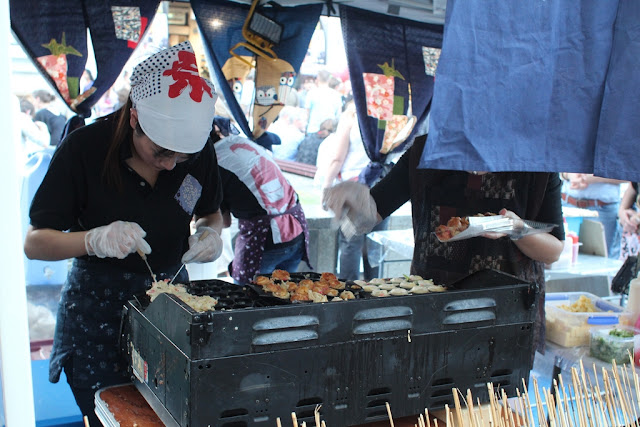 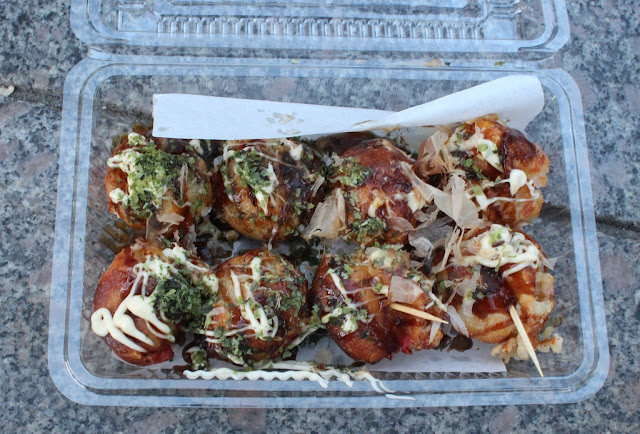 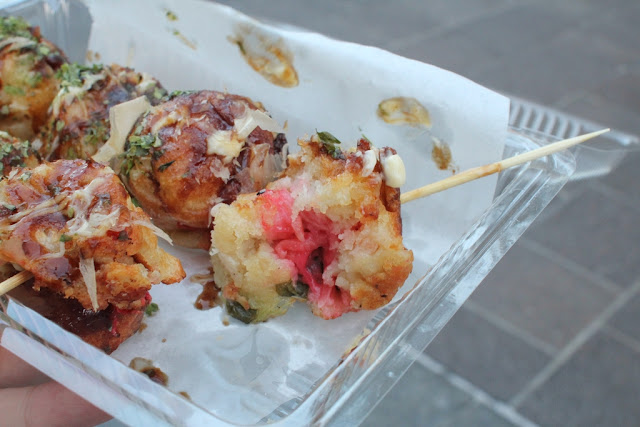 The takoyaki looked good but when I popped the balls into my mouth I was a little disappointed. The best way to describe the takoyaki is to say that it felt like I had popped a pizza in my mouth – the dough was like thick crust pizza and it was quite cheesy. Although the Japanese Savoury Pastries version of takoyaki doesn’t quite appeal to me, it seems to be popular with the crowds at the Twilight Hawker Markets.

So from a Japanese street food experience that didn’t meet my expectations, a week later, I would find one that went over my expectations in Fumi’s Japanese Pancake and Noodle stall. 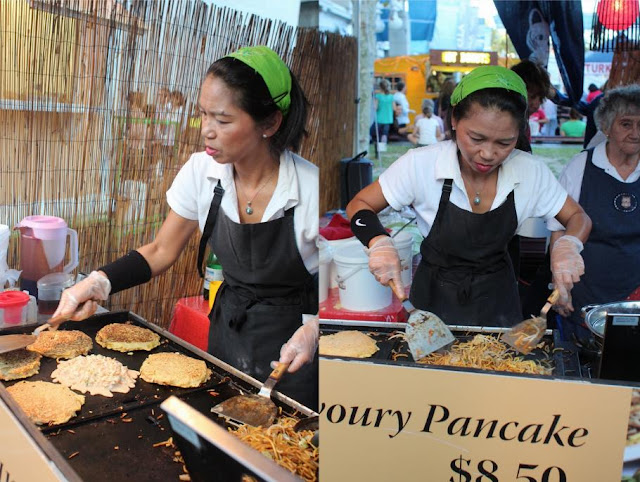 The lines for Fumi’s Japanese Pancake and Noodle stall are always long, the sign at the front says that the Japanese pancakes are a recipe from Fumi’s great grandmother and dressed with a homemade sweet soy sauce. I approached cautiously as I had my doubts on whether the stall could pull off Japanese street food, but I’m glad that I decided to try the combo of Japanese pancake and noodles because it was very enjoyable to eat. I really liked the taste and texture of the pancake batter, and the noodles were well flavoured. 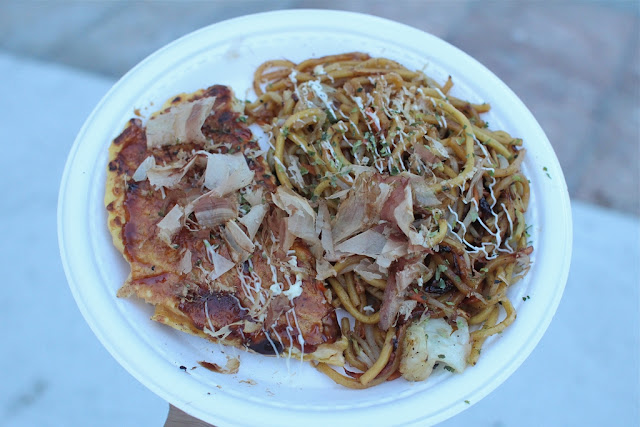 (combo of Japanese pancake and noodles) 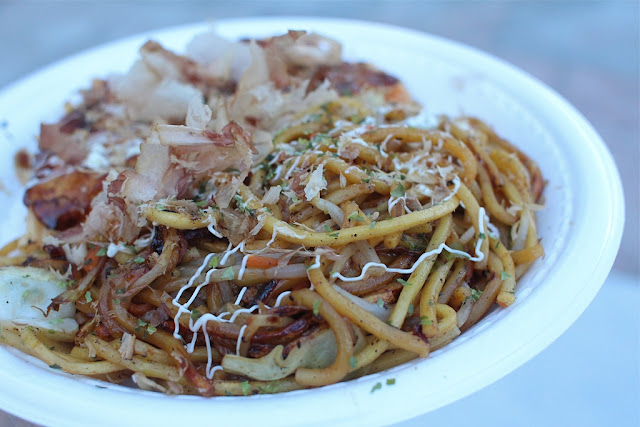 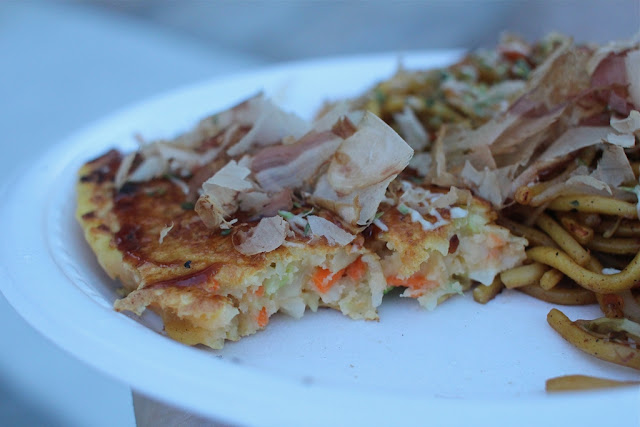 (Inside of the Japanese pancake)

I’ve also enjoyed the food from the Moroccan stall. I think that it’s a stall that gets overlooked and I wouldn’t have tried it myself until I went to the Twilight Hawker Markets with my cousin one night and we both went our separate ways to line up for food and then regroup. My cousin bought a tajin dish which I tried and found to be a really hearty meal, I liked the flavours coming through the dish so much that I when I was at the Twilight Hawker Markets the following week I ordered it again. 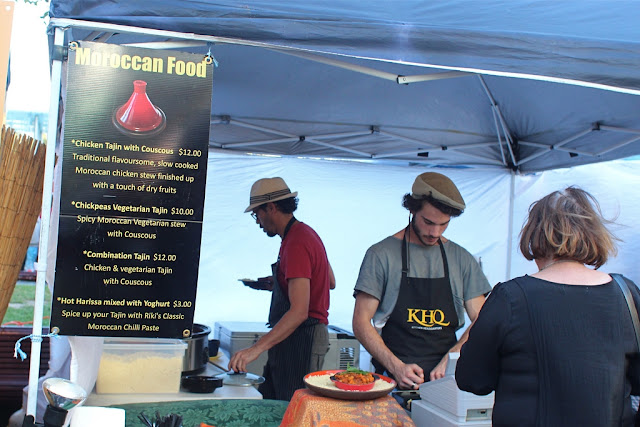 While I like trying new things from different stalls, I have a habit of always ordering something from Marcelita's Empanadas and Red Hot Spatula when I am at the Twilight Hawker Markets. 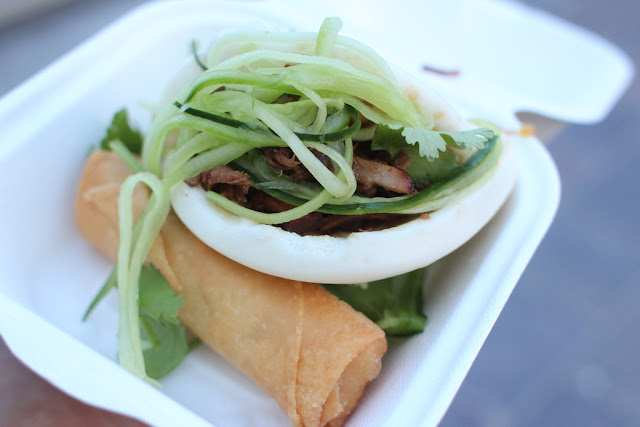 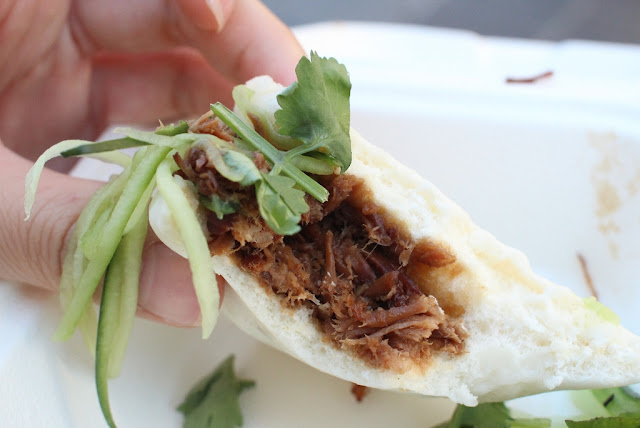 I find Red Hot Spatula’s pork sliders, comfort food – fluffy steamed buns filled with pulled pork cooked in a sweet soy sauce with hints of spices like star anise and cinnamon, I love eating it. I also like ordering the Vietnamese inspired chicken salad as it is refreshing to eat on a hot summers day, there is a good balance of vermicelli to vegetables and chicken, and the dressing has a good hit of fish sauce and chilli. 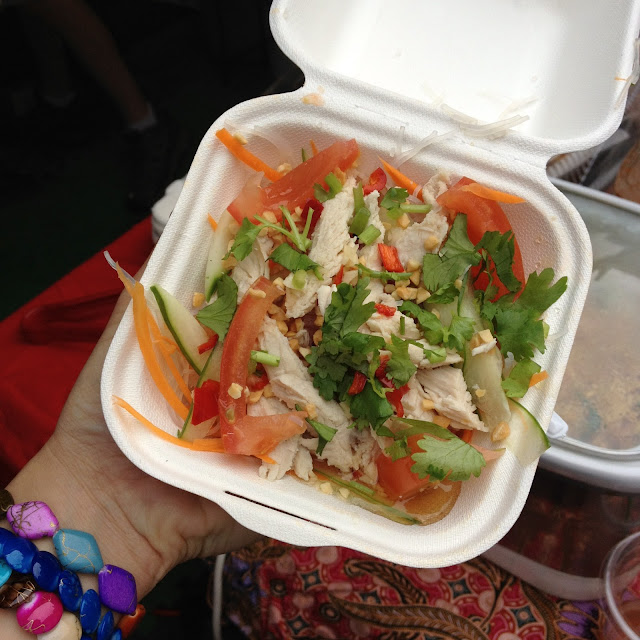 Marcelita’s Empanadas (run by Perth blogger Abstract Gourmet and his wife Marcela) are always satisfying to bite into as the corn maize used for the dough makes it light and crisp, and the fillings burst with flavour. There is a choice of shredded beef brisket, pulled pork and lime, and potato empanadas made fresh to order. You can watch the Empanadista's busy flattening, stuffing, shaping and then frying each empanada right in front of you. I have tried empanadas at other places around Perth and I can honestly say that Marcelita’s are the best. 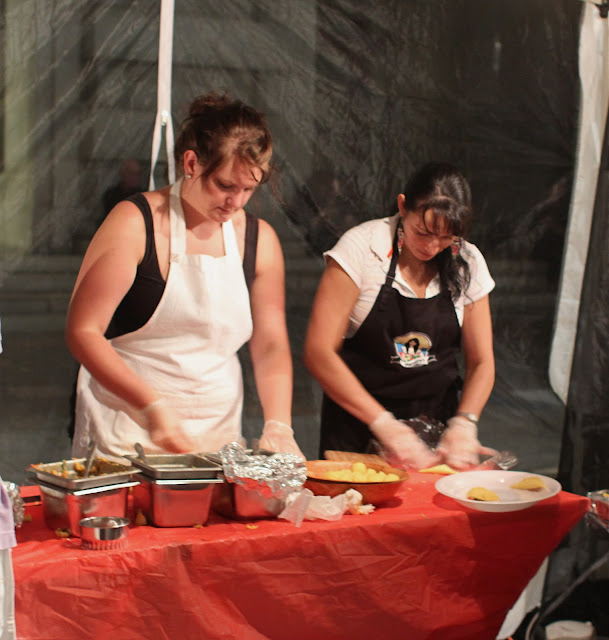 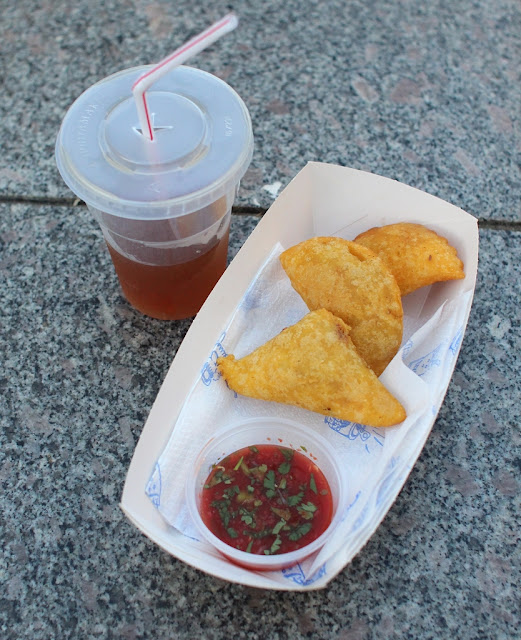 (Guarapo and empanadas - I always go for one of each - pork, beek and potato) 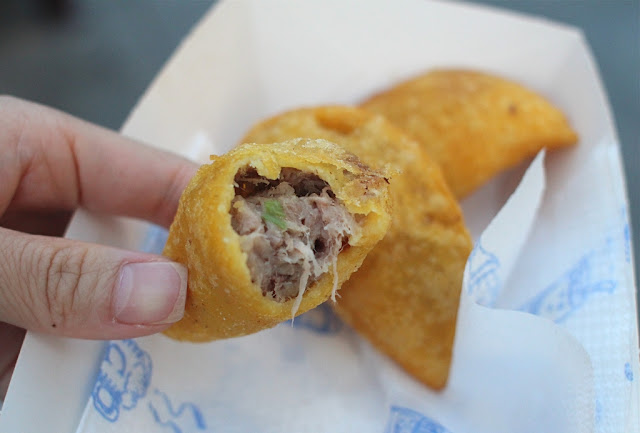 (my favourite empanada is the pork and lime one)

Amongst all the deep fried, grilled, barbecued, hot foods, you will find Maison Saint-Honore, a macaron stall selling some of the best macarons I have eaten in Perth in a wide variety of classic and interesting flavours. 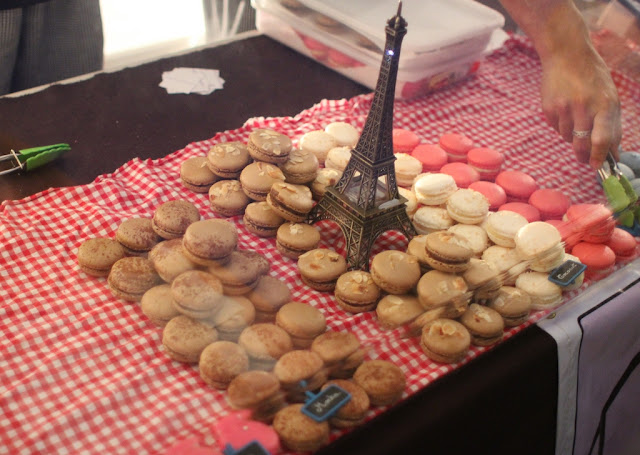 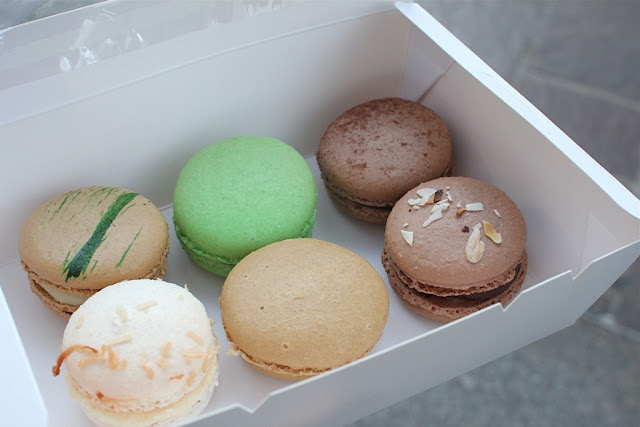 If you are really lucky, you may find the Delish Ice van at the Twilight Hawker Markets. Gourmet popsicles made by Katie who travels up to Perth from time to time all the way from Margaret River. I always get excited like a little kid when I see her caravan and I love the fact that unlike the sugar laden artificially flavoured popsicles that I had as a kid, these popsicles are made with fresh fruits and vegetables which you can really taste and most have little or no sugar. There are always so many interesting flavour combinations on offer like coconut, pineapple and lime; watermelon and mint; apple and peach; chocolate and marshmallow. 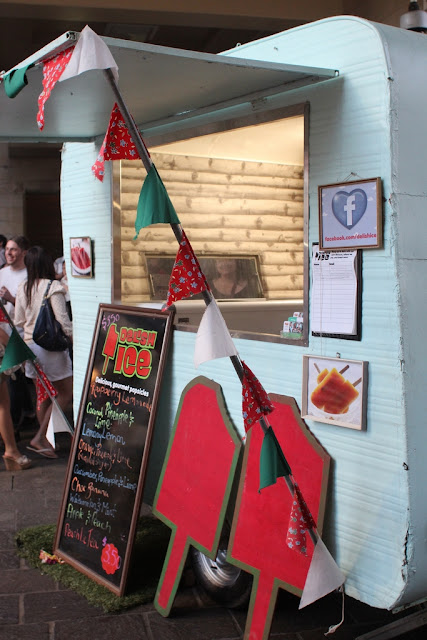 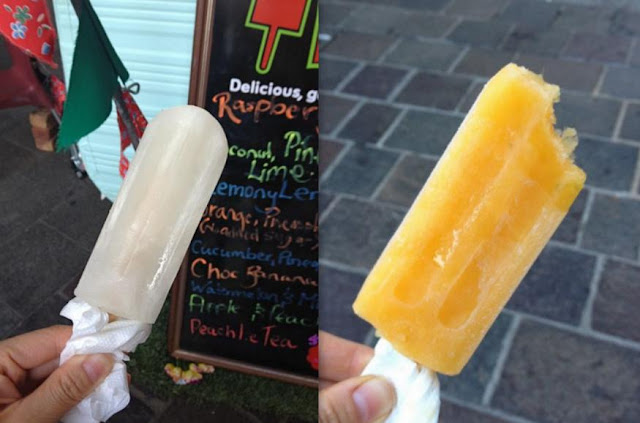 The Twilight Hawker Markets run for another 2 weeks so make sure you get down and check it out. There are also heaps of other food stalls on offer and I aim to try some new dishes. What stalls have people tried and would recommend that I check out?

Posted by Blue Apocalypse at 10:11 AM