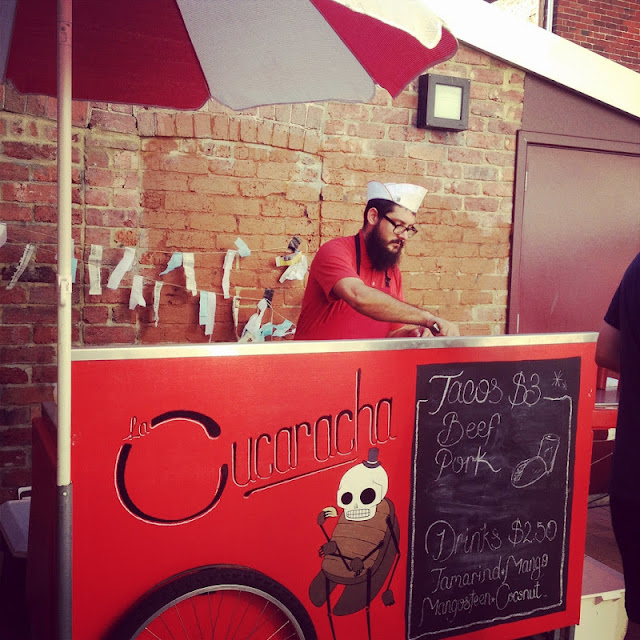 Customer X - “Are you a Taco Truck?”
… [idiot, this station is clearly immobile]
Customer Y - “It was ages before I knew what la cucaracha was…hahaha” (nervous kind of laugher)
… [hmm I wonder how many times he has heard that one before, probably x100…]
This is what I overhear as I am waiting in line to buy some tacos from La Cucaracha (my thoughts are in italics), Perth’s one and only taco cart, yes a cart, wheeled in and wheeled out. It’s a simple little set up. 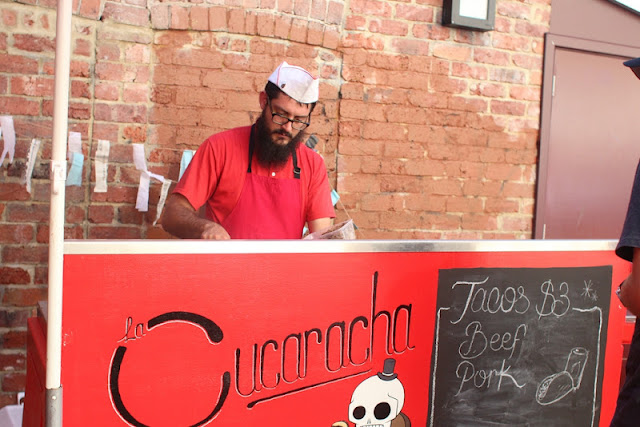 La cucaracha is a traditional Spanish folk song which became popular during the Mexican Revolution, the song depicts political opponents as cockroaches but overtime the lyrics have been adapted to provide political or social commentary, similar to Yankee Doodle. Interestingly, Los Angeles Taco Trucks used to be referred to as ‘roach coaches’ (as people were concerned about the sanitary conditions) and some even played la cucaracha as they roamed the streets.
The idea of food trucks is generating a big buzz in Australia at the moment with Sydney recently giving the green light to its first fleet of food trucks. The food truck phenomenon has blitzed Los Angeles and it looks like Australia will follow suit, in some shape or form.
What is the allure of a food truck? Maybe nostalgia for street food eating, a cheap feed, the spontaneity of it all, the ability to watch your food being cooked fresh right in front of you, the aromas which drift through the air and tell you that this is how food is meant to be enjoyed, outside in the sunshine. There’s also the cool factor because you actually found the damn truck in the first place. Food trucks are all about the seek and pursuit, the chase down the street, like when you run after the sounds of a Mr Whippy ice cream van on a hot summers day.
What I also think is good about a food truck is that they only offer a few items, but do it really well and they are generally simple things too like tacos, burgers, dumplings, buns, hot dogs, kebabs, sandwiches, cupcakes (ie: food that you eat with your hands) and often simple foods can be the most satisfying. A physical restaurant needs a larger menu and when many things are offered, inevitably some items on the menu will be really good, while others are just there to fill up space. In addition, when you get food from a food truck, you know exactly when you want, with a limitation on choice, you don’t have to deal with the indecision often faced at restaurants.
Yes, I really do like the idea of food trucks.
I think that Perth has been quite lucky in that even though we don’t have food trucks per se, over the past year with the advent of the Twilight Hawker Markets and many festivals (Beaufort Street Festival, Angove Street Festival, William Street Festival just to name a few), we have had a lot of food stalls popping up such as the likes of Marcelita’s Empanadas, Red Hot Spatula’s Asian Tapas, Ole Paella, Fumi's Japanese Pancakes & Noodles, Dracula Catering and El Asador Argentinean cuisine which are all essentially an immobile food truck. The stalls set up in one place, sell food and then pack down, which is how food trucks have to work too as they can’t just set up anywhere. While food trucks seem to be born free, in actual fact, they are quite regulated with the current trial of food trucks in Sydney required to operate around the closing times of existing cafes and restaurant, and even in Los Angeles there are restrictions on food trucks as to where they can park and for how long. A barrier against food trucks operating in the Perth scene is that the Council views it as providing unwanted competition to established, rate-paying restaurants. Hopefully in the future Perth’s position on food trucks will change but at least now we have heaps of awesome food stalls to enjoy. 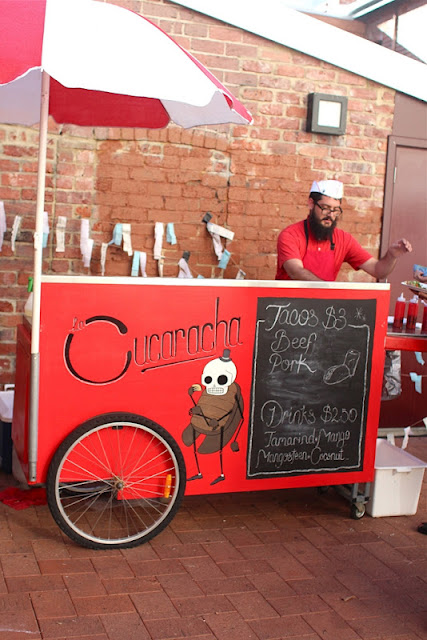 So I had heard about La Cucaracha through the grape vine and I stumbled across it as I was checking out the Laneway Night Markets (Hook and Lock Lanes in Northbridge), held over the weekend of 28-29 January, which was a part of the Fringe Festival 2012. At the moment La Cucaracha appears to only do small gigs at some festivals and vintage markets. “Where can we find you?” a customer asked, the dude behind the cart says “check out my website and join the mailing list at www.lacucaracha.net.au”
I ordered what was on available on the board, a beef taco and a pork taco (I’ve heard that bean ones are offered too). It’s a methodic one man operation, in a set rhythm, balls of dough appear from behind the desk to be flattened with a tortilla press, the grill is fired up with his oil spray gun and the tortillas are cooked in front of you as well as pre-roasted fall apart meat which is heated through. 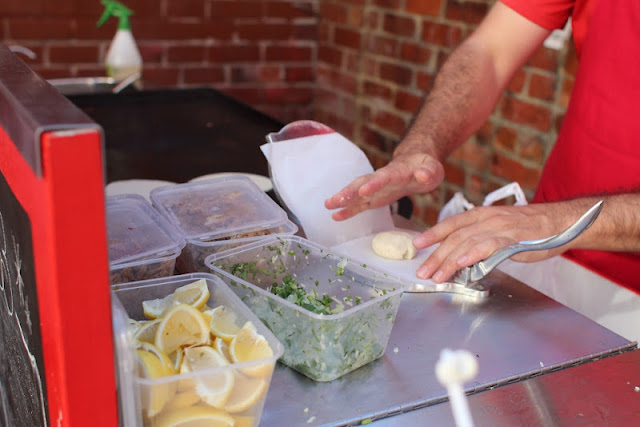 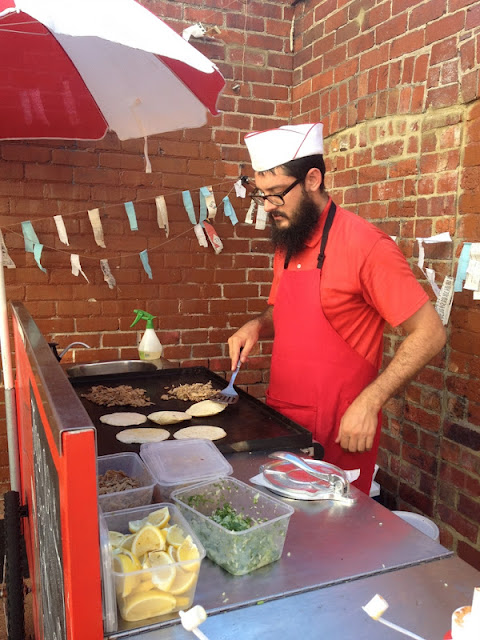 The meat, from what I can detect, has been simply roasted until it’s fall apart tender and it’s tossed on top of a fresh tortilla, with a squeeze of lemon and a sprinkle of greens on top. Presented to you on a paper plate, you get a choice of four bottles of condiments. I’m not sure what they all were, I just went for the chilli sauce and squirted some over the top of my tacos. 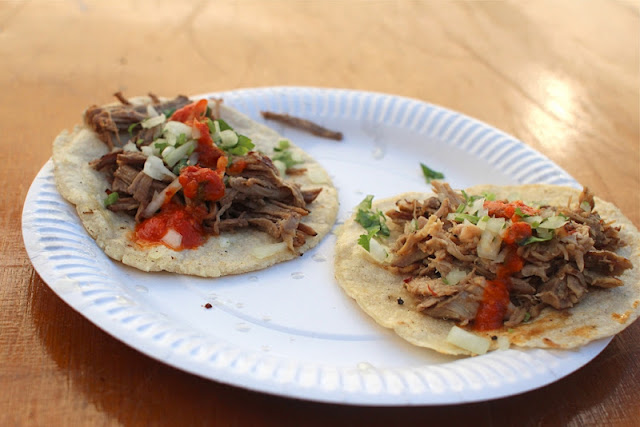 The tacos are simple, as they should be, but satisfying.
Be prepared to wait, I was lucky that I didn’t have a long wait, but I’ve heard stories and be aware that if you eventually make it to the front of the line, it might sell out. 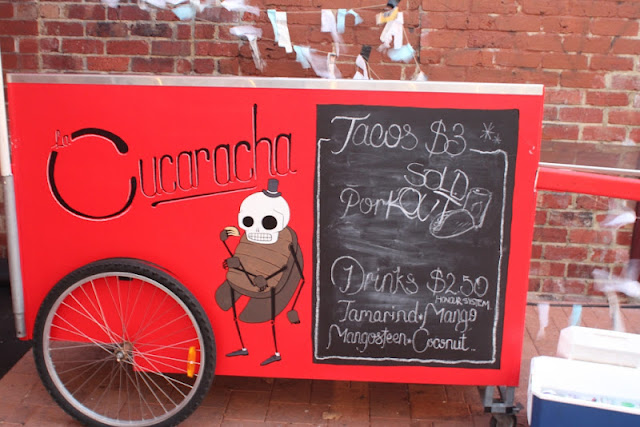 Posted by Blue Apocalypse at 9:50 AM