The God of Ramen - Taishoken 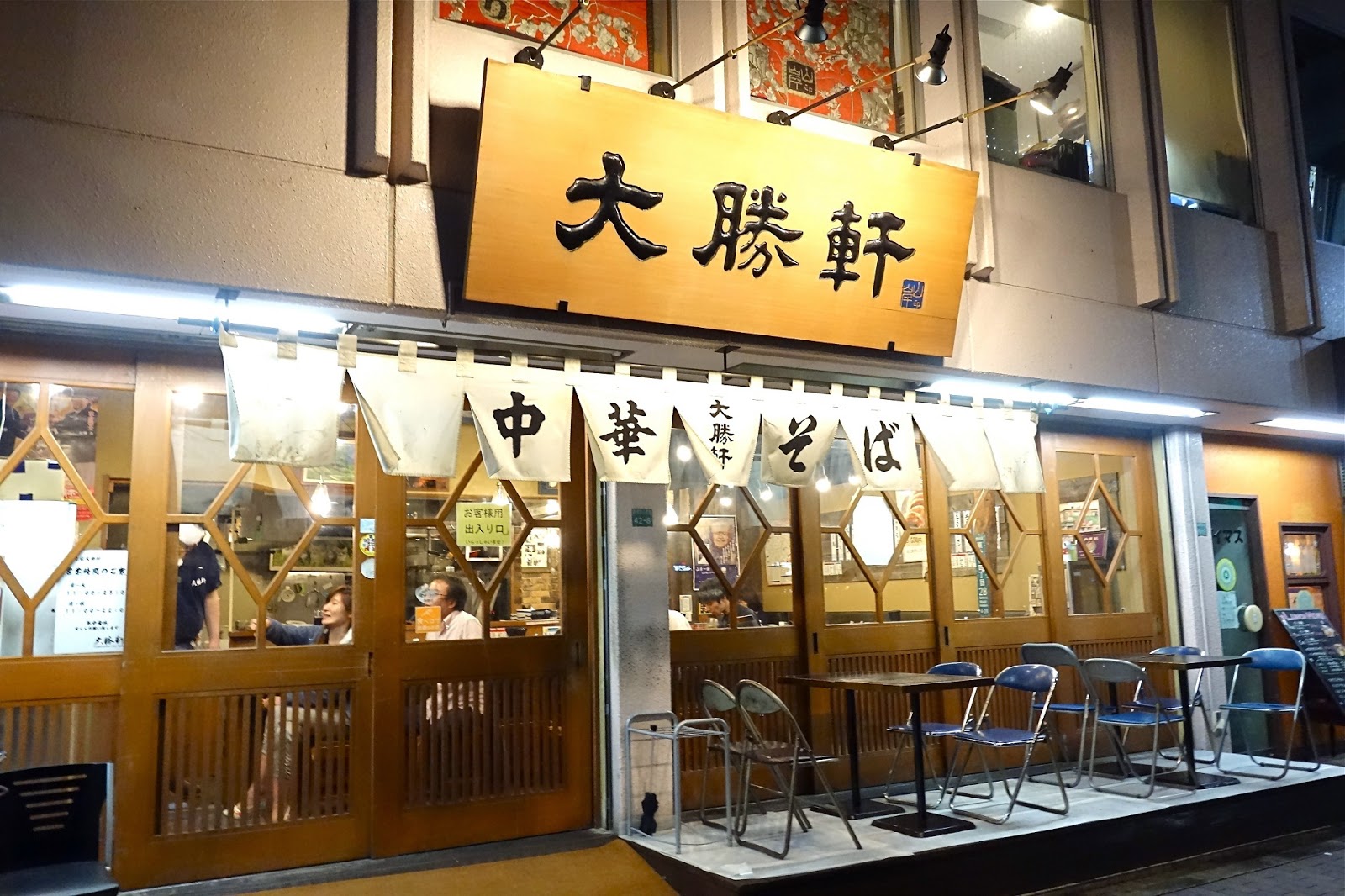 I had put together a list of places I wanted to eat at in Japan even though I knew that I wouldn’t get around to eating at most of them.
I knew that I couldn’t have my heart set on places as they would be difficult to find (the Japanese address system makes no sense to me!) and I would be surrounded by so much amazing food that it would be silly to spend too much time looking for “a” place and bypass everything else as if it they were irrelevant.

In Japan it’s so easy to eat well, even at convenience stores, and you can practically live off eating from Department store basement food halls.

But there was one particular dish in Japan that I wanted to eat a lot of.

There are so many ramen places in Japan it’s ridiculous, so much so, that there are whole blogs dedicated to ramen with never ending entries. Imagine a dish so populous that you could spend every day of the year eating it and there would always be a new place to try.

So I had a list of ramen places with the hope that I would get to a few of them. But if I could only choose one, it would be Taishoken.

I watched the documentary The God of Ramen last year and even though everyone raves about Jiro Dreams of Sushi, I loved The God of Ramen so much more. The God of Ramen traces the life of Kazuo Yamagishi and his struggles. Yamagishi was the inventor of tsukemen aka dipping ramen, where the noodles and broth are served separately and you dip cold noodles into hot broth. It’s a style of ramen that has become increasingly popular in Japan. Thus, Yamagishi is considered the God of Ramen. It’s a raw and unpolished piece of film, cheaply shot and does not have any of the slick production of food porn that Jiro Dreams of Sushi has, but the story is so much more compelling and heartfelt. You gain much respect for Yamagishi’s work ethic and his treatment of apprentices, but you also see the hardship, sacrifices and loneliness which I guess is part and parcel of being a chef sometimes, but you rarely see that side displayed in such human terms. I shed a tear when I first watched it, perhaps many.

Eating at Kazuo Yamagishi's Taishoken would really complete the story for me.

So how much did I want to Taishoken? Well I decided to tackle it on my first day, after a red-eye flight (14 hours flight time, plus 7 hours in transit in Melbourne), no sleep, arriving in Tokyo midday, I felt that the best way to start adventures in Japan would be to eat ramen immediately and specifically Taishoken. My accommodation was in Ikebukuro and Taishoken was located somewhere nearby at Higashi Ikebukuro, so I thought that I would have no trouble finding it with this map that I had printed from Google Maps prior to my trip. 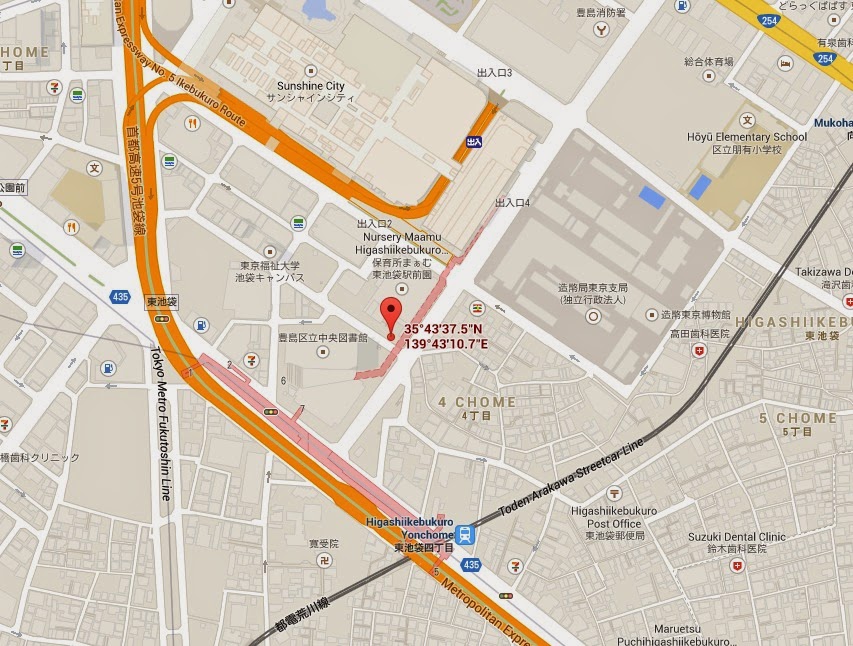 But after 2 hours of wondering around, I couldn’t find it and gave up. It was a good lesson to learn on my first day in Japan, I’m not someone that gives up on things easily but sometimes you just have to let go. There were so many other ramen places around, I knew that I could eat at any one of them and have a very good meal. Towards the end of my hunt I did walk into a bank with the intention of maybe asking for directions... but when I walked in everyone looked busy and I felt a bit stupid for taking up their time to ask for directions to “a” ramen place. Especially when I didn’t speak any Japanese and one thing that will always surprise me is how little of the Japanese population speak English. It was my first day in Japan and I guess I was still trying to acclimatise as an ignorant foreigner, I wasn’t ready for an awkward broken English exchange yet. So I left. I knew that I shouldn’t feel stupid and I knew that if I had asked, they would have been more than willing to help but then I was questioning myself - “why?”, why did it even matter anymore? Maybe I was feeling a little bit defeated, but there was also the thought going through my head of how I didn’t want to be someone who travels just to eat at “the” places, maybe instead of going to the ramen place that everyone talks about, I could eat at a cool ramen place that no one talks about because who needs the God of Ramen?
I ended up having lunch at Namco Namja Town, located in the Sunshine City shopping complex. An indoor food amusement park with a gyoza (Japanese dumplings) food court and I ate all the dumplings! Take that!

On my first day in Japan I was blessed with lovely fine weather but then at night it started raining and I had to buy an umbrella. Walking around the streets at night, I was extremely tired from a long flight and no sleep yet but before I hit my futon and call it a night, I needed to eat something. At this stage I wasn’t fussed. I was happy to eat anything as I would have plenty of opportunities for great food on the rest of my trip and right now it was just about getting some dinner before bed...something nice, warm and filling.

I was wondering around through the rain, not really knowing where I was or what food was available in the area and across the street I spied a place that was lit up and looked kind of cosy so I decided to check it out. 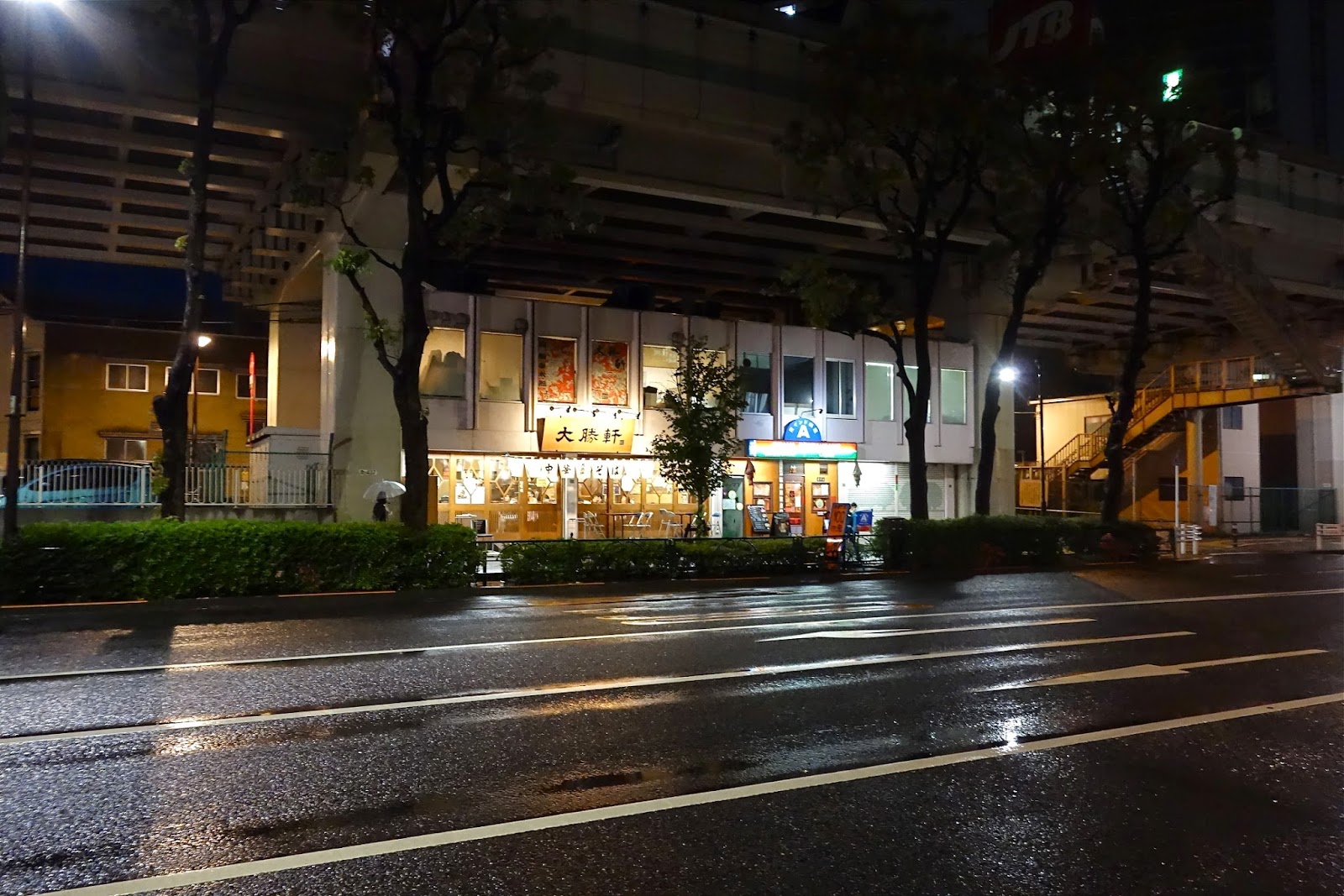 As I crossed the road and got nearer I saw through the window that all the chefs were wearing towels around their head like Kazuo Yamagishi (the God of Ramen). When I stepped inside, I saw photos of Yamagishi on the walls and I realised that I had stumbled onto Taishoken when I had spent most of my afternoon trying to find it. The biggest smile cracked across my face, as my head shook in disbelief. Like WTF?! 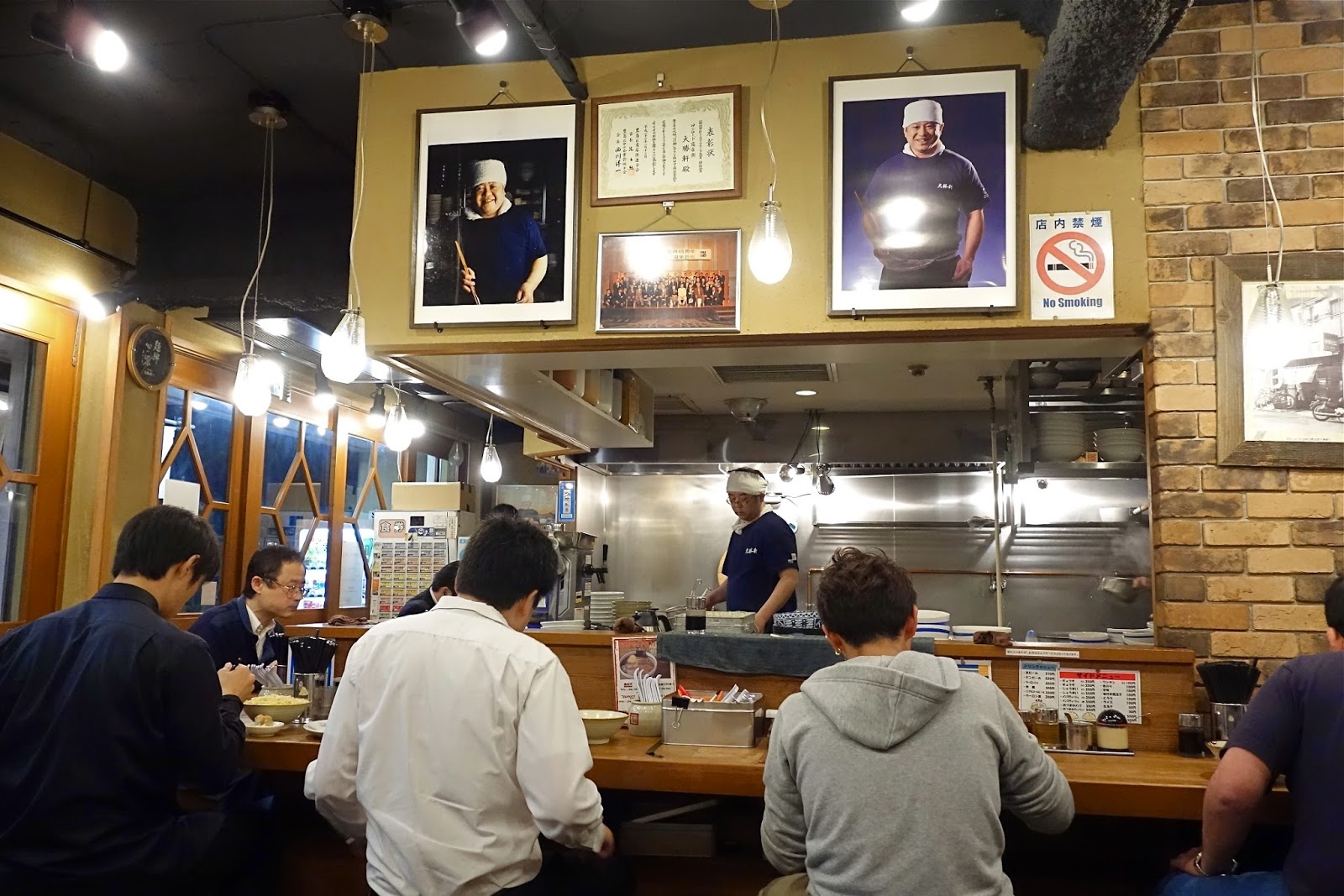 Funny how things turn out huh? When you are trying to find something, you can never find it, but when you least expect to find it, it appears!

So the moral of the story is that there really is a God of Ramen and that night he saved me from a cold raining night, tired, hungry and a bit deflated with the best bowl of hot ramen. It was just want I needed. 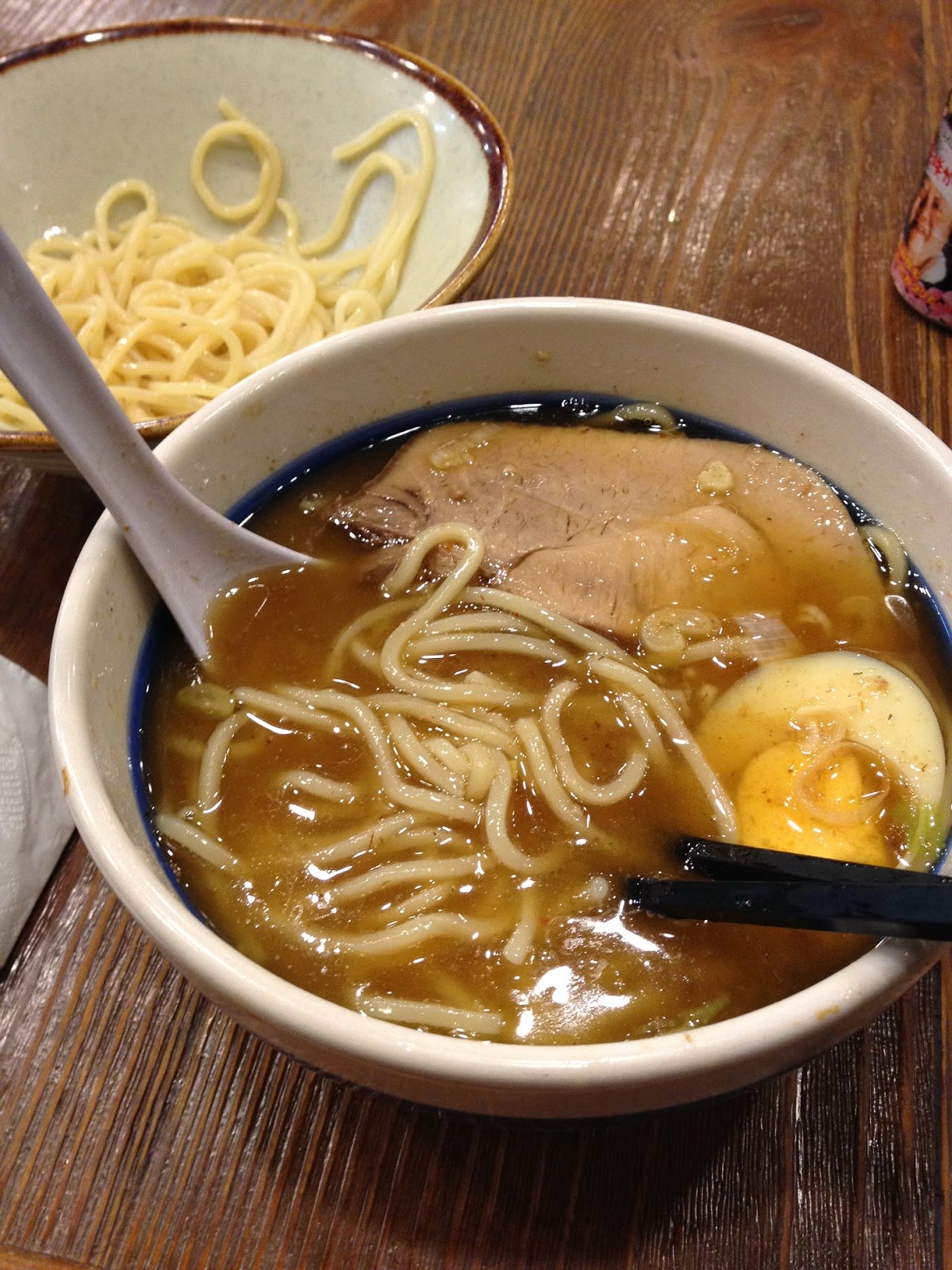 My first tsukemen ramen. The experience of dipping cold noodles into hot broth was a lot more enjoyable than I thought it would be, you want the burning heat of the broth but you don’t want to burn your tongue so the cold noodles temper this and it works well together. The broth is fatty, where you are licking an oil slick off your lips after every mouthful. The flavour of the broth was amazing – porky but with lots of depth to the flavour – you can taste some sweetness, some saltiness and savoury notes, it’s well-balanced so that it doesn’t feel like it’s just pork even though it is just pork you can taste. Remnants of many ingredients speckle the broth, so you can see that a lot has been put into the broth, slowing simmering for hours to make it taste so good.

...but this story could have been different.

I decided to not have internet on my mobile while I was in Japan. Initially I just couldn’t be bothered and figured I could easily sort it out once I was in Japan. I always had free wifi back in my hostel/hotel/ryokan and global roaming for emergencies, and in the end it was all I really needed. I didn’t need to be connected 24/7 and I decided not too because I’m on holidays!

And because after a while I really enjoyed just wondering around and trying to find places using a map. Instead of looking down at my phone the whole time trying to follow a blue dot, I looked at the roads ahead and studied them, I looked up at the buildings and signs around me. I used my gut feelings and intuition - anything that would give me a sense of direction. I started to notice the shape of streets – thick or narrow and the way they curved. I would count the number of 7-11’s I passed as a way of getting to my next destination. Because I was holding a map in my hand most of the time, I had people come up to me and ask if I needed help and would direct me to places. I was taking in all my surrounds and trying to remember little bits and pieces of places to get me through. And there was always that big feeling of satisfaction when I did find the place that I was after because I really did find it! Even though my hit rate was less than 50%, I was in Japan so it didn’t matter where I ended up. There was never a loss.

I could have found Taishoken within 5 minutes when I first arrived in Tokyo by just following Google Maps on my mobile if I was connected, and then I would be telling you how amazing technology is and how much it makes travelling so much easier as you can find any place you want in an instant. How I couldn’t live without my phone etc. etc.