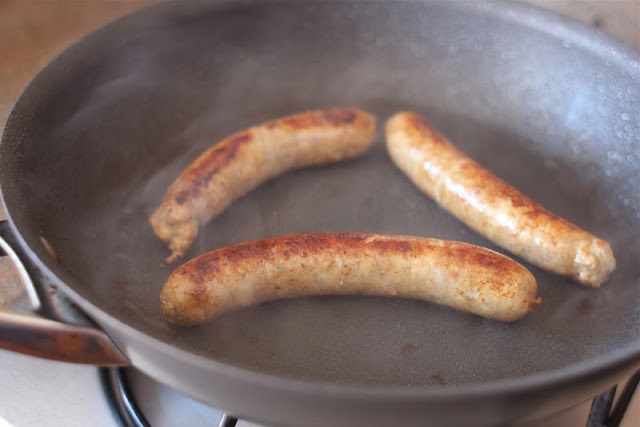 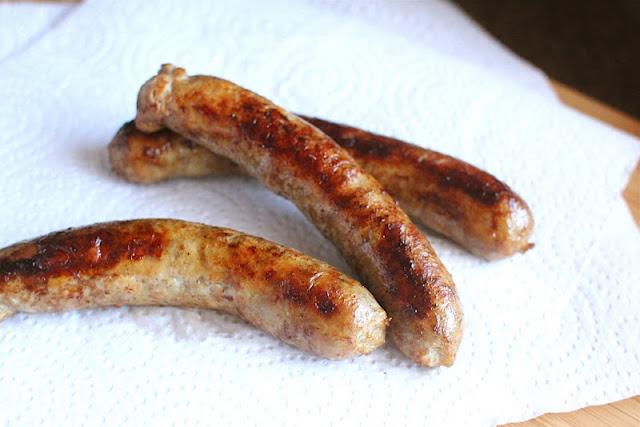 While it is easy to buy packs of sausages from the supermarket and get some pretty decent gourmet ones from your local butcher, nothing beats homemade sausages. The best thing being that you know exactly what is in them. Sausages are one of those types of food where all the leftover bits and pieces of meat get stuffed into them, it’s a scrapheap, so you never know what could be in your sausage. With homemade sausages, you choose what meat goes into it, and as long as you have the proper ratio of salt to meat and fat (generally sausage = 3 parts meat : 1 part fat and for every pound (0.453g) of meat and fat, use around 1 – 1 ½ teaspoon of salt), you can experiment with interesting flavour combinations, creating sausages that taste much better than the ones that you can buy.


Home made sausages are not hard to make but requires a bit of time to be set aside (2-3 hours) and if you are going to make them, I think that it’s only going to be worth it if you make a large quantity. Eat the sausages within a few days and any leftover sausages can be given to friends or frozen for several months.


Last weekend, my friend Rob invited me to one of his sausage making sessions. He has developed a love for making sausages and every few months he will make a huge batch (a few kilos) to eat and freeze.


I generally find the chicken sausages that you can buy to be pretty bland. We spent the afternoon making over 5kgs of chicken sausages. We made two types – a chicken, apple and chardonnay sausages, and jerk flavoured chicken sausages. Rob told me that chicken, apple and chardonnay sausages were his favourite. He has made them a few times before and he keeps going back to making them because they taste so good. I’ve only ever used dry white wines like sauvignon blanc in cooking but never chardonnay, and I have never cooked chicken and apple together before. It was an interesting combination that I would have never thought of putting together, I think that this is the best thing about making sausages at home, the possibilities are endless.


Making sausages requires a mix of meat and fat. Chicken sausages use a mix of thigh and breast meat, and the fat component comes from the skin. It’s very hard these days to buy chicken thigh and breast with skin on it. This means that the most economical way to make chicken sausages is to buy a whole chicken and debone it - remove the thighs and breasts for the sausage meat, reserve all the skin for the fat component of the sausage mixture, save the chicken wings to marinate for a tasty barbecue treat and the chicken bones/carcass can be frozen to make stock later on. It was great to be able to take a whole chicken, hack it apart and put every part of it to use. Nothing was wasted. This was also the first time that I have deboned a whole chicken (good thing that all the meat was going to be minced as I did a pretty hatchet job of it). We deboned eight whole chickens which provided around 4.35kg of meat and 950g of fat/skin. One of the advantages of making chicken sausages is that you know how the chicken has a kind of slimy feel to it, well it just slides through the mincer! Chicken is easier and quicker to move through the mincer than pork or beef. 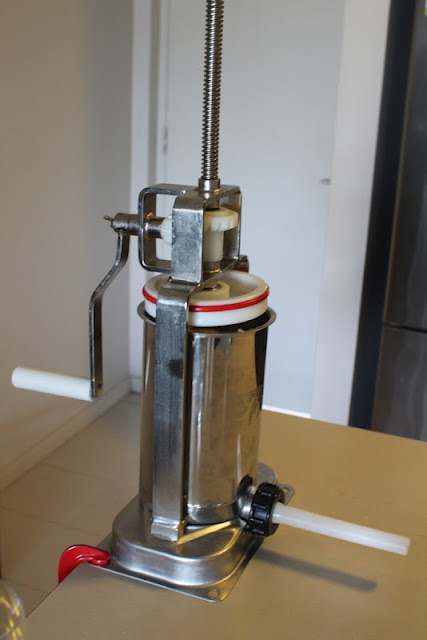 Rob has a special sausage filler that he bought when he was traveling around New York. You can source one online for around $200 on ebay. It is a worthwhile investment if you are keen on sausage making. Most meat mincers come with sausage making attachments these days but as the meat is being forced through a small chute and constantly being rotated around, this causes friction and results in a bit of heat being generated as you process everything through, it also ruins the texture of the sausage. When you are making sausages, you want to keep everything as cold as possible to inhibit the growth of bacteria. With the special sausage filler, you fill the large cylinder in the middle with the sausage mixture and slowly push it down, it’s a compression style pump so there is less heat transfer and more sausages can be made faster. 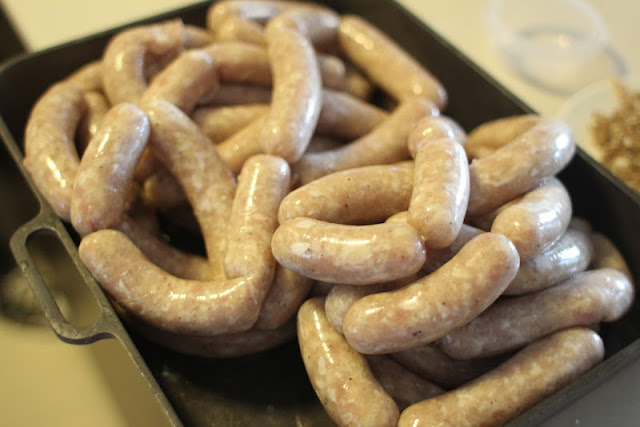 (Chicken, apple and chardonnay sausages twisted into different sized links so you can have little cocktail sized sausages as well as regular length ones)


The quantities of ingredients in the recipe was tripled to make approximately 2.7kg of sausages (using half of the chicken/fat mince that we prepared from 8 whole chickens).


• 2 small sheep casings (You can buy sheep casings from the butchers which come packed in salt to preserves them)
• 2 pounds (~900g) boneless chicken thighs and breast with skin, roughly chopped (you can also use just thighs only)
• 2 teaspoons kosher or course salt
• 1 teaspoon ground ginger
• ½ teaspoon freshly ground black pepper
• 1 Granny Smith apple, peeled and chopped
• 2 tablespoons minced onion
• ¼ cup of chardonnay (Preferably one that you like to drink, a glass for the sausage mixture and a few glasses for yourself while you are making the sausages)


Soak the casings in water until they have softened and then run water through the casings to flush them and rinse out the salt (this also allows you to check if there are any holes in the casing). Take a casing and open up one end and fill the entire casing with water from the tap (using a small funnel to do this makes it easier), repeat this at least 3 times. Keep all the casings stored in a container of water with a little vinegar until you are ready to use them (the vinegar improves the texture and makes them more translucent).


The sausage mixture is minced twice. Firstly, grind the chicken and skin through the fine disc of a meat mincer. In a large bowl, combine the minced chicken/fat, salt, ginger, pepper, apple, onion and chardonnay together, and mix well using your hands for a few minutes until thoroughly blended. Then grind the seasoned mixture through the fine disc of the meat mincer again.


Affix one end of a casing over the sausage stuffing attachment (long thin tube) of a sausage filler (or meat mincer if you don’t have a filler, another option is a small funnel that I saw in action during a Mondo cooking class on charcuterie). Slip on and push the entirety of the casing onto the length of the tube so that it forms an accordion-like pleat and tie a knot at the end of it. Keep a bowl of water next to the sausage filler so that you can dip your hands into it and keep the casing lubricated as you are stuffing the sausages. Add the sausage mixture into the body of the sausage filler. 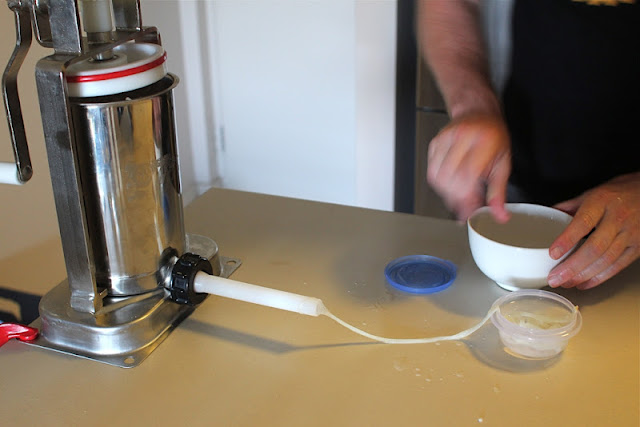 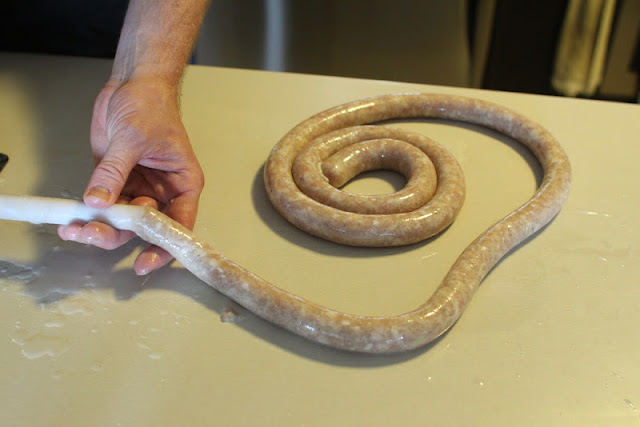 I found that filling the sausages can be quite tricky, as it’s important to get the right amount of filling in the casing. You want it to be tight so that you don’t get too many air bubbles inside the sausage, but not too tight as you need some leeway for twisting the long coil into individual little sausages, so that it doesn’t burst. It's a matter of trial and error, and getting a feel for the right texture. This was my first hands on experience of filling sausages hands on and I ended up with a few burst casings, and lots of unevenly twisted sausages so they didn't all look perfect but it didn’t matter too much as they were still edible :)


Prick any air pockets and twist the sausage into desired link lengths. Using two hands, pinch off what will become two links and then spin the link that you have between your fingers away from you several times (make the links pretty tight, you want any air bubbles to force their way to the edge of the sausage). Repeat this process down the coil, but spin the next link towards you several times. Continue this way, alternating the direction that you twist so that the previous link does not unravel, until you get to the end of the coil. Note: if the casing is tight, make longer links to avoid increasing the pressure in the casing and causing a burst link. 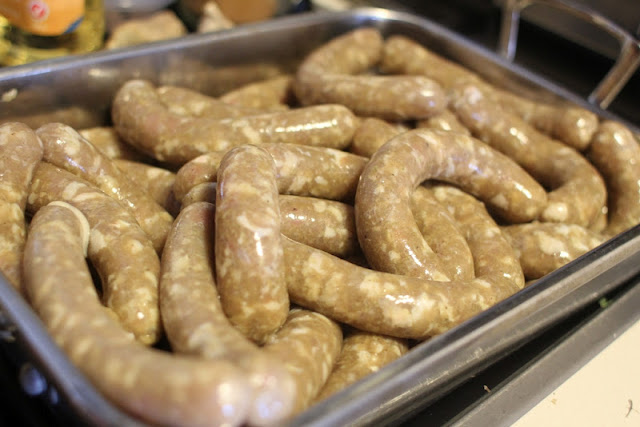 We also tried making some jerk style chicken sausages. ‘Jerk’ is a specialty from Jamaica in the Caribbean, it refers to the hot and spicy mix rubbed on meats before grilling.


Two batches of this marinade mixture were made. One batch was used to marinate the 16 chicken wings leftover from deboning 8 chickens. The other batch was added to 2.7kgs of minced chicken meat/fat to make sausages.


Combine all ingredients (except for the chicken) into a food processor and give it a few pulses until a smooth/runny consistency is achieved.


Wash chicken wings and pat dry with paper towels so the marinade can really stick onto the wings. Pour 1/3 of the marinade on the wings and using your hands, massage the wings with the jerk marinade. Allow this to marinate for at least 30 minutes.


Cook the chicken wings by roasting it in an oven for around 40-60 minutes, turning once at 200C (400F) degrees or grilling them on a barbecue for 14-18 minutes, turning a few times until cooked through.


To make jerk chicken sausages - we incorporated one batch of this marinade to around 2.17kg of chicken mince and 457g of chicken skin/fat as well as 6 teaspoons of salt. Then stuff the mixture into casings (follow the method above).


All the sausages were refrigerated uncovered (to allow them to dry out a bit), overnight for the flavours to develop and to allow the shape of the sausage to set in the casing. It was hard to resist eating the sausages straight away but some things taste better the next day so it’s worth the wait. However, the barbecue was fired up to make some patties with the leftover sausage mixture and grill the jerk chicken wings which had been marinating while we were cranking out the sausages, so I got a taste of what I was in for the next day when the sausages would be at their optimum. 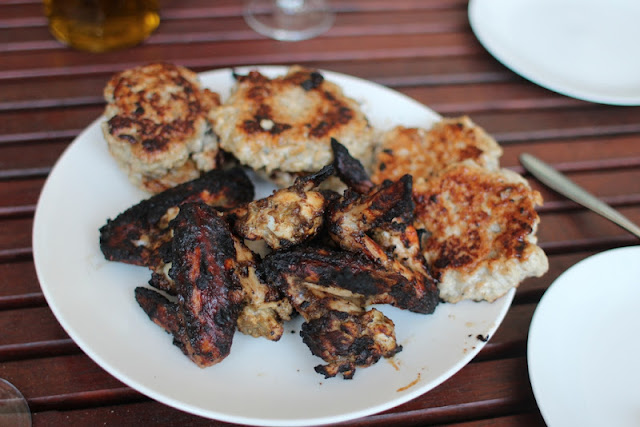 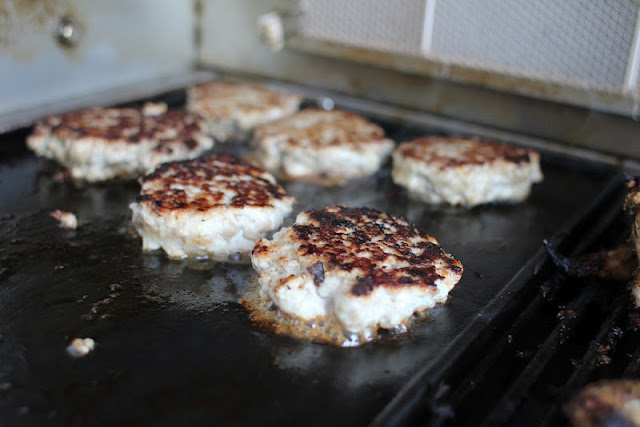 (Sausage meat patties on the barbecue)

The chicken, apple and chardonnay patty was a pleasant surprise. I couldn’t believe how amazing this combination of flavours was. I also really enjoyed the jerk chicken wings, it was my first taste of Caribbean food and I loved the delicious array of flavours in the marinade and it had a nice hit of heat from the chillies. 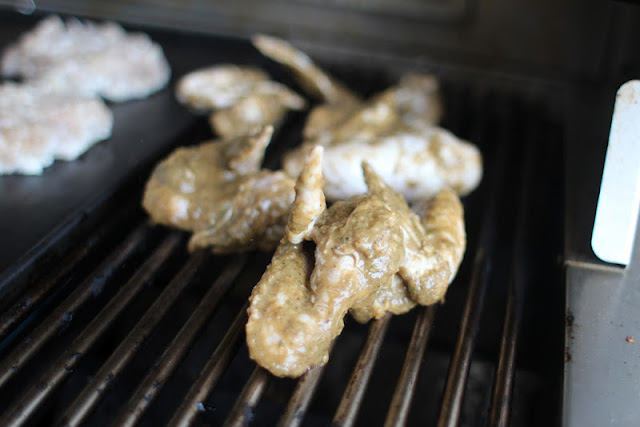 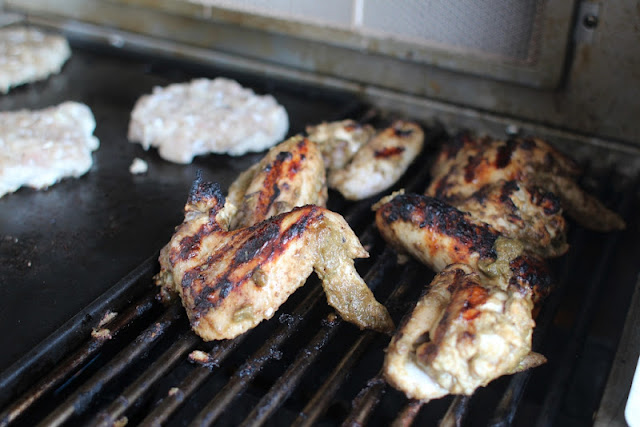 Having chicken wings that are grilled on the barbecue is always a treat, love the charred texture and how it adds a smoky aroma to the marinade. 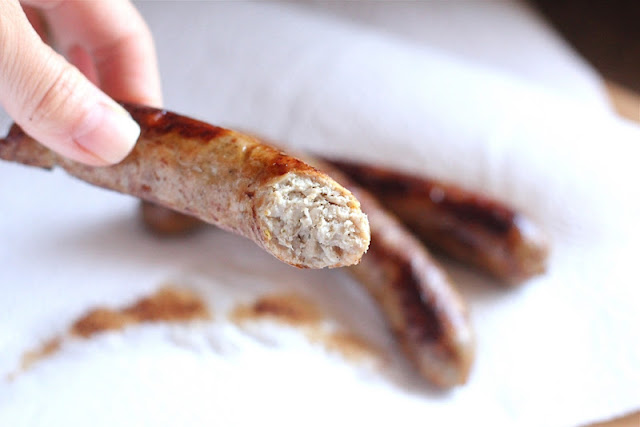