Asia House on Stirling Street in Perth is a hub of multicultural activity. On the second Saturday of every month, the Burmese food fete is held in the main hall from 10am to 1pm.

I have not eaten any Burmese food before and Burmese cuisine does not have a prominent place in our culinary landscape. As far as I’m aware, there aren’t any Burmese restaurants in Perth, although some pan-Asian restaurants serve a few Burmese dishes, so the fete is an excellent opportunity to have some authentic Burmese food. It also appears to be a way for Burmese people to enjoy the food they love outside of their own home, all the food has a home cooked feel to it, with an assembly of aunties behind the stalls selling the food they have made with secret recipes that they won’t share. 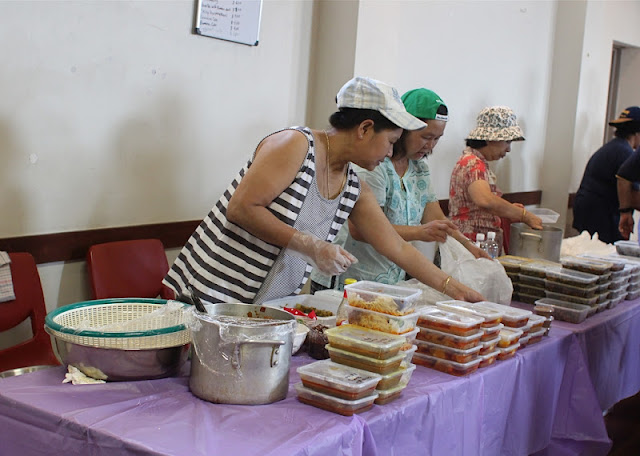 I asked my Burmese friend MM from high school to accompany me to the first Burmese Food Fair of 2012, we had been planning to catch up for a while and this was a great way to hang out, enjoy some delicious food and I could also pry her for some information on the food on offer.

Upon entry you are required to buy food vouchers and any unused vouchers can be exchanged back for cash. 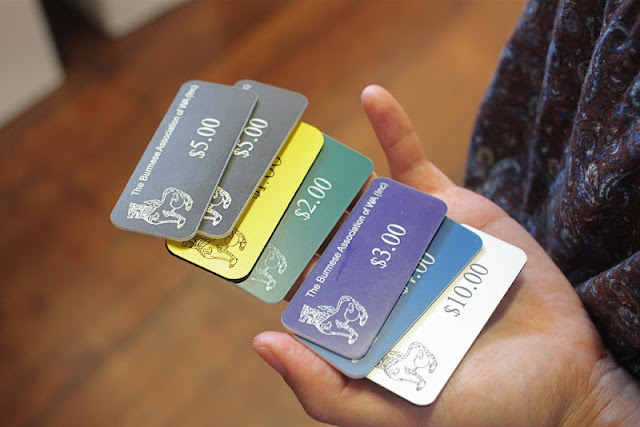 Chinese and Indian influences on Burmese cuisine (an effect of its geographical location) can be seen in the wide selection of foods on offer such as curries, samosas, biryani, salads, noodles soups, beverages (like faluda) and sweets. Most are packaged in take away containers ready to be bought, some dishes are made fresh to order like the thoke salads and noodles soups, and you can sit down and enjoy them. 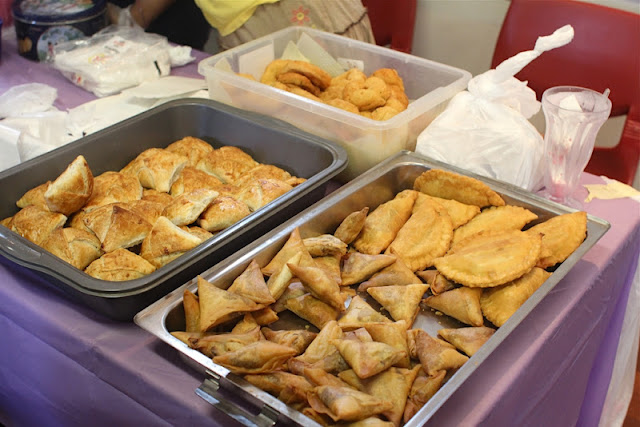 Thoke is the Burmese word for salad, it consists of a main ingredient like noodles, potato or tofu which is mixed with various vegetables, seasonings and garnishes. Burmese tofu is unlike the tofu I am used to eating, it is made of split peas rather than soy beans and has a firm jelly like texture. 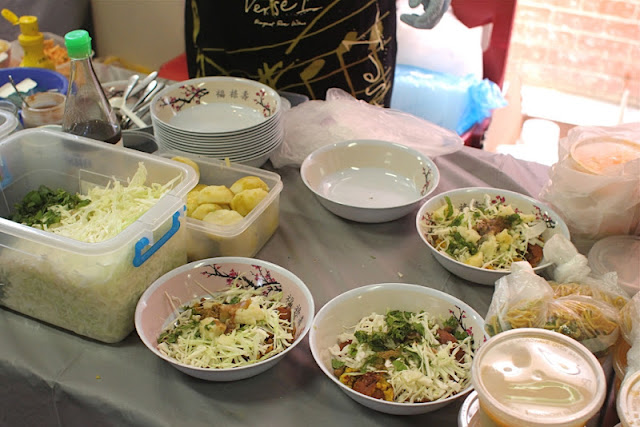 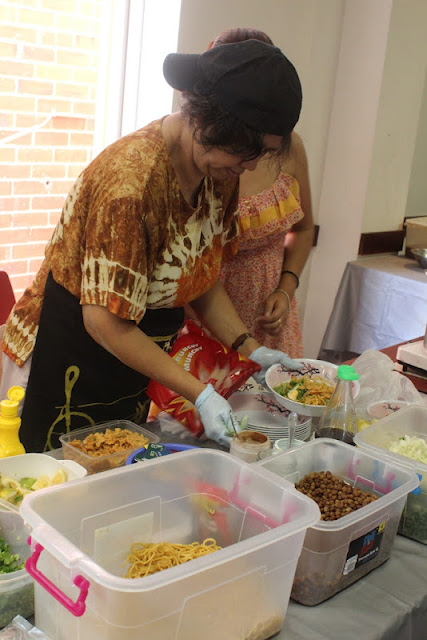 There were two different noodle soups on offer. I spotted what I thought was laksa but later found out to be ohn no khao swè which is a Burmese coconut chicken noodle soup that bears similarities to a Malaysian laksa. But what really caught my attention was the big pot of moke-hin-gar brewing away in the corner, it’s a fish based soup with rice noodles. The chef who watches over the stove is a friendly character and wears an Australian flag apron, and he is working non-stop as it appears that everyone here wants a bowl of moke-hin-gar. It’s sold as Burmese’s favourite noodle soup and for $4 I could not believe how cheap it was (if I want some sort of noodle soup dish in Perth, I generally have to pay at least $9!). Moke-hin-gar is a traditional Burmese breakfast dish, it’s the dish that all Burmese want to wake up to eating, it’s comfort food and eaten throughout the day as well. It’s like the Burmese equivalent of Vietnamese pho. 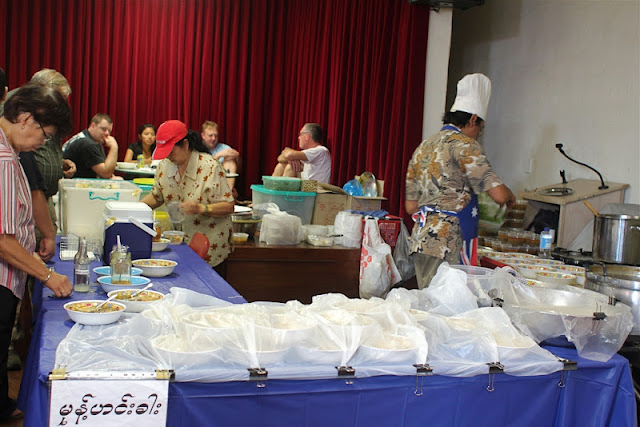 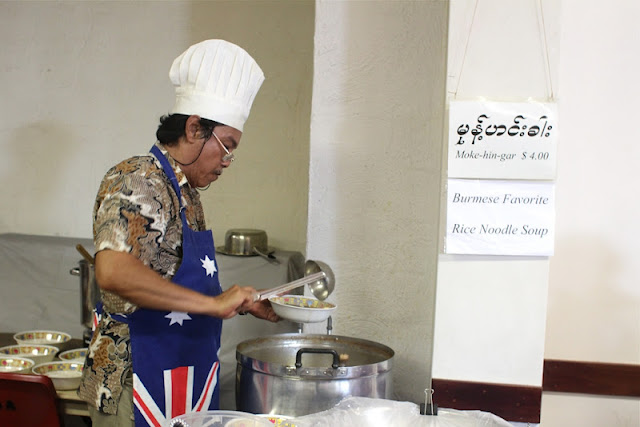 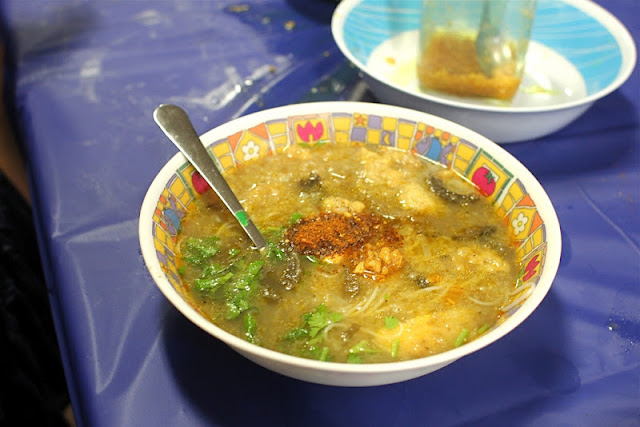 Bowls of portioned rice noodles sit under a plastic sheet ready for an order to come and have hot broth spooned over the top straight from the simmering pot. The moke-hin-gar comes garnished with a little coriander and various pickled vegetables, onions, crispy fried fritters made with chick peas, a slice of boiled egg and then you have the choice of adding in chilli power, fried garlic, fish sauce and lemon juice, to adjust the flavour to your desired taste. We took our bowls to the traditional Burmese tables at the back of the hall, they are round and low and you have to sit on the floor. I only got a spoon which I found weird as I always eat noodle soups with chopsticks. My friend MM told me that Burmese eat with their hands and a spoon may be used but rarely ever chopsticks. The good thing was that the rice noodles in the bowl of moke-hin-gar were in short lengths so that chopsticks were not really required. MM told me that the ingredients that make up the broth of moke-hin-gar are generally fish, roasted rice flour, roasted gram dahl flour, onion, garlic, ginger, banana tree stem, lemongrass and fish sauce. I felt right at home with the bowl of moke-hin-gar, it’s characteristically pungent, fishy taste and balance of sweet and sour flavours felt very familiar to me as this is the kind of food that I am used to eating, but it was a new combination of flavours and had a distinctive taste unlike anything that I have had before. I’d be quite happy to eat this for breakfast all the time. 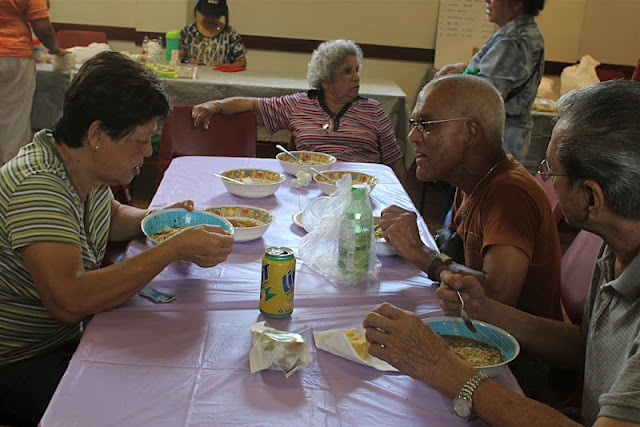 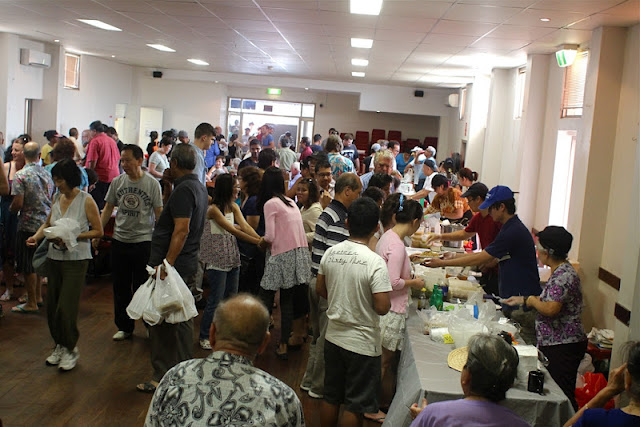 There was a big turnout for the first Burmese food fete of 2012. Ethnic food fetes always have a certain air about them, organized at a local level with people coming together to prepare and sell foods from their cultural heritage, it’s a friendly atmosphere and provides a celebration of food which is usually not readily available. 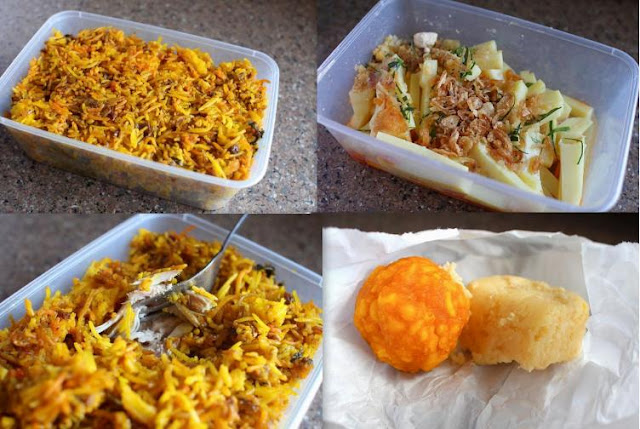 I’m looking forward to going back next month to try some other dishes.

The dates for the Burmese Food Fete for 2012, available on the Burmese Association of Western Australia website.

Posted by Blue Apocalypse at 1:13 PM